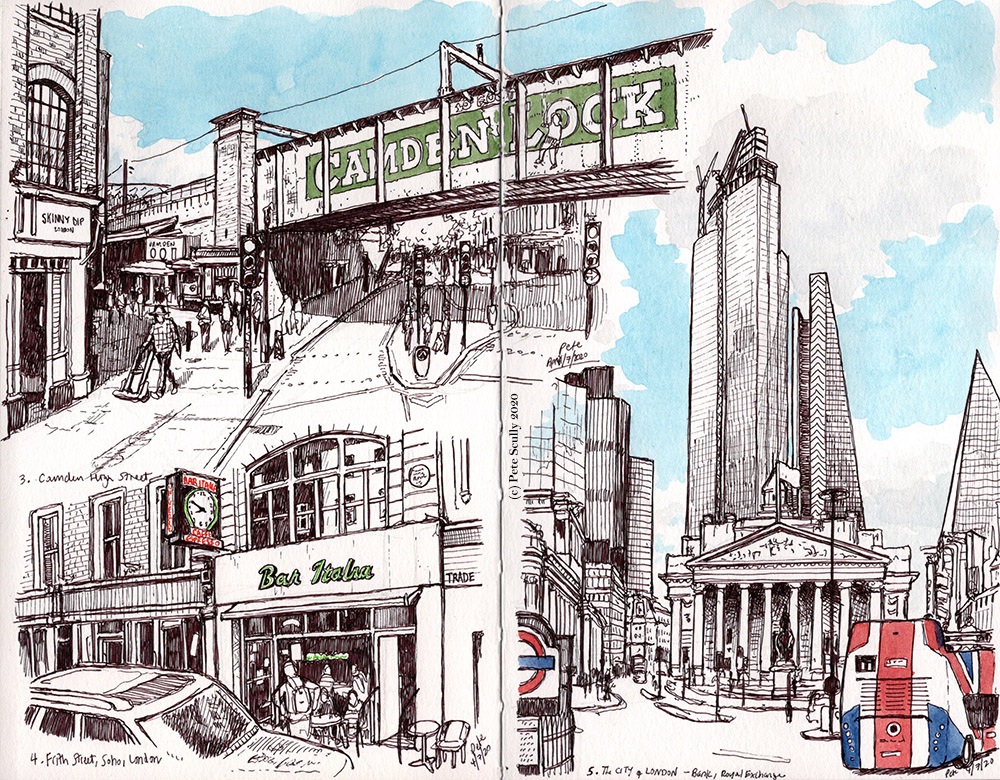 I may have spent too long in London on this virtual journey, not leaving space for some other places along the way – your Southamptons and your Swindons, your Leicesters and your Lutons – but in my defense I am from London, so I don’t mind being London-centric, and also I didn’t see anything I wanted to draw in those places, although if I went in real life undoubtedly I’d feel different, except in Luton. London is so big and diverse though, and I was still looking at places that meant a little to me. The next stop was in Camden Town, top left in this spread. This is Camden High Street, the point where the railway bridge crosses the famous Camden Market. Camden Lock itself is around the corner from here, where the Regents Canal cuts through on its way from Little Venice to the Docklands. I come out in Camden almost every time I come back to London, as it is easy for me to get to and all my old favourites are there, even if they aren’t really my favourites much any more. Many memorable (and a fair few unmemorable) nights out round here over the years, with the usual lads. A long time ago late nineties early noughties I used to go to the Mixer with my mate Tel and we’d play pool, or rather he would play pool and I would sit there watching him win game after game while I chatted to people. It’s what I like about the pubs in Camden, you always get a conversation. Not always an interesting one but you meet some characters. Me and my mate Roshe would always get into long drinky conversations with interesting people in Camden, like the fella we met from Sweden a couple of years ago late at the Hawley who was in London to take photos of the Cure. Camden has too many memories to count, but I still think it’s a mess. It’s supposed to be, long may it be.

Right that is enough of Camden, time to go into town and go to Soho. Northern Line maybe, or just jump on the bus, end up on Frith Street, go to get a coffee at Bar Italia. Now it must be pointed out, I don’t drink coffee, I don’t like it at all. Yet the only time I had a coffee drink that I liked was right here at Bar Italia, a cappuccino at about 3:30am, and admittedly it was in about 1996. That is in the twentieth century so yeah, it has been a while. You might know Bar Italia from the last song on Pulp’s Different Class. I used to come here for a little while back in the mid-nineties when I was briefly going out with a girl from Perugia, she worked at a Soho amusement arcade and we would usually meet up at midnight to go to clubs like St Moritz or the Wag, and then with some other Italian friends we’d go to Bar Italia while the sun was coming up, before I’d get my Night Bus back home to Burnt Oak from Trafalgar Square (often getting home and not even sleeping before heading into work at the Asda coffee shop next morning – I really had so much energy when I was twenty). That summer reminds me of 1996, the Euros, that Gareth Southgate penalty miss, seeing the Pistols at Finsbury Park with my uncle Billy, going to the Hellfire Club on Saturday nights with my friend Andrea from Hungary, working at Asda on weekends, and ending up at the end of the summer on a bus to Germany to spend a year which lasted three weeks. Memories that I’m pretty sure happened but all blend together like old posters pasted on top of each other on an old wall that was knocked down years ago. You know when memories of people and places vanish but jump out again in dreams years later? Time to leave that cappuccino behind in Bar Italia and get out of Soho now.

The final sketch in this spread is at Bank, right in the heart of the City of London. The City of London is its own thing, an area known as the Square Mile that has a degree of independence dating back to the twelfth century. Like, we in London distinguish “London” from “The City” but it’s a real distinction – you see statues of silver dragons marking the entrances into the City, it is managed by the Corporation and governed by the Lord Mayor, and if the reigning monarch wishes to enter the City they must attain permission from the Lord Mayor. They also have their own police force – Greater London has the Metropolitan Police, those bobbies from New Scotland Yard, but the Square Mile has the City of London Police, which have distinctively different police constable helmets with little crests on them. The location of this sketch is right next to the Bank of England (left) and Mansion House (unseen on the right), looking towards the Royal Exchange, and a whole load of skyscrapers, new ones going up all the time. This skyline has grown increasingly spiky since I left England, like the City is going through its experimental haircut phase. There’s an open-top bus. The thing this junction reminds me of most are my days as an open-top bus tour guide twenty years ago, I loved going through this are, so much to talk about, and on a weekend when there was no work traffic you had to get those facts out quick, no time for rambling. Mention the grasshopper on the weather vane, talk about the Lombard bankers, catch your breath because the Great Fire is coming up and then you’re at London Bridge. Of course if it’s Thursday afternoon and traffic is crawling you can really start telling stories.

From here, I probably should have moved beyond London on the virtual tour, to give myself a few more spots for your Blackburns and your Bradfords, your Warwicks and your Weymouths, but not wishing to appear North-London-centric I went east to Stratford, and then south-east to New Cross, then south to Tooting, before finally finding the road to Kent, like a Chaucerian wandering about lost, unable to read a map written in the French of Paris when all I know is the French of Stratford at Bow. Dammit I was saving that joke for the next post, not that anyone will understand it. All will be revealed, I’ll see you at Stratford Town Hall…