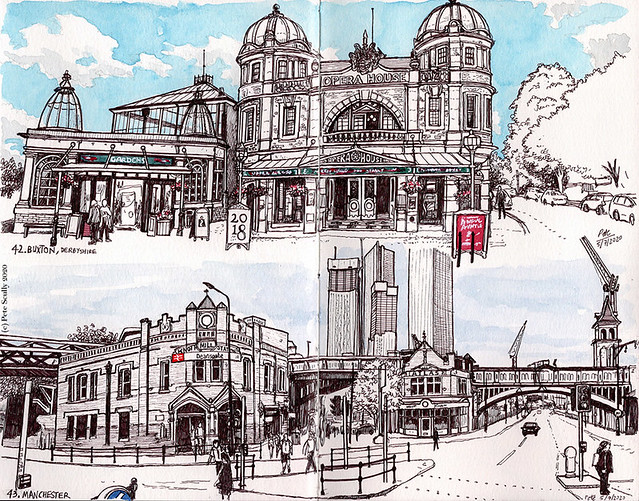 I’ve never really been to the Peak District, except passing through it on a coach once as a kid (and even that I’m not sure about, I might have imagined it), but I am told it is very nice. One of my friends went there by himself a couple of years ago to rent a cottage and write a book, which sounds like a great idea. I’ve always thought that would be fun, but I’m not sure what I would write about. I’d just end up drawing, and then write about it like that book I admire so much, Richard Bell’s Britain. It would sound a bit like this I suppose; I’m not sure I could stay serious. On on earlier post I compared the Battle of Stamford Bridge in 1066 to a grueling extra-time football semi-final ahead of a final at Hastings on the other side of the country; a couple of posts ago I was talking about “Hereward The Woke”, while in the last one I was telling you about my nightmares about Sheffield and nuclear war. Eh, it’s usual for this site I guess. Some days I’m serious, some days silly, some just confusing. On my original blog, when I started posting drawings and not just observations about my new life in America from a mid-2000s, early 30s perspective, I would make the accompanying text font really small so you had to squint as if to say “look at the drawing, don’t worry about the nonsensical text”.

Anyway this counts as “going on a bit”, so let’s get on with it. The top sketch is in the Peak District town of Buxton, Derbyshire, which I hadn’t intended on stopping at and sketching, but wow it’s very nice there, very nice indeed. I know Buxton from the spring water, which I am going to say is very nice even though I’ve never had it, because the old adverts in England made it look delicious. The building I chose to draw is the Buxton Opera House, a beautiful looking building. It was built by the same guy who designed the London Palladium, the London Coliseum, and the Hackney Empire, Frank Matcham. Buxton also makes me think of one of my favourite sketchbloggers who lives in this neck of the woods, Andrea Joseph, who I followed online in the early days of sketchblogging, 2006 era. Back in those days I’d check in on her blog regularly, along with Jason’s, and Gabi’s, and Jana’s, and Suzanne’s, and Martha’s, and France’s, and Daniel’s, and Julie’s, and more and more others as I found them, learning a lot from them along the way. Buxton also reminds me of Adam Buxton, who is not from here and has nothing to do with the place, except his name. I really like listening to his podcasts though, old Buckles, while I’m out sketching or jogging, he makes me smile.

Right, moving on from the Peak District (whenever friends from London say that it sounds like “the Pete District”) I took the road up to the city of Manchester. I first properly visited Manchester during the Urban Sketching Symposium there in 2016, which I really enjoyed, one of my favourite symposiums. I was astonished how sketchable Manchester was, especially the Castlefields area. See my Manchester sketches here. And yes, it rained every day, and I loved it. Sat on the pavement in the rain eating chips in gravy for lunch with a can of orange Tango is up there with my favourite memories. Though it was quite noisy in the area where I stayed downtown, which I think was on the edge of party central; thankfully the bedroom of the apartment I rented had double glazing. I do remember walking past this train station at Deansgate early one evening when I was wandering about lost, looking for the pub where everyone met nightly during the symposium – I had taken a wrong turn, those famous Scully map reading skills not working out on this one occasion. It happens sometimes, I get lost, but hey it’s the only way to really discover. I like drawing railway bridges. Manchester is a famous city you’ve all heard of, football, music, telly; the only time I had been here before 2016 was when I visited the old Granada TV studios with my family back in 1989, and we did the studio tour, seeing the Coronation Street set. My mum loved that show. The old set has now been demolished and rebuilt at the new Granada Studios at Salford Quays.

Well that is Manchester, and I want to go back there and eat chips in gravy in the rain again, but we must press on to the city with my favourite accent in England, Liverpool, and the nearby city of Chester…