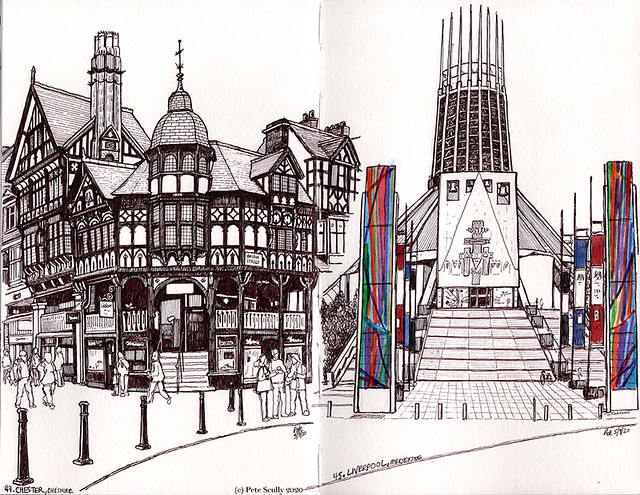 Continuing the virtual tour through North-West England now, with one place I’ve never been to, and another place I have not been too in a really long time. As I wind my way through England I am going through the emotions that I went through when I drew all of this. Now at this stage in the virtual journey, in the real world the living-room flood had happened and I’d relocated upstairs; I only just moved my desk downstairs again, much to the annoyance of my cat Whiskers who has gotten very comfortable spending his afternoons on the downstairs desk chair. Now he tries to push me off at around 2pm so he can get his usual nap in. In the virtual world, I was still passing through each virtual street, with so many places “temporarily closed”, the image of a country in limbo. My relationship with England waxes and wanes in my absence, as it did when I lived there, some days I just think nope, place drives me nuts, other days I miss it terribly, even missing places I have never stepped foot. Often I just miss the Cadbury’s chocolate and the Jaffa Cakes, and silly things like the meal deal sandwiches at Tesco Metro. I don’t know, it makes me feel sad sometimes, especially during this whole thing. Anyway.

So, first stop on this spread is the city of Chester, in Cheshire. This might be my favourite drawing in the whole damn book. I love nothing more than drawing timber-framed buildings, and the whole of downtown Chester (“downtown”, I’m so American now, I’m going to forget what a Jaffa Cake is) is filled with this sort of architecture. I should draw a whole book just of timber-framed buildings. I am sure there must be lots of sketchers in Chester, busy drawing these all the time, but if they aren’t called “Chester Drawers” I’d be really disappointed. While there are medieval buildings in Chester, most of these ones such as this are from the 19th Century’s “Black and White Revival”; this one was built by one of its great proponents, T. M. Lockwood. I bet his friends called him “Trademark”. I don’t know much else about Chester, except that it has a zoo, and that I think my nan lived there years ago before she lived in London, I remember my mum telling me (I might not have been listening, for all I know she was telling me about her chest of drawers). It’s funny visiting places where ancestors lived (even if it was only for a short time and might actually have been me mishearing a story about a chest of drawers). Chester is actually Roman though, the imperial city of “Deva”. On AA road maps in the UK (at least ones I used to read) the Roman name of the city would be listed underneath the modern name on a map, usually in small caps. While it is interesting for someone like me to know that Chester was once DEVA, York was once EBORACUM, St. Alban’s was once VERULAMIUM, I’m not sure why it’s important to the motorist trying to find their way from the A41. Unless the AA are expecting the Romans to return someday.

Speaking of the AA, the next stop is Liverpool. That is a reference to the joke, who do you call when your car breaks down in Liverpool? The “AA, Calm Down”.  That is a reference to a Harry Enfield sketch about Scousers, which itself was a parody of characters from Liverpool-based soap Brookside, which I’m not ashamed to say was one of my favourite shows years ago. The Liverpool accent is probably my favourite English accent, much better than my own one. Years ago when I spent a year in Provence I directed a university play, an adaptation of The Lion, The Witch and The Wardrobe, and my flatmate Emma who is from Liverpool played one of the “Scouse Squirrels”. Every time a Davis squirrel gets all aggressive with me on campus now I hear the Scouse Squirrels voice in my head. Liverpool is most famous for the Beatles, who I love, and also loads of old comedians like Jimmy Tarbuck, and of course Cilla Black, singer and beloved TV presenter. I visited Liverpool a couple of times when Iw as a kid, while we holidayed in nearby Southport, the last time being back in 1989. That was a long time ago! At that time, local football teams Liverpool and Everton were trading league titles (although in that year Arsenal won it, though Liverpool got the FA Cup; it was also the year of Hillsborough). We did all the tourist stuff, went to the Beatles museum (I remember getting a cool Beatles badge that I actually gave to a girl a few years later), took a ferry across the Mersey, went to the Albert Dock and saw the floating weather map from This Morning (although I’ve since heard about the weather man from that map; ughhh, glad he’s in jail), and visited one of Liverpool’s TWO cathedrals. We didn’t go to the big Anglican cathedral, which was designed by Giles Gilbert Scott (he of the phone box, Waterloo Bridge and Bankside Power Station, aka Tate Modern); shame as that one is massive; we could see it across the city. But probably because my mum had become a Catholic in the 80s we went to Liverpool Metropolitan Cathedral, the modern triangular spikey looking building which I actually thought was totally brilliant. I really like this odd looking church, built in the 1960s, because on the inside the colourful light is beautiful. It reminds me of the Jedi Temple. Liverpool has a very Irish heritage; it’s not surprising given how close it is, but this was where a lot of Irish immigrants landed in the 19ths century during the Famine, many settling and many leaving Liverpool on a big boat to America. Lots of the Irish songs I learned as a kid were about this very thing. I never expected I would end up in America myself. Actually the reason we would come to Liverpool is because, as I mentioned, we were holidaying in Southport at the Pontins resort, which hosted an annual Irish Festival in the 1980s, so we always had a lot of traditional Irish music on in our house. I’d like to come back to Liverpool, come sketching, maybe visit my old flatmate Emma, not seen her in nearly two decades. I expect it has changed a lot since 1989. The football team just became league champions for the first time since 1990. There aren’t as many Beatles any more, but a lot more Beatles monuments. I assume there is still a ferry across the Mersey, though I expect people take hoverboards or flying cars now or something (in 1989 I imagined they would be by 2020). Mostly I would come just to hear the accent.

Next up, we turn north up to Blackpool, before taking in some Lancashire countryside and crossing the Pennines into Yorkshire. We’re right up north now.