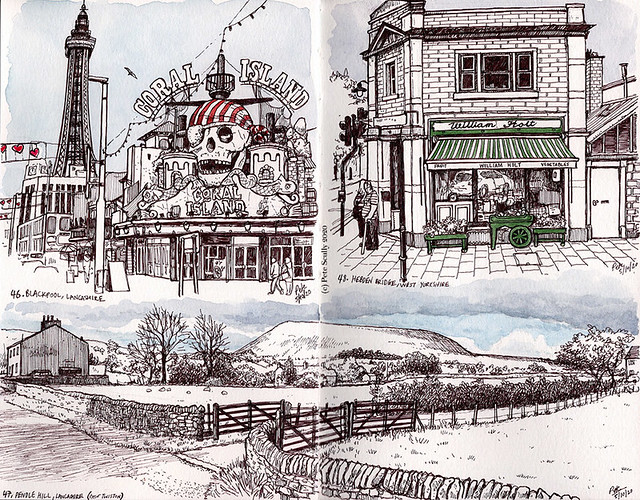 As I go further north, I move into geographies I’ve not really thought about in years, to the point that I look at the map and am surprised that places are where they are. The Yorkshire Dales are way further west than I realized, I’m not sure where I thought they were, under the North York Moors I guess, but not the case. I didn’t draw anything there. Also, the Forest of Bowland is a pretty huge area, just to the southwest of the Dales, and I haven’t ever thought about that place before. It’s an Area of Natural Beauty. I want to hike around it now. I have been to the Lake District when I was 17, and I decided to miss that area out on this trip, but that was a gorgeous place. But since that’s not where I went on this spread, let’s get on with it.

First up is Blackpool, on the Lancashire coast. I have been there when I was about 11 or 12; it’s a popular seaside town, the archetypal British seaside town, even more than places like Brighton or Bournemouth. Oh by the way all seaside towns in England begin with B. Because they are next to the C. Anyway folks I’m here all week. I could never have been a seaside pier comedian. That’s what you get in English seaside towns: a pier, and comedians who have shows there. Not necessarily funny ones, it’s often your Davidsons or your Browns or your Littles and Larges, but sometimes there are good ones. Are there though? Maybe it’s just something you have to have, like donkeys on the beach (do they eat sand?), sticks of rock, buckets and spades, and rain. Blackpool though is a proper seaside resort with huge amusement parks, big rattling rollercoasters, candy floss, and all that stuff that I liked when I was a kid. This sketch shows some of that, with the huge Blackpool Tower in the background, Britain’s answer to the Eiffel Tower. A lot of people like Blackpool, and fair play, it’s not somewhere that appeals a lot to me. I remember the beach being massive though, the sea was so far out I could barely see it. I did enjoy my holidays at Southport, further down the coast, which were at the Pontins holiday camp. So many fun memories there. We wold go there for the Irish music Festival, watching classic performers like Philomena Begley and Brendan Shine (“Catch me if you can, me name is Dan, sure I’m your man,”). I was a kid so I just played at the playgrounds and met kids from all over Britain, all with Irish families like me. It was so easy to meet friends when you’re a kid, “I like this slide, oh you like this slide too, hey we’re best buds now!” I remember getting slices of pizza, playing in the arcade while my mum and my big sister were at the clubhouse watching Brendan Shine singing about washing con-shine’s old lobby down. I made friends with this kid from Glasgow on this one trip and we were inseparable, and even wrote to each other afterwards, and then I think I saw him again on a later trip there but we were a couple of years older so it was like, yeah different people now I guess. I remember on this other trip when I was about thirteen and meeting this girl from Brighton or somewhere who had a double-barrelled first name, I can’t even remember what her name was now but my big sister just referred to her as Mary-Ellen and then subsequently as “Hairy Melon”. The things you remember! But that place, Pontins in Southport, was the first place I met so many people from all over the country – I had never experienced that before, and wouldn’t really again until I went to Cumbria when I was seventeen, and then when I went to university. You need to meet people from all over to learn more about the world.

So that’s the Lancashire coast. I didn’t know where to head next, but I had to go in the direction of Yorkshire. Blackburn? Nah. Burnley? Bolton? Is there anywhere that doesn’t begin with a B? I started reading through Richard Bell’s Britain for inspiration. I came across a golden orange drawing at a place called Pendle Hill. While up to now I have been drawing towns and cities and villages – buildings basically – I decided that now I should draw some countryside. Pendle Hill is quite dramatic, and I did a virtual walk all around it. I decided to stick with the colouring style, just doing the sky, though I wish I had coloured the whole thing. I did that in another countryside sketch later on and I’m glad I did. Pendle is known for witches, because of a famous witch trial in 1612. Pendle Hill also translates as “Hill Hill Hill”, with “Pen” meaning Hill (well, “head”, but that’s a type of hill) in the old Cumbric language, “-dle” coming from the Old English “hyll” (Pendle was recorded as “Penhul” in the Middle Ages), and the in more modern times they added the word “Hill” to the end. Probably in a thousand or so years if a different variety of language is spoken there they might add another word meaning hill, and keep going forever. There are several place names like this in England, I know someone who lived in a place in Devon called Combe Valley (“Valley Valley”) and there’s the River Avon (“River River”) and in America you have “New York New York” (which just means “New York New York”, but give them a few centuries).

Speaking of York, now we are heading from the county of Lancashire to the county of Yorkshire, two historic rival counties either side of the Pennines. You might think of the Wars of the Roses, when the royal Houses of Lancaster and York were big rivals, but you can’t think of that as a Lancashire/Yorkshire thing, more of a national power-hungry aristocrats thing. Nevertheless there is an inter-county sporting rivalry, called the “Roses” rivalry (after the chocolates; other counties have the Quality Street rivalry, the Celebrations rivalry, and the Milk Tray rivalry, but I haven’t decided yet which counties have those rivalries). So you get the “Rugby League Wars of the Roses”, the “Roses Match” in the county cricket championships, and Leeds United v Manchester United, though I think of that as the Eric Cantona derby. So I crossed into West Yorkshire and decided to stop in the pretty looking town of Hebden Bridge. The buildings here as in many northern towns all seem to be made from the same sort of stone, clinging to the sides of a steep narrow valley. Hebden Bridge has suffered several terrible floods in the past decade, one of the worst being Boxing Day 2015, turning streets into mucky brown rivers. Floods have come back since and the whole Calder Valley is threatened by flooding. The town is apparently known for its many independent shops; I chose to draw this little fruit and veg shop that seemed so old fashioned.

I will be moving through Yorkshire over the next couple of spreads; it’s a big place. So join me next time as we get to the triangle of Leeds, Harrogate and York…