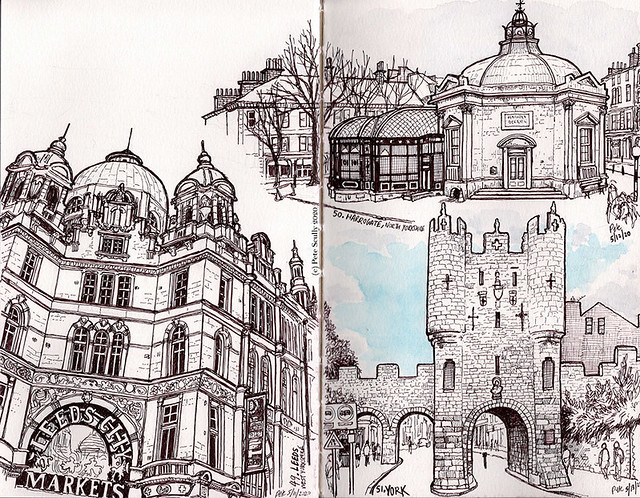 Yorkshire is a big place. It’s so big that it’s divided into several counties – North, West, South, and East kinda sorta. What is now officially the county of “East Riding of Yorkshire” was mostly called Humberside when I was growing up, and I didn’t realize until I looked at a map recently (just now) that it had officially changed into “East Riding of Yorkshire”. Not “East Yorkshire” though I guess some people call it that. But I’m not going into the East Riding on this trip. Today we are in the West Riding, tomorrow the North Riding. Riding? Yorkshire was historically divided into three “Ridings” – Old English via Old Norse “þriðing”, literally “three-thing”; think “farthing” – North, East and West (but not South). It’s not related to Red Riding Hood, though I can see why you thought that (by the way, why is the story called that? Red Walking Hood more like, amirite?)

First up is the biggest city of Yorkshire, Leeds. I decided not to go to Bradford, a city I have visited before which I must say I like the look of architecturally, well worth a sketch trip. Leeds is somewhere I have only ever changed trains, but it’s a big place and I enjoyed wandering about virtually. I know quite a few sketchers up this way, it would be nice to go and sketch the area. I like the Yorkshire accent. I chose to draw the Leeds City Markets building, and the angle I chose was unusual but I really like how it turned out on the page. I added no colour, letting the white space above it do the talking. Now the Ridings in Yorkshire are – were – divided into ‘Wapentakes’, and this was in the wapentake of ‘Skyrack’, a name that probably comes from the Old English words “scir-ac”, or “shire oak”. Wapentake, what a funny word. It seems to come from a meeting place where votes were taken by the brandishing of weapons – wapen – and this comes from the time of the Danelaw, when the Vikings ruled. Yorkshire is very much the heart of Danish England. Its boundaries were set by the Vikings and the Danish kingdom of Jorvik – York. We’ll get to York soon. Leeds though was a medieval market town, with a name that goes back to the ancient British, possibly from “Ladenses”. The Venerable Bede referred to the places as “Loidis”. When I think of Leeds though, I think of Leeds United, the football team. They just got promoted back into the Premier League after absolutely ages.

Just north of Leeds is the historic spa town of Harrogate. I’ve heard Harrogate is quite nice, but it just sounds nice by its name. In fact it has been voted the “happiest place to live in Britain” three times. That reminds me of that book, Mr Happy. Didn’t he go to a place that was the most miserable place to live, where there was a law forbidding people from being happy? This must be the opposite, I presume. Actually it wasn’t Mr Happy, it was Little Miss Sunshine. I used to be an expert on the Mr Men and the Little Miss books. At my school, people would ask me to draw Mr Men for them. My class even did a Mr Men themed school assembly performance and I got to draw massive Mr Men characters and we coloured them all in and held them up as flat ‘costumes’ in front of ourselves, I think I was Mr Rush but I don’t remember. The Mr Men may have even been what inspired me to start drawing, because all I wanted to do was draw Mr Men – they are not difficult, and I loved their shoes, the ones who wore shoes anyway. I loved the TV show too, Arthur Lowe’s authoritative story telling style, that theme music which I will always consider to be my theme music. When my son was younger I would read him Mr Men stories at night, but I would do them in all sorts of voices. I would read them in the style of Simon Schama narrating A History of Britain. I would read Mr Chatterbox like Vicky Pollard. Fun times, those. Anyway, Harrogate. My only connection to the place is I knew a bloke at school, Andrew, who came from Harrogate to live in London. He had a Yorkshire accent but it was not very strong, we expected it to be all “ee bah gum, t’ferret in t’field” but it wasn’t anything like that. I also used to have this ancient metal toffee tin that came from Harrogate. I decided to draw this pump house, the Royal Pump Room, part of the spa baths there I suppose. Looks like a nice place to sketch, Harrogate, and then get afternoon tea.

And so on to the mos famous and historic city of Yorkshire, York. This was the Viking capital of Jorvik, but it was also the Roman city of Eboracum, capital of the province of Britannia Inferior. I have only been to York once, as a kid on a school day trip from London. Even then I was a bit obsessed with history so I found it amazing, but it did piss down. We visited the Jorvik centre to learn all about the Vikings, and I remember the authentic disgusting smell, though that might have been a sandwich in my school bag that had been there for a few weeks. We also visited York Minster, which I was gobsmacked by, though I couldn’t stop and draw cathedrals back then. I want to get back there to draw it. And I remember we went to the Shambles. I bought a poster about Dick Turpin which had pride of place on my wall for years. Dick Turpin was an infamous highwayman (who really hated people calling him Dick Turnip), who terrorized people on the road to York. Well, he robbed them, I wouldn’t call him a terrorist. He had a great tricorn hat so people would think he was a pirate – imagine their surprise when he turned out to be a highwayman! I don’t know if he ever said “Stand and Deliver, your money or your life” but historians are adamant that he did. He probably should have not put a comma after the word “Deliver” though. Turpin is famous in my home area of Edgware because he was said to have stayed in one of the inns there whenever he would pass through going up the Edgware Road (sometimes with his Essex Gang committing some horrible robbery), an inn that in the 80s was an Italian restaurant called the Vecchia Romagna, and my mum worked there sometimes as a waitress, so we all heard about Dick Turpin coming through like two and a half centuries before. Turpin was hanged in York in 1739, and passed into legend as a dashing robber on horseback with a pirate hat and an Adam and the Ants song on the radio. I used to have a book all about the Richard O’Sullivan tv series, and Dick Turpin was quite a good looking chap if that series is historically accurate. Or he might have looked like Dick James. Anyway, the sketch I did was of one of York’s historic gates, this one being Micklegate Bar. York also has lots of little alleys called “Snickelways”. I think there is also a gate called “Ticklegate” named after Mr Tickle, but I might have just obviously made that one up. It sounds like a scandal anyway. Finally, York always reminds me of Yorkie, one of my favourite chocolate bars, I love those. Especially the ones with the bits of biscuit in them.

So that was York, next up we will go to the North Riding and up to the coastal town of Scarborough, followed by Whitby and then north up to Durham. We are nearly done with England now, and then Scotland, and then I can start a virtual tour around France or Europe or America or something. Not gonna be getting anywhere real any time soon, after all.