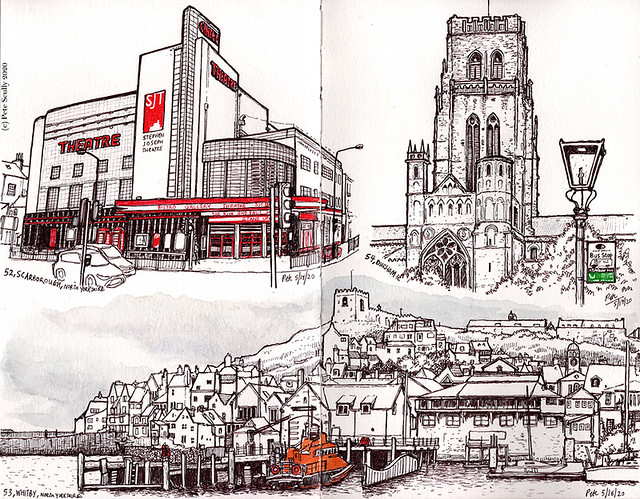 Right, let’s go into the North Riding, and along the North Sea coast. First up is Scarborough. I have been to Scarborough a number of times, on a long six hour bus journey from London (passing through York, Stamford Bridge, Driffield, Bridlignton, and Filey). Scarborough is a popular seaside town with a big old hotel, a castle, two beaches, a vibrant town centre, and great views from the cliffs (which famously eroded dropping another hotel into the sea years ago). I used to go out with someone who spent some time studying here over two decades ago, but I also considered coming to study drama here as well, having previously worked at Asda with someone who did the same. It’s a big town for drama, and lots of well known drama people have lived here. Sir Alan Ayckbourn, the great playwright, was the artistic director here at the Stephen Joseph Theatre for a long time. This theatre, named after its founder, was the first ‘theatre-in-the-round’ in England. I do like a theatre-in-the-round (though my favourite one was, er, White Hart Lane). Other entertainment people involved with Scarborough, well, Winner (ugh) made one film here and then there’s Saville (massive ugh), he lived here too, I remember seeing his house. This was back in the late 90s and people there would still say, yeah he’s a right creep. They weren’t wrong. I do like Scarborough though, and I wish I had been sketching loads back then, because it’s a classic sketchable coastal town, but I wasn’t. I recall during the daytime when I’d be by myself walking about the coastline and learning lines for whatever play I was doing at university at the time (usually something in German), and listening to David Devant. The wind coming in off the coast can really drive through you though, so it’s nice to reach the chip shop and get some delicious chips in gravy. Scarborough was the subject of a song called “Scarborough Fair”, which goes something like “Are you going to Scarborough Fair, they have the Big Wheel and the Twister and the Waltzers there, You can get candy floss stuck in your hair, And with an air gun you can win a teddy bear.” It’s an old folk song. Anne Brontë is buried in Scarborough. The Brontës were from Yorkshire and wrote books, though I have not read them. I think they are about dinosaurs but they might not be. One of them has a character called “Heathcliff” which let’s face it is what happens when you can’t think of a name and you just look around, there’s the heath, oh there’s a cliff, that’ll do. Other characters are Doorwall, Tablechair and Fieldpond. I haven’t read the books so I might not be completely accurate there.

As you go up the coast there is a nice little town called Robin Hood’s Bay, though I didn’t draw it on this virtual trip. I remember eating some delicious scampi there. Robin Hood may well have come here for scampi too, but the story goes that he beat up a bunch of French pirates here. I wonder how French pirates pronounced the Pirate word “Arrrr”? “Yeau-eau-eau, chevre mes timbres!” Ok that’s enough. On this trip I was headed straight for the town of Whitby, lots of peoples’ favourite spot on the northern coast. When I think of Whitby I think of the Synod of Whitby, where they determined the date of Easter many centuries ago. Nah, I think of Dracula. In Bram Stoker’s book Dracula, in which an ancient supernatural from Transylvania being spends a great deal of time trying to broker a property deal in London while turning into great wolf-like beast, a bat, and for some reason some mist. I mean, you do what you can to get the deal you want, who among us has not turned into mist when trying to get a bank loan. Anyway the vampire gets on a Russian ship with loads of boxes of mud and lands in Whitby, getting into all sorts of shenanigans up at the ruins of the Abbey, on top of that big cliff. Strange thing about vampires, not being allowed to cross running water and not being able to come inside without an invitation. Whitby has a beautiful harbour, I can imagine being here on a cold October evening as the rain is blowing in, heading into a warm pub, eating some delicious fish and writing ghost stories in a journal. With everybody else there doing the same. The town is probably full of goths looking for vampire stories, which is fine too. In fact when I was at school I actually wrote and performed an eight-song musical for the drama part of my expressive arts class called “Dracula AD 1992”. That one took place in Essex at the ‘Alucard Motel’. Anyway, I enjoyed drawing Whitby and look forward to some day going and drawing the real thing. I’ll bring a cape, and maybe an umbrella and a wooden stake.

I remember a joke someone told me when I was a kid. Where does the Pink Panther live? Durham, Durham, Durham Durham Durham Durham Durhaaaam… I think you have to do the Pink Panther music in your head to get it, and to know where Durham is (or that it exists) which when I was a kid, I didn’t. In fact I thought it was in Ireland, because people say “County Durham”, and you only say that for counties in Ireland, like County Wicklow or County Clare, you don’t say for example “County Suffolk” or “County Leicestershire”.  Anyway I never thought the joke was funny (it’s certainly no dead parrot polygon joke), and it’s filed away with the one about Batman being told it’s dinner time. So, time to visit Durham. Durham has one of the most dramatic cathedrals in the country, high up on a hill overlooking the river Wear that curves like a race-track around the historic town centre. I’ve wanted to go and draw that ever since I studied Anglo-Saxon literature and we did the poem about Durham. This actual cathedral building came later than that poem but the words were still very illustrative. This was St Cuthbert’s city. We are very much in old Northumbria now, far away from the southern kingdoms of Wessex and Kent. Northumbria was an important kingdom in the Anglo-Saxon times, with centres of great learning and scholarly activities, most notably at Lindisfarne with our man Bede. Despite sounding like one of the “softies” from the Beano, Cuthbert was one of the most important monastic figures in northern Britain in the Early Middle Ages and is considered the patron saint of Northumbria. A couple of centuries after his death, his relics were brought from his original burial site at Lindisfarne where he was Bishop to find a new spot (there was a cow involved apparently) on a perch overlooking the Wear, and that’s where Durham and its cathedral were founded. The cathedral building that is there now dates back to the end of the 11th century and the time of William the Conqueror, who we have met a couple of times on this story already (beating Harry at Hastings and chasing Hereward the Woke out of Ely). William was a bastard (he was called William the Bastard before the Conqueror URL became available) and especially in the north, where he undertook the Harrying of the North, though we should have called it the Williaming of the North since Harry had been beaten in 1066; bloody leaders blaming and naming their own actions on their predecessors, good job we don’t have leaders like that now eh. But the legacy of cathedrals like this is quite a tick on the plus side, because it is really gorgeous. I would love to do a cathedral tour of England, fill an entire sketchbook, bigger size, with cathedral drawings.

Next up, we are reaching the top of England, and heading into the other great cities of the North-East: Newcastle and Sunderland. I’m starting to get dizzy.