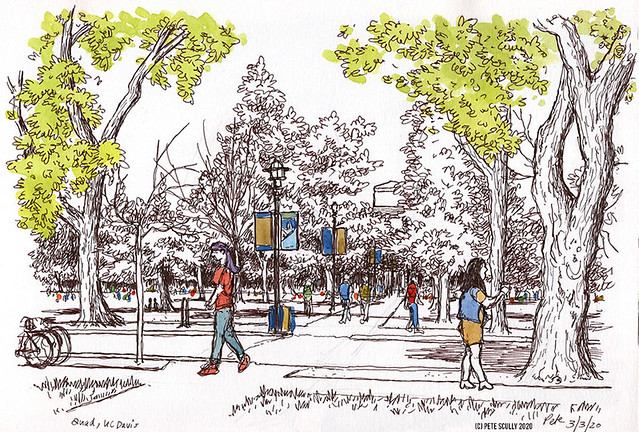 We’ll all remember March 2020. For one thing it was the longest month on record. Sure, it was 31 days, but it felt longer, much longer. I’ve already posted my at-home sketches, a story unto itself, during the whole Shelter-in-Place period which is now over except that it is probably starting again any day now. We’re still working from home anyhow, so life carries on just the same, but with even more masks. Speaking of which, you can now purchase face masks with my sketches on at : https://society6.com/petescully/masks. There are plenty in there, Davis sketches, other country sketches, loads of sketches. Ok, so on with the story. I did do a bit of outside urban sketching before we were all ordered to march back home, so here are them. At the top is a sketch of the UC Davis Quad, with slightly out of proportion people, which is fine but next time I’ll get it right. Although in my defense purple hair lady with red top was very tall. It was a Springtime day, and while news was starting to get ominous about the virus, we were still here living in a “well maybe it won’t be so bad” bubble while looking at Italy and wondering what on earth was going on there. We started wiping things down religiously in our departments, and started looking for the facemasks left over from when we had the fires, and our instructors were ahead of the game with starting an option for remote instruction, while everyone washed hands while singing happy birthday and stockpiled all the bogroll. I didn’t really expect what was coming though, which turned out to be no shortage of bogroll at all. 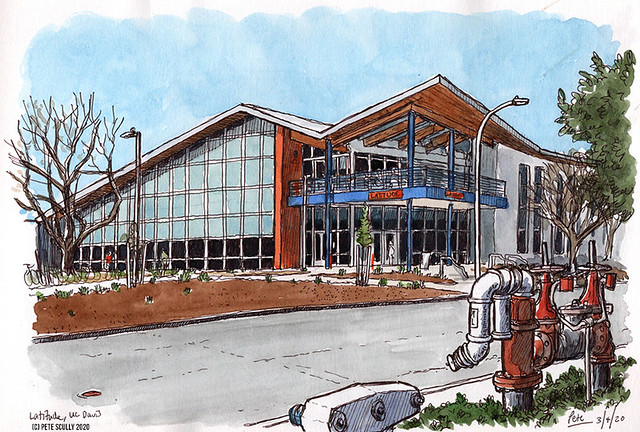 This building is one of the newest on campus, called “Latitude”. It looks like it could be a graph showing a rise in, I don’t know, cases of something, followed by a dip, and then a second wave, but that is just using architecture to make a point that doesn’t really match up with the current situation. Still it is an interesting looking design. If we in Stats ever got given a new building something that looked like this would be nice and visually representative of a graph. Chemistry too should get a building that looks like lots of test tubes, English should get a building designed to look like a big book-case, and Animal Science should be housed in a gigantic statue of a cow. This is why I don’t design university buildings, I just draw them. Although the Backflow Preventer in the foreground reminds me of a mechanical horse, or maybe a robotic camel. 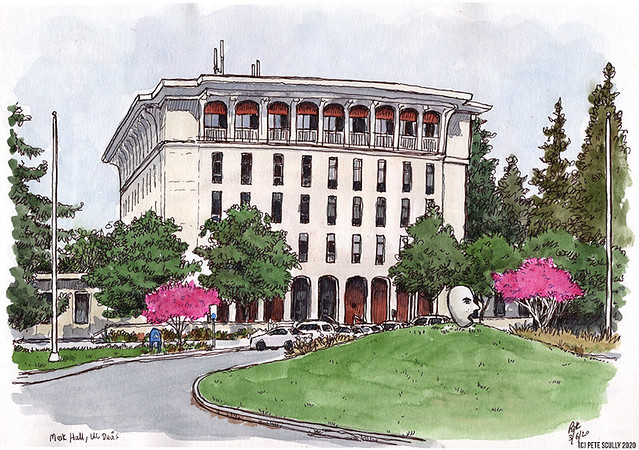 This is Mrak Hall, where the university administration does its administering. I’ve spent a lot of time in its 1950s marbled halls, even going once up to the top floor where the boss works, Chancellor Gary May (a fellow Lego and X-Men fan who I have sketched before), when I was escorting a prominent guest from the UK to meet him. I have drawn Mrak a whole load of times, and I like it from this angle with the pink springtime blossoms on two of the trees and one of a pair of Eggheads visible in the foreground. Mrak Hall is named after Emil Mrak, the first chancellor when Davis became its own UC back in the 50s. This was March 6, and things were starting to look ominous, but we still moved as though the world would still be turning, preparing for visitors from across the country, though at this time we did have one visitor withdraw from a visit from Europe out of concerns, wisely as it would turn out. We still planned our big soccer tournament for May, the Davis World Cup, though with a doctor on our committee voicing concerns about the upcoming pandemic we did start wondering if perhaps we should postpone before we put in all the major work – wisely, as it would turn out. 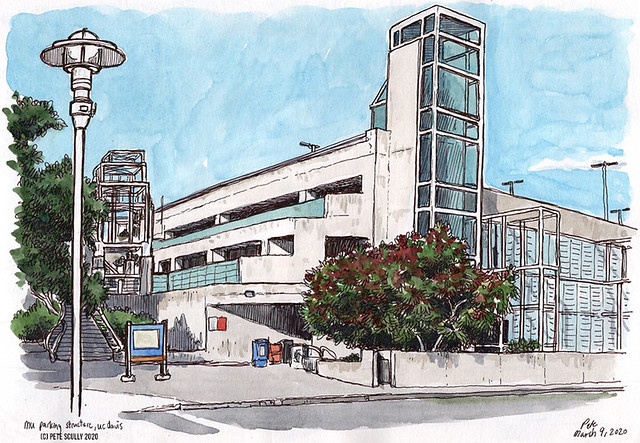 This is the parking structure at the MU, where my wife would park her car back when we all went to campus every day. By this date, March 9, alarm bells were ringing. Not literally, just figuratively. On campus we started having ad hoc committee meetings to switch to remote instruction if that became a thing. However, everything was still normal until told otherwise, classes, sketchcrawls, soccer practices and games. AYSO encouraged us to be aware of the threat of coronavirus and that players who were sick should stay home, we should not shake hands with fellow coaches, players should not share water bottles, but games would still go ahead. We were planning for our upcoming vacations (we were looking forward to visiting Utah for the first time in April, and still thinking about a trip to Italy which in another year we would have already had booked and planned and paid for by this point but in 2020 we held off and delayed for some reason, wisely as it would turn out). I was looking forward to another 5k race in Davis, the ‘Lucky Run’ having done the Davis stampede in February, and was planning on having a series of races throughout the year. I’m really into running now. In fact since the shelter-in-place I have been regularly running 2 to 3 mile runs, which is much more than I used to be able to do. 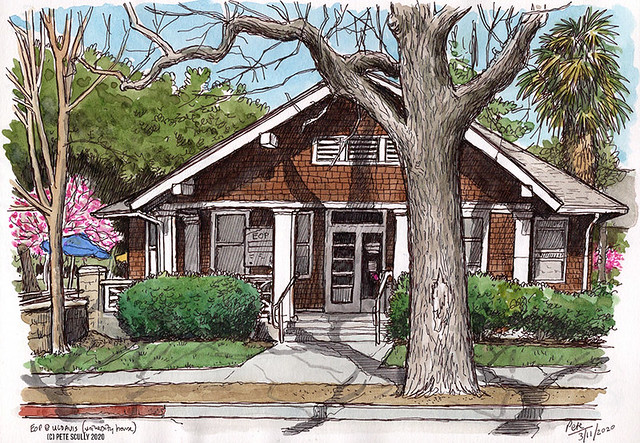 I remember this sketch being the moment when things started getting real. Before sketching I was emailing back and forth with the opposition coach planning for the weekend’s game in Mt Diablo, and then while sketching I had parents asking if the game would go ahead, followed by an announcement that no, the season was being postponed, for now. No games, no practices, no meetings, until further notice. I’ll always think of that with this picture. On campus, we were starting to encourage staff to work remotely if possible, as other counties started a lockdown of sorts, a ‘shelter-in-place’, a phrase I only knew from whenever there was a different type of emergency, that is a gun-themed one. Now the sketch, I have drawn it before, but it’s one of the oldest buildings on campus, University House, and I like it when there is pink blossom on the tree. Schools however were still open, just under thorough disinfection, but I think everyone knew they would be closing any moment now. Any moment now. Here it comes, schools are going to close… 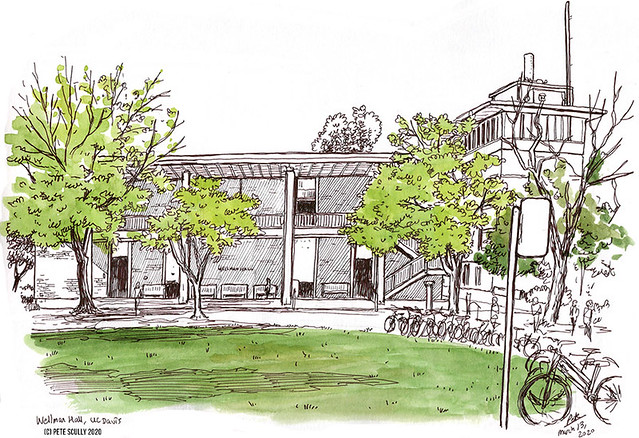 And it had to be Friday 13th, didn’t it. I walked into campus that morning and it felt odd, unusual, and calm. Well we got the message after lunch that schools would close until mid-April. On campus, people were nervous about being there, about getting on the bus, about meeting with anybody in person. The Trump administration announced travel bans from Europe (not including the UK at first, and then deciding oh yeah, them too). And we staff decided that we would work remotely if possible, though we did not get the official order to do so until the next week, once the state had announced the Shelter-in-Place order. And this is when we start drawing from home. It feels like remembering history now rather than just a few months ago, but This Whole Thing isn’t going away any time soon and keeps developing here and around the world, not always with the best leadership at national levels, though I think our campus leadership has done well under the difficult circumstances. And here we are in the middle of July. Things are rubbish, they really are, and I don’t want things to be so rubbish, but they are. And this sketch is of Wellman Hall, ironically named in a pandemic situation. This was my last outside sketch until June, and even now I’m not doing much of it.

2 thoughts on “before we all went marching home”