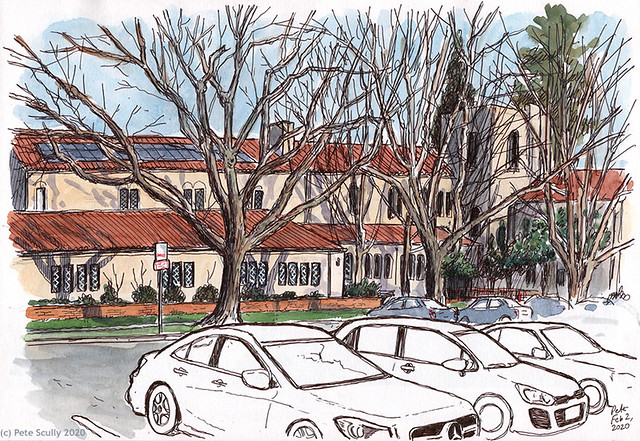 Ok, since I’m posting month by month to play catch-up, here are a bunch more sketches all from February, from Davis (downtown and campus this time). I’m still not going out and sketching at the moment, even though I can, I’m just not for some reason. This week I have been drawing Northern Line tube stations with a limited palette of three colours, one of which I can’t pronounce, one I can’t remember, and the other one I just like having fun with the name. You’ve got to have fun with language in a pandemic, although in my case it’s more like a pun-demic. I have to wear a mask indoors so nobody can hear the dad jokes.
Right, back to the drawings. Above is Davis Community Church. I like drawing this building, especially when the trees are a bit leafless. I drew this building first back in 2006, and I remember not being super happy with the outcome but thinking, you know one day I’ll think this will look good. I never did, to be honest, but I’ve drawn it a few times more when I have been much happier with it, and I really like this one. I drew it again, below, uncoloured and from the front, more quickly over a lunchtime, but I was not super bothered with that one so just left it. 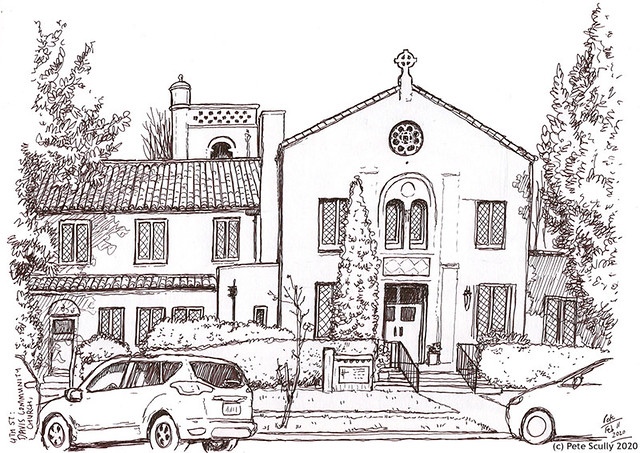 I do like drawing churches though. I’m probably one of the most unreligious of people I know, but I love a good church building, in fact most interesting looking religious buildings. I’m kind of specifically obsessed with cathedrals, and want to do a sketchbook tour (a real one, not a virtual one) drawing loads of them, inside and outside, and I don’t know that I’d ever get bored of them. I remember the very first time I went to Notre Dame, in Paris, and feeling the ancient cold stone, looking up in wonder at the massive rose window, sensing the years of stories. I mean I don’t get that feeling obviously from the Davis Community Church building but it’s interesting in its own way, and I like to stop and draw it every now and then. 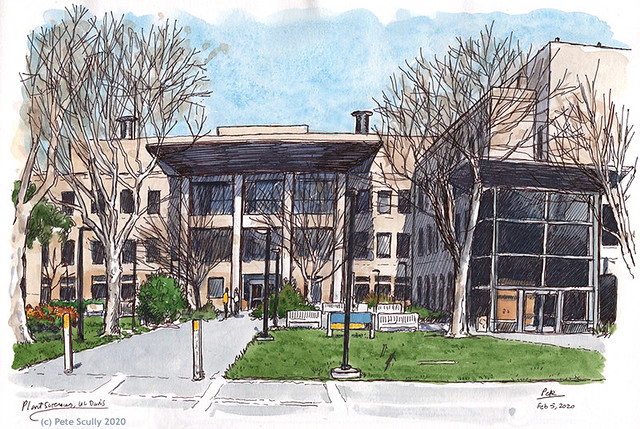 Let’s take a stroll back over to campus. This is the Plant Sciences Building at UC Davis. They are really good at what they do there, and what they do is plants. Specifically, the science of plants, or Plant Sciences. Ok I am not a plants person, I don’t know my onions. I studied medieval English, and before that Drama and French. We have established in the previous post that I love science, but only in a kind of “cousin you only see every now and then” kind of way, I don’t remember science’s birthday until I see people on facebook saying happy birthday to it. Biology was not my interest, despite me getting ok grades in it (for my class anyway). I do remember one homework set by my biology teacher in which we had to describe to aliens who had just landed on earth what the difference was between an animal and a car, why one was alive and the other was a machine. My answer was short. “It’s a bit like your spaceship.” I said. My teacher didn’t give me a good grade for that. But the thing is, this was clearly a vastly more advanced civilization, being able to get across space like that when we couldn’t even get the high-speed rail link to the channel tunnel right at this point. If anything they could tell us what the difference is, and a whole lot more. I don’t know, I’d be a bit suspicious of these space aliens asking suspicious questions, I don’t think I’d want to tell them all that much. This homework was from like, 1990, and I’m still thinking about elaborating on my obviously wrong answer. I think that’s where my science career ended, and also my sci-fi writing career. 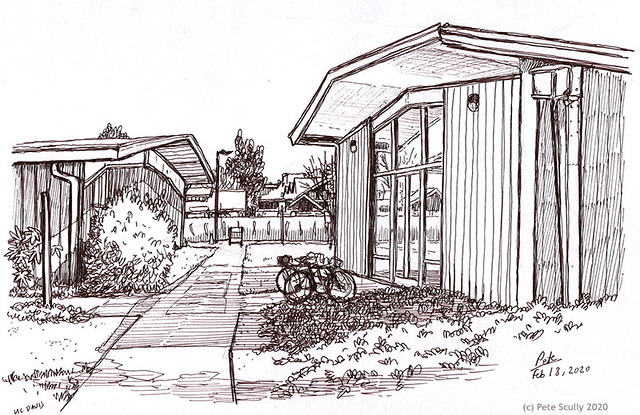 And then there’s these buildings. I don’t know what they do, but there is some construction going on opposite. One of the things that happened to me in February, I went to the emergency room on my birthday, as I had picked up some sort of infection in my nose, which looked terrible and was very painful, but thankfully got better with lots of medicine. I keep forgetting about that now with all the global pandemic we’ve had since, but that was my first trip to the doctors in a decade so it felt like a big deal, and made for an exciting birthday. 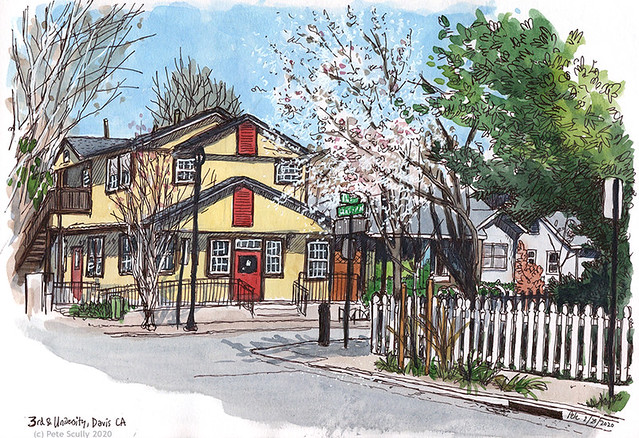 This one, on the corner of 3rd and University, might be my favourite sketch of this whole period. Very springlike. I was getting over that whole nasal infection thing, and I had a spring in my step (people kept bouncing into my door) (sorry, dad joke alert). This is another corner I have returned to many times over the years. It used to have a telegraph pole with shoes hung over the lines. Now (out of shot) there is an obelisk made of bike arts. 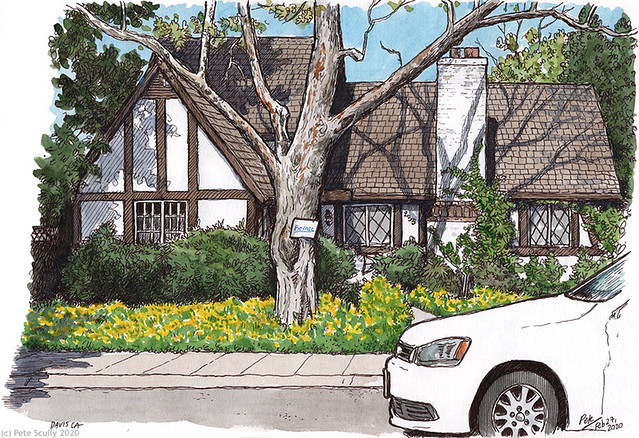 And finally here is another spring-like sketch, this is a house near campus I have always thought was one of the prettiest in town. I only drew a bit of this one on site though because I was in a hurry, so I did all the colour and half the drawing later on. There was a “Bernie” sign on the tree, presumably for Sanders, I don’t think it was for Bernie Winters. Remember Bernie Winters? He had that massive dog, a St.Bernie-Winters I think it was, I think it was called Orbitz. Anyway this is a beautiful little house, there are some lovely little houses in this town, and as I’ve been exploring more on my walks and my runs in Davis I’m seeing just how many lovely houses there are.
February was a long time ago. Today is Born on the Fourth of July here in the US, and so Happy Independence Day to everyone. We are watching Hamilton tonight! And tomorrow morning, I’m also watching Lewis Hamilton, because my beloved Formula 1 is back…