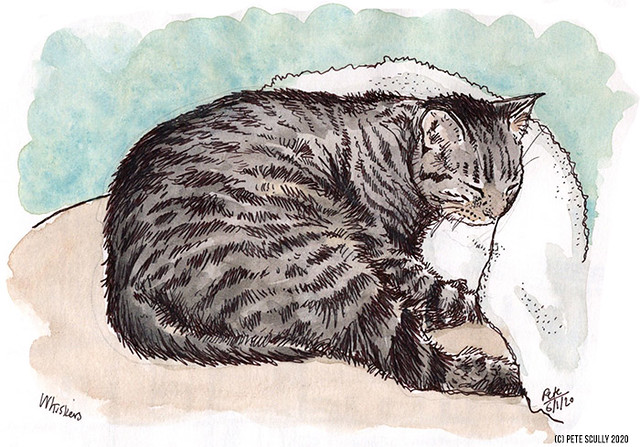 These are our stay-at-home cats. Stay-at-home orders are nothing new to these two. They probably like having us around more, or they don’t, it’s hard to say. Whiskers and Sawyer. two brothers. However with all of the disruption that happened in our downstairs when we had that flood, what with moving out the furniture and everyone staying upstairs, the noise from all the air dryers and the work, it took a toll on the kitties, and one of them, Sawyer, got very ill with the stress and ended up twice having overnight stays in the animal hospital, poor thing. Not the TV show, but the place. He had to be nursed back to strength, amid all the confusion with the living room, and on top of that his brother started acting as if he didn’t know him. As soon as he came back from the vets Whiskers was hissing and growling at him, Sawyer didn’t know what it was all about, but Whiskers couldn’t get over all the new smells on him, to the point where we had to keep them separated while we worked from home, and it took weeks for them to be ok around each other again. We learned a lot about cat behaviour during this time! Thankfully they are friends again now, but it really took a while. 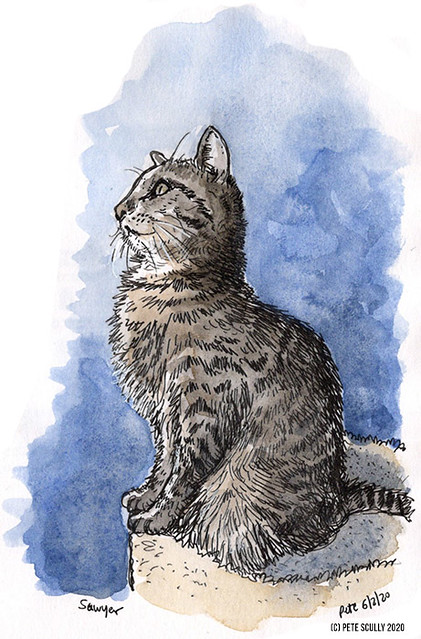 Animal Hospital, remember that show? I remember the sweet music and the little puppies being nursed to health, I remember also that it was presented by a kindly sweet old man in glasses, my memory isn’t great so I need to google that one, can you guess who it is yet, oh it was – never mind, never mind! I forgot he presented it. Wow, even Animal Hospital memories tarnished. Those guys were creeps, the Rolfs and the Jim’lls and the weather man bloke on the floating map in Liverpool, and all the rest of them. There was another show I remember though, Pet Rescue, I think it was presented by the former Chelsea and Romania player Dan Petrescu, but I may be confusing that one. Before this turns into another “remember this old TV show” post (and I do want to do another one of those), let’s get back to the drawings. I don’t draw animals often, but I really wanted to draw the cats again, after all they’ve been through. They are finally friends again now, maybe not as close as before, but not hissing and fighting as much, they are even back to cleaning each other, and occasionally alternating each other’s napping spaces. Now that the living room is normal they seem a lot more content. Cats are funny. 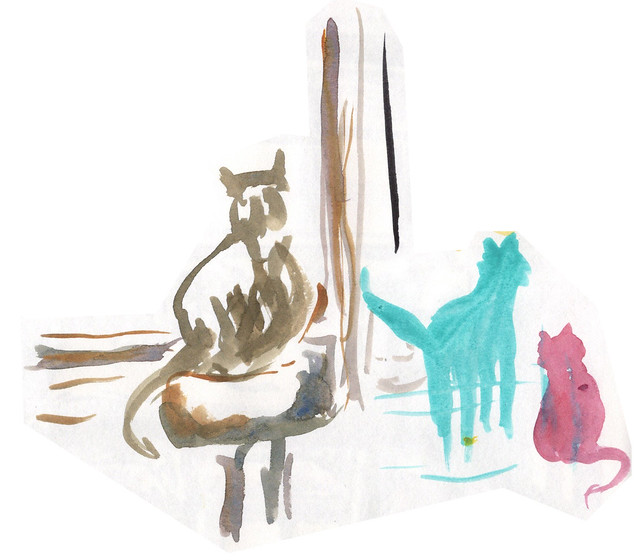 While I was messing around testing some new paints recently I did try a couple of quick gesture sketches of them looking out of the window. Always fun. They like to look out of that window at the other cats outside, the outdoor cats from down the block, and the birds in the trees. We get a lot of hummingbirds here, they like to come and hover about looking right into our window.

One thought on “the stay-at-home cats”