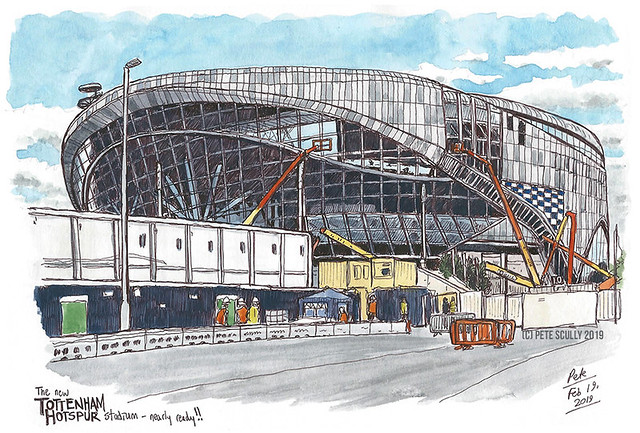 And here it is, the brand new Tottenham Hotspur Stadium! The new home of my beloved team. I have wanted to come and sketch the construction for ages, but never made it here until a couple of weeks ago – fortunately, construction has taken many months longer than the original optimistic plan, so I was able to get one sort-of in-progress sketch. The stadium is huge. It’s so different walking out onto Tottenham High Road and seeing it loom out, much larger than the old White Hart Lane ground. I wandered about taking photos, before settling on a spot to sketch on Park Lane by Northumberland Avenue. Lots of workmen in their hi-viz jackets, cranes still putting the panels onto the side. And then it was time to go into the new Spurs Shop, much vaster than the old one, and they’re even better at getting me to spend my money. One of the many things I did buy was the new book, The Spurs Shirt, an amazing (and very heavy) book covering the history of the Tottenham shirt. Very much up my Lane. When I was finally done, my backpack much heavier than before, I went off to my friend’s place in south Tottenham, for a fun night out in Stoke Newington.

After Tottenham’s historic home White Hart Lane was knocked down, the massive new modern stadium (with a retractable pitch, so that some NFL games can be held there) was built with an expected opening date of the start of the 2018-19 season. Maybe a few games in. Alright it’ll be September. Ok maybe not September, maybe a bit later. January? Hmm not January, let’s just say “coming soon”. In the meantime we have been playing at Wembley, waiting to move into the new home, couch-surfing in north-west London. Today, Spurs finally announced two test events, ahead of expected Premier League games at the new ground, with the expectation that our Champions League quarter-final will be, finally back home in Tottenham. Come on you Spurs!

2 thoughts on “When the Spurs go Marching Home”