After the rainclouds of Antwerp drifted away to wherever they go, I was back in Brussels for the evening. I ate a ‘Quick’ (a fast food they have in Belgium and France that I used to quite like, but tastes awful now) at the hotel, and then headed back over to the Grand Place before it got too dark. there wasn’t time to draw the whole thing yet again, but I wanted to capture that evening sky above the rooftops. Also that big crane. It was nice. I stood on some steps outside the massive Maison des Ducs de Brabant, others were taking selfies. There was a young tourist sat on the cobbles below me, I could see he was trying to open a bottle of Belgian beer he’d just bought, trying in vain. I went and asked a nearby cafe for a bottle opener, they kindly lent me one and I helped the tourist get his bottle open, he looked happy; good dead of the day done. We’ve all been there, when travelling! I remember trying to open a bottle of Fanta on a really hot day in a small town in Denmark with no bottle opener, I was trying to pry it open on metal street signs to no avail. After another long day of sketching I also needed to relax with a nice beer in another centuries-old tavern, so I went back down the little alley where I’d found Au Bon Vieux Temps the night before, but this time went into the lively A L’Imaige Nostre Dame. 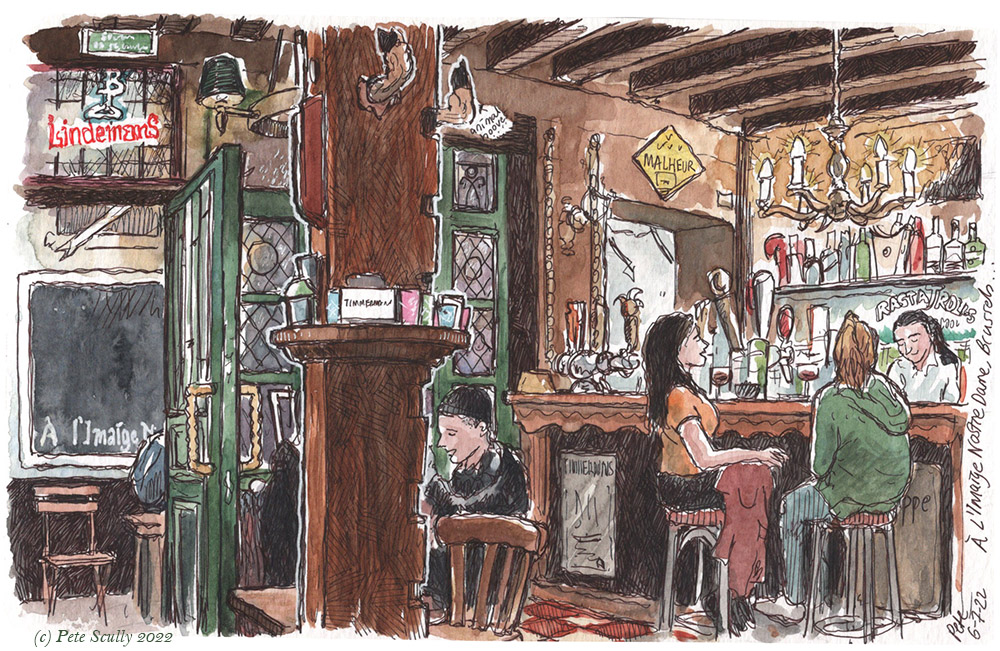 This old tavern is one of the oldest in Brussels, dating back several centuries, and pretty colourful. There was no way I wasn’t sketching this. I had to find a place to sit with a decent sketchable view, and my table was a little small, but I got a ‘Malheur’ beer (which was alright) and tried to catch the spirit of the place. There was word on the mirror behind the bar that read ‘RastaTrolls’, whatever that means, it reminded me of the kids show ‘RastaMouse’, which was very funny. I could hear there were Americans at the bar who clearly loved this place, from what they were telling the bar staff. Who wouldn’t? It was a friendly place to hang out. I’ve been to some older pubs in Brussels and sometimes they can feel a little sleepy (thinking of A La Becasse), when there are pretty popular places elsewhere (thinking of Celtica, opposite end of the spectrum). I would recommend it here. I drew really fast, and then walked back to the hotel, my last night in Brussels. Next day I was planning to go to Charleroi to draw factories, but it rained a lot, so instead I slept in a bit and went in the opposite direction to Leuven.