I woke up and it was raining hard. There was no way I was going to Charleroi to draw old factories if I was sitting on top of a hill getting drenched. I spent enough time getting drenched in Charleroi between 1999 and 2000 for a lifetime. So I had a little lie-in, and then hopped on a train to the nearby university city of Leuven (Louvain in French, but this is in the Flemish region). I have only been to Leuven once before, and that was an even rainier day, meeting up with one of my fellow year-abroad teachers. Always thought it would be a good place to go back to a less rainy day, but since it was raining anyway I thought, what the hell. This was my last day in Belgium, I was going to be catching a Eurostar that evening back to London. Originally I’d planned to stay another day, but as much as I like Belgium, an extra day in London is something I knew I’d love more (and I did). I dashed from shop doorway to shop doorway to stay relatively dry, until I reached the centre of town. I spent a bit of time in an interesting bookshop looking at Flemish books, including one very big volume all about the various dialects of Flanders, complete with detailed maps. If I could read Dutch better that would be a fascinating book. It’s hard for foreigners to sometimes pick up the subtleties of accent and dialect in a language where they struggle just to understand the words (I said that very thing to someone when I first came here in 1999, they asked if I was having difficulties with the accent, I said no it’s the vocabulary). I didn’t for example realize that the French of Charleroi was a particularly peculiar version compared to many other places in Belgium, such as my friends in Liege who told me they couldn’t always understand Les Carolos. Meanwhile they are struggling to understand my French, and then when I went to Charleroi, people told me “oh you have such good French!” so I understood, right, I learned it here, that’s why nobody else comprehends me. That’s my story anyway. So, I got to Leuven and had a waffle, and tried to figure out what sort of drawings I would do. I was faced with this big church – I’d go inside later – and the extremely ornate Stadhuis (Town Hall) building, which I knew I’d need to draw, but wasn’t sure where to start. I walked about, and found a covered passage by the Grote Markt where I wouldn’t get splashed on too much. I drew the panorama above. This took under a couple of hours, though I added most of the paint later. Click on the image, you will see it in more detail (on Flickr). It was a reasonably busy Wednesday lunchtime. As I drew, a girl crashed her bike not far from me, sliding on the watery street, and she seemed pretty hurt. I went over with some other bystanders and she was helped up into the dry, and her bike put to the side. I got back to my drawing, I couldn’t really help much more with my limited Dutch, but someone else was able to help her get her phone to call her mother who came to collect her. I felt really bad for her, I don’t think she’d broken anything but she was pretty upset. As much as I enjoyed this drawing I do think of that poor girl falling from her bike now when I look at it. 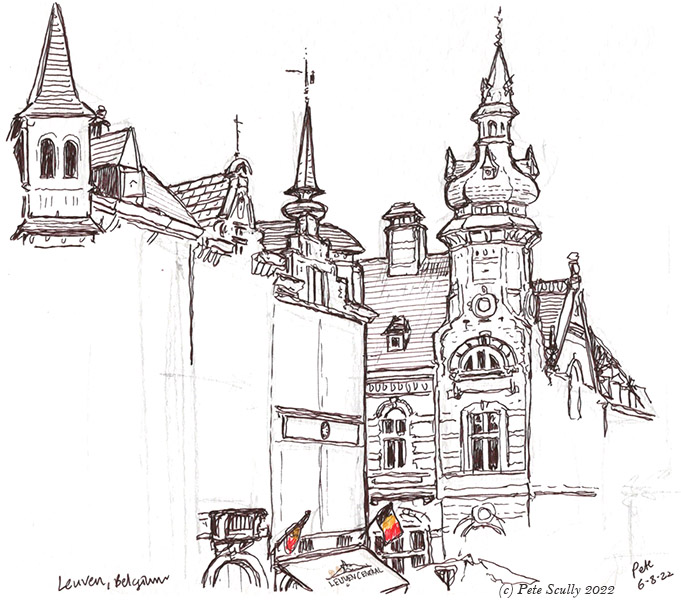 Leuven is an important old town, the historic capital of the Duchy of Brabant. Its university goes back to the 1425 (as the old University of Leuven, though that was abolished in 1797, and its successor KU Leuven was founded in 1834). The university’s library was atrociously burned to the ground by the invading Germans in World War I. The enormous St. Peter’s Church (Sint-Pieterskerk) is opposite the Stadhuis and dates from the 1500s, though it too was seriously damaged in both world wars. I stood at the rear of the church sheltered from the storm, and drew the sketch above. I liked the shape of those rooftops. The flags were above a bar called Leuven Centraal, where I would stop in for some food before heading back. there was a young couple seated nearby who were if not on a date, seemed like it was a kind of date, they were having that “I like this music, do you like that music” sort of conversation (from what I could gather of their Flemish; I may have misunderstood, they could have been talking about horse racing for all I know). So I went into the church, walked about, was a bit overwhelmed to do a proper big sketch int here, and drew this big wooden pulpit thing that looked like a magic tree. I bet the priest loves going in there, it’s like walking into a fantastical sculpture, like you become some sort of wizard on the other side. 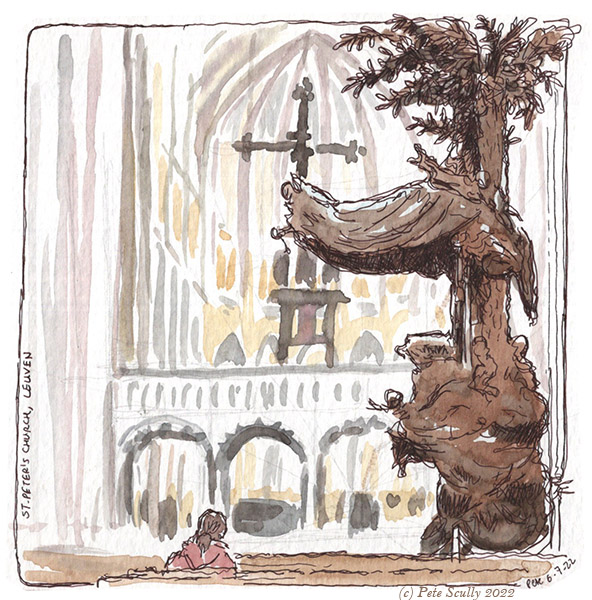 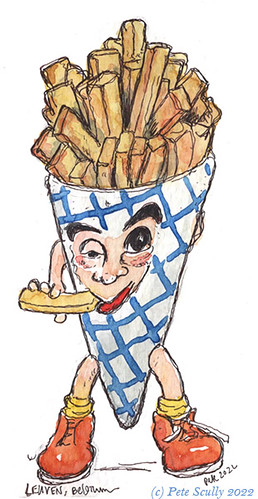 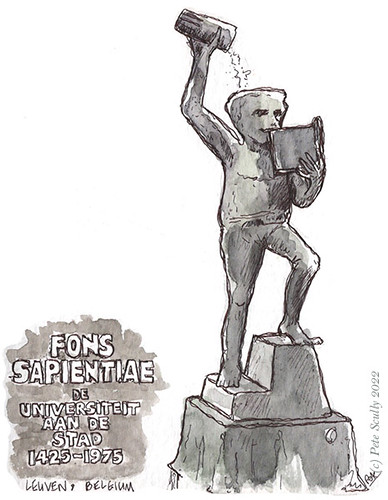 A couple of different things. The first was outside a friterie, and is an anthropomorphized bag of frites eating a frite. He only has one arm so maybe another bag of frites ate his arm. Maybe cannibalism is a thing in the live-action-frites community. Either way this was CREEPY as hell, but not the creepiest frites related image I’ve seen in Belgium (that would be the odd three-legged feminine-frite, a ‘frite-fatale’ if you will, seen in Charleroi next to an image of, for some reason, Dopey the Dwarf). Still it is a bizarre figure. Yet it still made me hungry for more salty frites. The next statue is a more well-known Leuven fixture, ‘Fonske‘, or ‘Fons Sapientiae’. I would presume this is Leuven’s version of the Fonz, is telling kids “eeeh, be smart, be cool, read books, stay in school” and then for some reason pouring a drink on his head, which Fonzie would never do, unless the drink was hair gel. I don’t know, I’ve not seen Happy Days for a long time. Fonske was created in 1975 to commemorate the university’s 550th anniversary, and the name means “the fountain of wisdom” in Latin. Just like Mannekin Pis in Brussels, the statue is sometimes dressed up in costume. I really hope that one of those costumes is of the Fonz. (Side note, when I first met my wife in France, I would sometimes make her laugh by singing the theme tune to Happy Days in French, “Dimanche Lundi, Heureux Jours…” etc).

Well there was no goodbye grey skies, hello blue just yet, so I popped into the cafe Leuven Central (my guidebook recommended this place) for a late lunch. I got a veggie curry and drank a Kasteel Rouge, which to my surprise was a kriek (or cherry beer). Krieks are popular over here, I’ve never been a big fan of them but this was quite nice. And that was my day out in Leuven. I had to get back to Brussels and back to London, and this little sojourn in Belgium would be over. 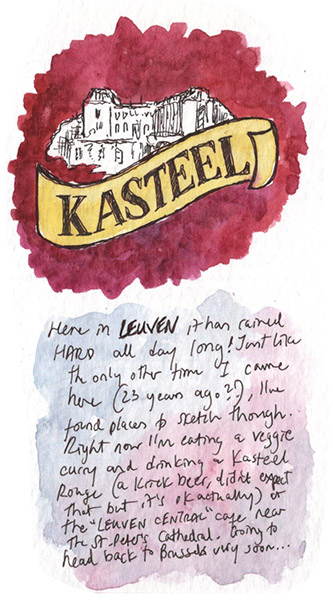