You probably heard the news: the Queen is dead. She died today in Balmoral, peacefully and with her family. We all knew it was going to happen some day, but it was a surprise, nonetheless. 96 years old, that’s quite the innings. I did always hope she would make it to 100, not least so she could write a letter to herself. There will be a lot of things said over the next few days and weeks by a lot of people, but it is undoubtedly the passing of an era, a real historic moment for Britain. Whatever any of us think about the whole monarchy thing, Elizabeth II was a good person, a very likeable person, quite a funny person and a very popular Queen, even if people didn’t like many of the rest of them. She was The Queen for 70 years, all my life, almost all my mum’s life, one of her earliest memories is the coronation. I was in London with my mum during the Platinum Jubilee. In her time the Queen had 15 Prime Ministers, with the newest one coming in just this week. She did manage to get quite a few Prime Ministers in her last few years. She saw England win the World Cup and Spurs win the Double, both of which were a really long time ago now. She saw the rise and break-up of the Beatles, and was still around when Get Back finally came out. Ironically, last night I learned the ukulele chords to ‘Her Majesty’, not knowing that the next day she would die. I drew this tonight, it has been a long time since I drew on one of those brown envelopes, I still have a big stack of those. I’ll probably give it to my mum. Sh really loved the Queen. I expect the Funeral will be fairly massive. And then I saw that Charles was ill too, and I thought wow that’s all they need, but I misread, it actually said ‘King Charles III’. So Prince Charles is now King Charles the Third. I always thought he would take on a different name when crowned, such as George or Henry, but that might have been too confusing for all those people who get confused when someone changes their name. It actually happens a lot. Many monarchs were called something different, Popes do it all the time, Anakin Skywalker changed his named to Darth Vader. I like the sound of “Charles III”. We need a new national anthem now – I know we just keep the same one and change “Queen” to “King” but maybe now is the time to choose an all-new anthem, one that’s a bit livelier at the big sporting occasions. I do have to get an updated ruler now – I have one of those ones with the names of all the English kings and queens on it – but that’s what happens when a monarch dies, you get a new ruler.

So rest in peace your majesty, you longest-serving British monarch, it’s going to be a long time before anyone breaks that record, and will Britain ever have another Queen? Probably not in my lifetime. 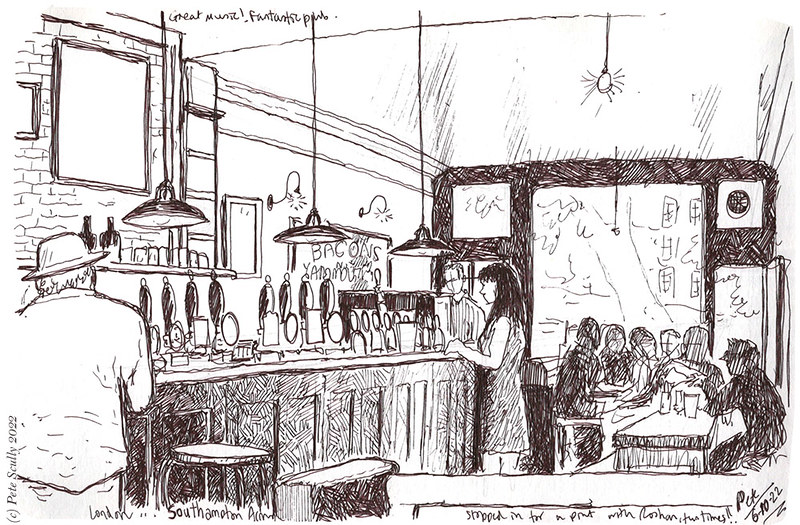 The last sketches from my first trip back to Europe this summer. I’d be back in a month and a bit, with the family, for more London and France. On the Friday, following a Thursday of staying in Burnt Oak and then working remotely in the evening (I say evening, I didn’t actually stop until almost 4am…that’s late even on California time, but there was a deadline), I went to Hampstead and met up with my friend Roshan. We walked about the village and over the Heath, it was a nice day and the views across London were amazing. I really miss London, and this is what I miss. We stopped off at a couple of places to have a cold drink and a sit down, these forty-something-year-old legs need resting more often, and ended up at a pub we’d never been to before, the Southampton Arms, down Parliament Hill / Tufnell Park. It’s a small place, with great music and a good choice of beers. This is the sort of place to spend a warm afternoon. I had to draw it, to catch a bit of the light and the mood. I used to live not too far from this part of London, up in the Highgate area, before moving to America. I often daydream of whether we would still live around there had we stayed in London; it’s so expensive to live there, and we could never earn enough with the sort of jobs we were doing, but you never know. I’ll always be a Londoner, but we will probably never live there again; I guess I’m Californian now. Still it’s nice to visit and see friends and family, while we can. I went back home for dinner with my mum, and that evening also met up with another friend James down in the Angel for an overdue catch-up (and lots of Beatles chat).

I flew back on the 12th, on the day when the COVID testing requirement to re-enter the States was officially dropped (I still had to do a proctored video test the day before, but by the time I had to enter my results into the system there was no need). We had a small family gathering the evening before at my mum’s, which ended in a lot of singing and dancing in the back yard, many Irish songs. I found it hard to sleep through the night though, as there was a big punch-up in the street between some of my mum’s Romanian neighbours, and I mean it was a proper fist fight between three blokes, you could hear the ‘thwack!’ and ‘pow!’ noises as the blows landed, even over the loud exclamations of a woman right below my window. It went on for quite some time, I wanted to tell them to take it down the park please, but given how loud we were playing the Wolfe Tones just a few hours before I couldn’t really tell them to pipe down. So I just kept my window closed and thought well, at least this will be a story. Usually I’m kept awake in Burnt Oak by the sound of foxes fighting in the bins and bushes, those things are loud. I made my plane in good time though, and I had an odd seat, in that there was no seat in front of me, giving me loads of lovely legroom. Also no screen to watch, but then I was going to be watching that Sex Pistols show on my iPad anyway, and listening to more Beatles podcasts. The guy next to me was a bit jealous of my legroom I think. He was chatty and kept trying to have a conversation with me at first, but beyond a few pleasantries I wasn’t really interested in listening to this guy for ten hours so put the headphones on and started drawing, because I just can’t stop drawing can I. 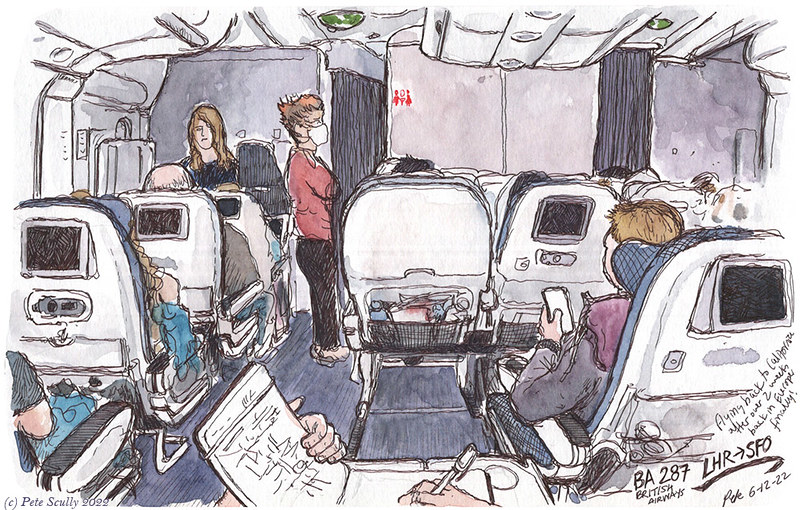