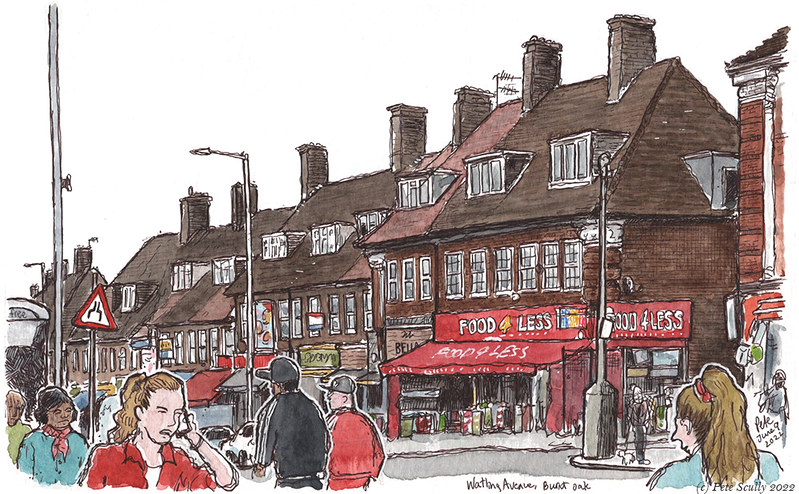 Before I flew back to the States, a couple more sketches of Burnt Oak, the hometown. After all the sketches from France and Belgium I needed a couple of drawings from up the Watling to be getting on with. I’ve had a lot of Burnt Oakers get in touch over the years, people who have moved away, sometimes pretty far (like I did), to say they like my drawings of the old manor, the place is a shared memory, and one that is always changing. I stood at the top of Watling Avenue and looked downhill. Those chimneystacks stepping downwards towards the station are iconic to me. I drew the other side of the street looking downwards way back in 2008, and then again looking upwards back in 2012, a decade ago. This time I added colour, and also a lot more of the people that passed by, because it was quite busy. We are a very multicultural area. The Romanian foodshop across the street (Food 4 Less) is where Pennywise used to be (I drew that in 2013), and next door you can make out a place called Bella. When I was growing up Bella, which was run by an Indian family if I remember, was a place where you could get all sorts of stuff. Household products, kitchen items, cleaning gear, cups (I have that mug that says “I’m a Mug from Burnt Oak” which comes from Bella), batteries, toys, you would come here to get your keys cut, oh and it was also a video rental store, this is where I would come with my uncle on a Saturday morning to pick out what films we would watch at his flat that afternoon. It seems that it’s just a cafe now. There is a clothes shop just out of view to the right that is called ‘Respect Men’, but has prominently displayed in the window what can can only be described as the illegitimate offspring of a tuxedo and a cardigan, white on the top half and black on the bottom, divided by an ugly carpet pattern going across the middle. Respect Men. I should have drawn it. Instead, I walked down the hill to the corner of Orange Hill, outside the library, and drew Woodcraft Hall. I’ve never been in there (never really wanted to either), but it’s one of those buildings I’ve known all my life that is just there, and long may it be just there. This crossroads was pretty much junction number one in my life. I lived up one arm of it, Orange Hill. Up Gervase Road, my mate Terry lived, and it was the way to Montrose and then on to Asda, where I had my first proper job (but not my first work). Left up the Watling towards Woodcroft Avenue, that was the way to my junior school, and on the corner opposite Woodcroft Hall is our local doctor’s, where my mum works. And then right is up Watling Avenue itself, you have the library, the shops, and of course the tube station which for me was the key to going everywhere else in the world, which I couldn’t wait to do. It started raining as I was drawing this, though I was sheltered in the doorway of the library, but I went home for dinner, and coloured it in later. 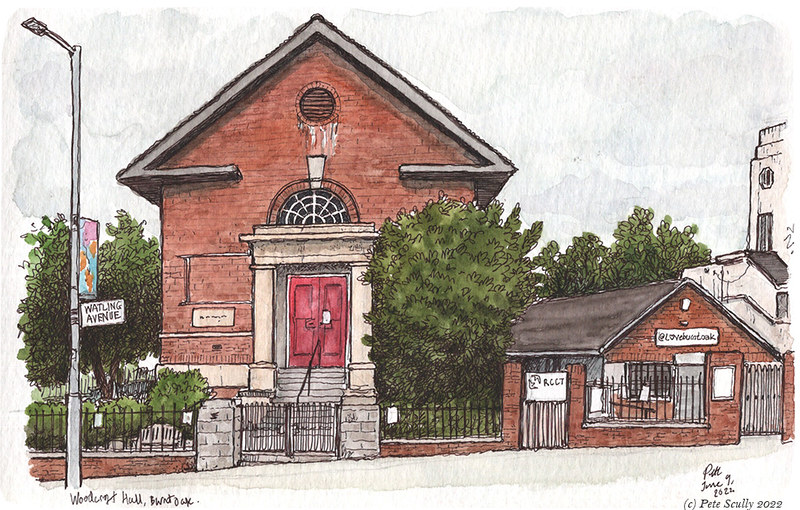