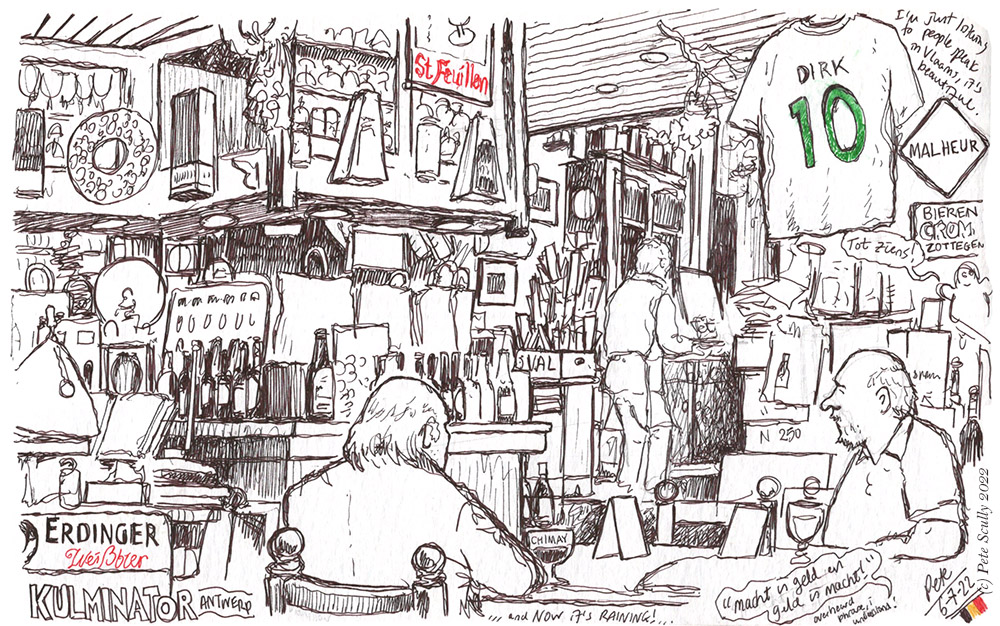 I went looking for a legendary Antwerp bar called ‘Kulminator‘. I thought I had been there before; back in 2000, I remember reading about this place in Antwerp with a ridiculous selection of beers, with enormous character that was worth looking for. I remember it took me a while walking around the evening streets in the days before smartphones with GPS showing us the way (that was only about three or four years ago for me, but now seems like medieval times), and when I got there, I was presented with what looked like a textbook but was actually the beer menu. I found a beer called ‘Forbidden Fruit’ (called ‘Verboden Vrucht’ here, or ‘Fruit Défendu’ as I know it) which I’d never seen before and sounded mysterious; it felt like I had completed a quest. It’s been my favourite Belgian beer since, although when I got back to Charleroi I told the barman at my local and he said, “oh no we have that beer too, here you go.” So I think that place was Kulminator, but I honestly cannot remember now, it was 22 years ago. I only had that one beer there that night, and then left to go explore night-time Antwerp a bit more, ending up skewering Pulp songs on karaoke; see a previous post.

This time I looked for Kulminator in the daytime. I had been doing some reading about old Antwerp taverns to check out and sketch, and this leapt out at me as possibly being that place from 2000. Even with my smartphone sending me upstreet and down, I still managed to get lost trying to find it. When I got there, the door was locked. It was open, but you couldn’t just walk in. There were signs all over the door. This place was serious about its beer, but you needed CASH, no cards. While I was in Lille I only ever used cash once, when buying a book off my friend Vincent Desplanche, but otherwise it was tap-tap-tap with the cards. In Belgium I found a few places which were cash only, but Kulminator evidently wouldn’t even let you inside. The door opened narrowly, and the face of an old lady peered through. “Cash?” she asked. “Ja,” I replied nervously, feeling like I was still probably not going to be let in. The clouds were starting to get greyer. Nevertheless she welcomed me inside, and it was like entering an old curiosity shop. You couldn’t see the bar itself – it was hidden behind boxes and bottles and glasses and all kinds of Belgian-beer-related knick-knacks, so it became more of a retreat den for the lady who ran the place. There were books piled high, shelves with board games, even a Brazil football shirt hanging from the rafter. The only people in there were an old man hidden away in a corner with his head in a book, and another older couple seated at a table, talking in Flemish. At the rear there was some kind of covered semi-outside area I didn’t go into, but I could hear a couple of American voices talking about beer, but otherwise the only sound was classical music, and Flemish chatter. I could see bottles of every kind of beer in the gaps through to the bar, and the old bar-lady brought to me not a massive menu , but a large chalk board, upon which were written the names of various beers. I think these were the ones on tap (“van’ vat”), and I felt that I should probably order one of these, and I should probably order the one she recommended. So she recommended a Gouden Carolus, and I took a seta by the window. The rain hard started and now it was chucking it down, so I was going to be hear for a while. It was very much the sort of place that you dream of finding as an urban bar sketcher. As I sat and drew, another older chap came in and was talking with the other patrons and the bar-lady. I can’t speak Dutch but I could understand a decent bit of what they were saying. I think he was called Vladislav and may have been an afficionado of classical music, it sounded like he was talking about it with a passion. I loved listening to the rhythms and patterns of their Flemish conversation with the backdrop of gentle music and pounding rain, and the occasional laugh as they made each other smile. I just sat in the corner with my beer and my sketchbook. I picked out some phrases; one of them said “geld is macht en macht is geld”, “money is power and power is money”. When the Americans passed through, looking nervously at the rain, they did speak with them briefly about a couple of beers they were on the lookout for, one of which was Krusovice Dark (a Czech beer). I joined in with a nod of approval and a thumbs up for that, I used to like drinking that here in Davis at the old Little Prague, but I haven’t seen it anywhere else. I had one more Gouden Carolus, and by the time I was done with my sketch the rain magically stopped, and I walked to the train station. I enjoyed this place and I’m glad I found it (and glad I had some cash). 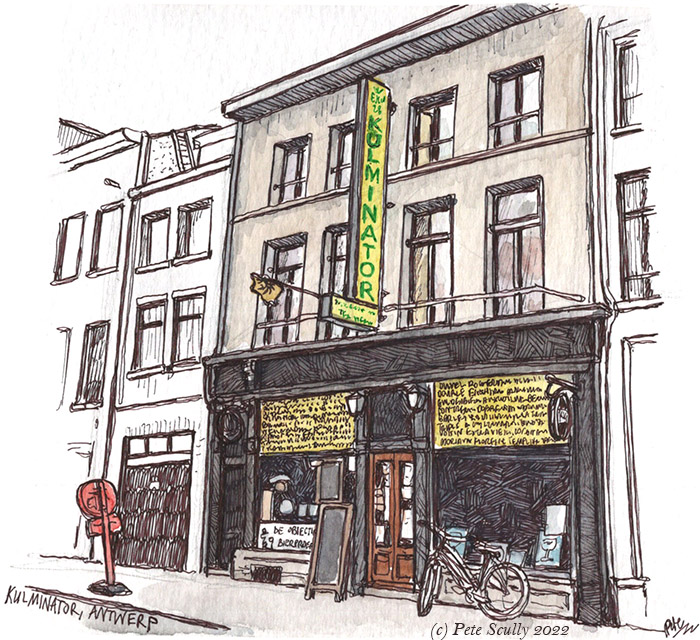 I drew the outside of it (above) from a photo I took quickly across the street before I went in, before the rain started. If you are in Antwerp, look for Kulminator. I needed to get back to Brussels though (well, I didn’t need to, I had no plans, but I thought I should get some rest). The next day I was planning to catch a train back down to the old haunt of Charleroi, where I would be climbing slag-heaps and drawing old rusty factories – at least, that was the plan.