A few weeks ago I took the train down to San Francisco for a day of wandering and sketching. It was just before my birthday, and I needed a day out with the sketchbook. You can only draw so much Davis. I didn’t have a plan as to where I would go, but I thought I would like to try climbing one of the big hills for a big vantagepoint view over the city. I knew the weather was supposed to be nice, though it started off foggy as you’d expect with the city. I took the super early train down from Davis, walked over to the Ferry Building to get the little bombolini from the lady that sells them there, I have my habits. This is what I do, I don’t mind being predictable. When I am long gone what will be remembered is that I would get the early train into the city for a sketching day and start off eating little bombolini, one filled with nutella, the other with lemon cream. In the book of my life that will be one of the scenes they film, over a soundtrack of a nice song I like, something by Belle and Sebastian. I decided to go sketching up in the Castro. It’s been quite a few years since I was sketching up there, and I wanted to draw something colourful. The last panorama I did in the Castro, back in 2013 before a sketchcrawl, I’d left uncoloured apart from the red sign of the Castro Theatre. The panorama above, which I sketched in the shade on the corner of 18th and Castro, was a lot of detail. So, I drew as much as possible in the almost-hour I stood there, added in a few spots of red and a few rainbows, and coloured in the rest later, which itself took ages. 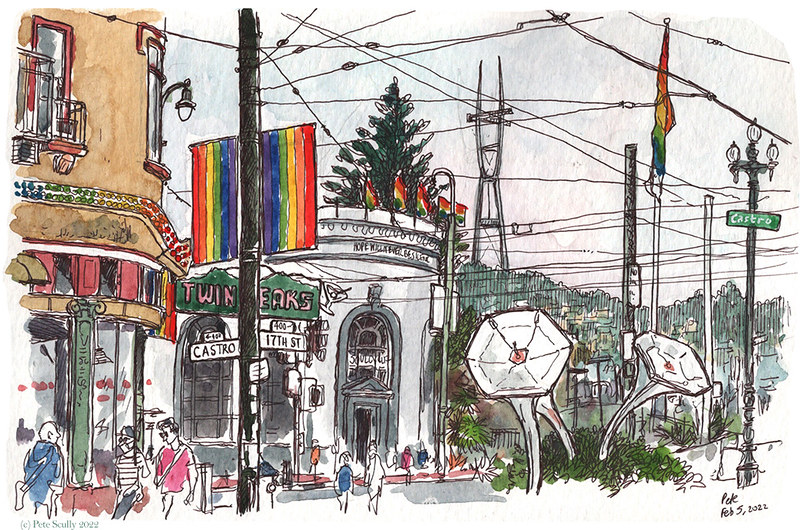 I actually drew this one first, while the morning fog still lingered, on the corner of 17th and Castro looking up towards Sutro Tower. I added in the watercolor while standing there, the sky had a strange pearlescence, and people lined up at the cafe across the little street form where the F car stops to get their brunch (it may have been a late breakfast / brunch, which is sometimes shortened to ‘lunch’). There was a guy camped at the bus stop, and there was a fair bit of odor wafting up, so I just remember a farty smell now when remembering sketching this, so I wanted to be done and run. I had decided I would go exploring up Corona Heights, but would draw around the Castro first, maybe eat lunch myself down there. I had a burrito at a place near 18th, and it was not very good. I didn’t even finish it. I had some Turkish Delight that I had bought at the Ferry building though, and that gave me some energy when climbing up the steep hills later that day. 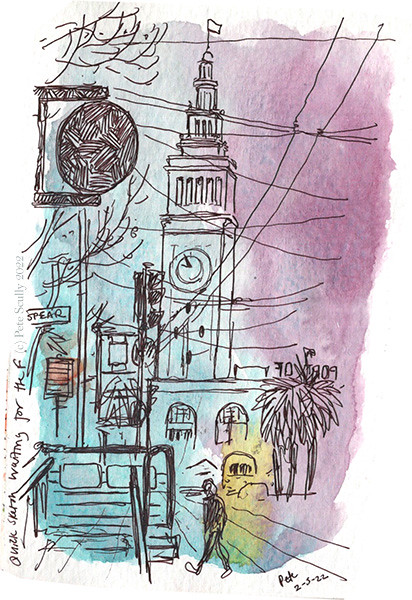 Above, this is a very quick sketch of the Ferry Building I did while waiting for the F streetcar to arrive on Market. I splashed a bit of watercolour on there for effect. I did the same on the other half of the page when I got on the F, and as it dried I added some lines in while we trundled uphill towards the Castro. This is a fun way to draw while on public transport. I haven’t spent a lot of time on any public transport for quite a while, save for the Amtrak occasionally, so i was glad that it wasn’t too busy and that they have a number of single seats still. These old streetcars are well known – they aren’t the famous San Francisco cable cars, but these historic vehicles originate form all over the world and have found a new home here in the city. You can learn more about them at: https://www.streetcar.org/streetcars/. The one I was on was a classic San Francisco original from the 1950s, but many others come from Milan, Philadelphia, Zurich, Kansas City, Melbourne, even Japan. I do love the streetcars. When I spent a year in Belgium, some Saturdays I would go wandering in Brussels and would get on the streetcars there until the end of the line, and just read my book while the streets of Ixelles, Etterbeek, Laeken passed by outside. 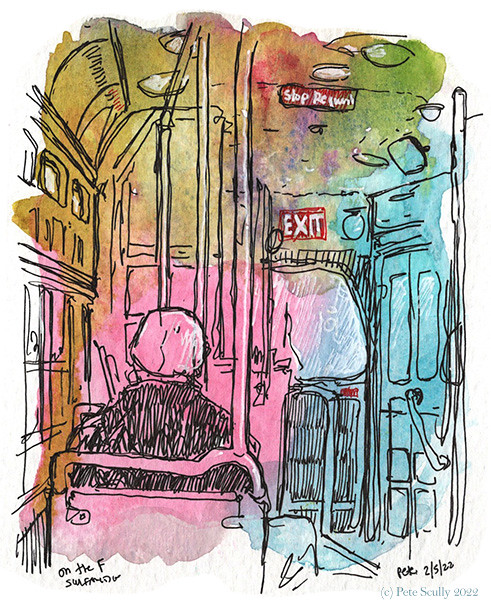 Below are a couple more sketches I attempted on the Castro before climbing big hills. The first, two big old houses where I just drew the outline and the alley, and ended up juts not bothering with the rest. The page is a bit dirty because as you can see from the sketches below, I decided to use coloured pencil to do some brass rubbing (well, masonry really), I saw the word ‘Castro’ on a stone plaque on the street and thought ‘that would look good in my sketchbook’, having seen someone else do that a couple of days before. Maybe it would have worked better not on the fairly thick Moleskine paper, because you can barely read it. So i drew some people instead with pencil. I didn’t get any interesting characters (such as the naked guy who I’d usually see passing by every other time I come here) but sketched a few passers-by and went off up the hill. I’ll post that next time. 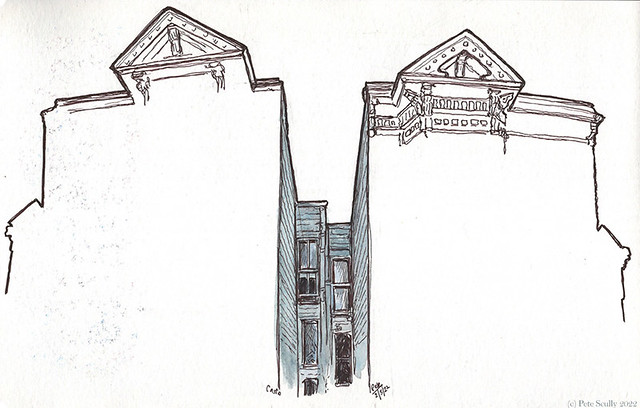 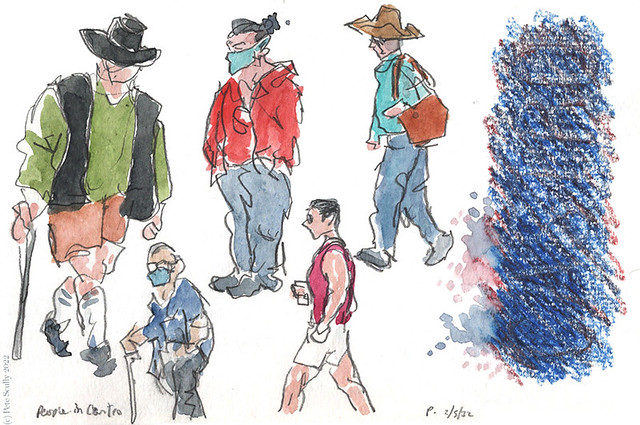