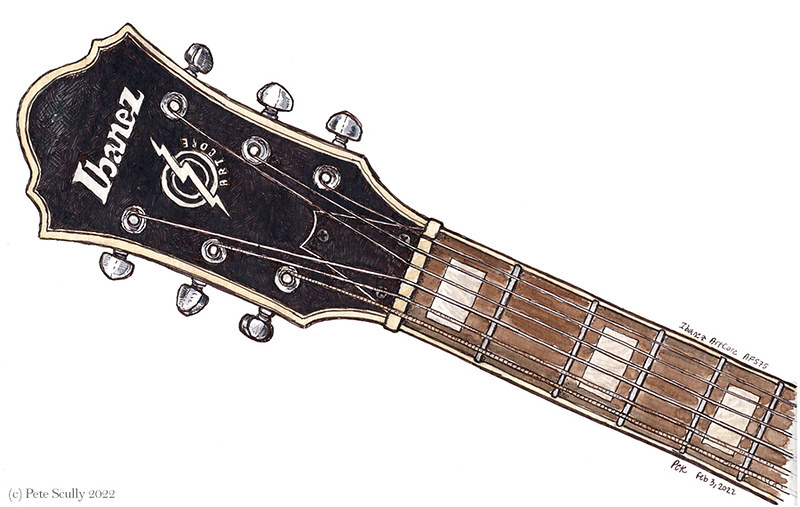 I bloody loved Get Back. Peter Jackson has done an amazing job with all that old footage from the Let It Be sessions, it really was like getting the Beatles back for a little while. I have so many things to say about it that I can’t even say them, so I continue to re-watch it, to listen to other Beatles buffs talks about it, and then re-watch it again. It’s an absolute joy, compelling to watch. To say that it has re-sparked my life-long love of the Beatles is an understatement. At the same time, I was also recently given the massive new Paul McCartney book The Lyrics for Christmas, which I’ve been eagerly anticipating and listening to Macca interviews about it for the past few months. So I’ve not only been listening to all the old Beatles stuff but many of my old Wings and solo Macca stuff, which I loved so much when I was a kid. On top of that, I have pulled the old electric guitar out from under the bed, the one I bought in 2006 and haven’t played since about 2009, it has been locked away in its hard case under the bed like a spaceman in stasis. It’s an Ibanez Art-Core AFS-75, in black. It has been nice catching up.

The Beatles were the band that made me first pick up a guitar in the first place, back in the 80s. My friend and fellow Beatles-nut Ralph had a guitar, so I got one for a fiver at a car-boot, but it was a pretty crap acoustic, so on my 14th birthday my brother got me an electric guitar, a Westone Concord II. I need to finally bring that old thing back from England at some point and fix it up, give it new pick-ups, make it a project. That’s what I actually learned to play on, though I was never very good and couldn’t do anything fancy, just play chords and do the the odd bit of finger-picking. It was easy to play though, easier than my Ibanez, which might look and sound better but never felt completely right. I think I’m a bit intimidated by this one. I would write songs, so many songs, it was always about trying to create, come up with new tunes. Anyway in 1996 while working at Thorntons chocolate shop in Oxford Street I went out on my break and bought a Hohner acoustic guitar at Macari’s on Charing Cross Road, which from day one had a beautiful warm sound, and it still has. I have brought that with me, to Belgium, France and over here to California, and it’s my favourite guitar. I got the Ibanez after moving to the US – my second Ibanez, actually. The first one, a black electro-acoustic I bought in Cotati a week or so after my arrival, broke when it fell over softly onto the carpet. So I went out and got this one as a much flashier replacement. I enjoyed it a lot and even recorded a few new pieces with it. I love playing with music, even if it isn’t exactly sophisticated, I just love it. And then I stopped, for some reason I just stopped playing entirely, and wouldn’t even pick up my acoustic. This lasted for years, and I was off guitars. I wasn’t any good, so that was that. I got a ukulele a few years ago after our first trip to Hawaii and loved it, so for the past few years I’ve been playing that off and on, and I love it, the gentle sound. I’m still learning but it’s already one of my favourite things. So I started getting my acoustic out a bit more, but not wanting to disturb, played quietly or when people weren’t home. After watching Get Back, my old Beatles love made me want to just be strumming, all the time, so I was on the uke or the acoustic as much as I could. Certainly on our trip to Hawaii I played a lot of ‘Here Comes The Sun’, which was optimistic given all the rain we had. Then last week I remembered my electric guitar, hidden away under the bed like a secret. I dragged out its heavy hard case, unhooked the clasps, and released it from its plush blue bed. Now the next bit should be, “and then the years fell away as I played a melodic solo, my hairs standing on end, I was back.” But that would be completely false because I was never that good a player, and the truth is I never felt comfortable with this guitar. It was nice playing it again, but it still felt like it could never be fully in tune when playing open chords (I felt the same back in 2006), I’m mentally used to the fretboard on my old electric, and I’m still sounding beginner-level clunky when it comes to riffs and scales. I feel a bit unworthy of such a fancy looking guitar. I think I’d hidden it away for so long because I thought, well I might just sell it. But then, you know what, I found that I could do a few things, and why not learn, why not take this time to improve? So that’s what I’m going to do, play it more often, try things I wasn’t able to do before, see what comes out. I got some new strings, I’m going to put them on this weekend. It feels like a new guitar, to the point that I feel surprised when I listen to the old recordings from 06-07, I did actually play it more than I thought. And I even drew it back then – see below, along with the chords of a tune I wrote called ‘Angry Words’ (ironically I didn’t write any words to that one, the tune was all in the lead riff). So now ‘m watching a lot of YouTube videos on doing this and that, and it feels like starting over, like an absolute beginner. Just like a sketchbook and pen, I loved having a guitar in my hands when I was growing up, it made me feel that little bit safer. 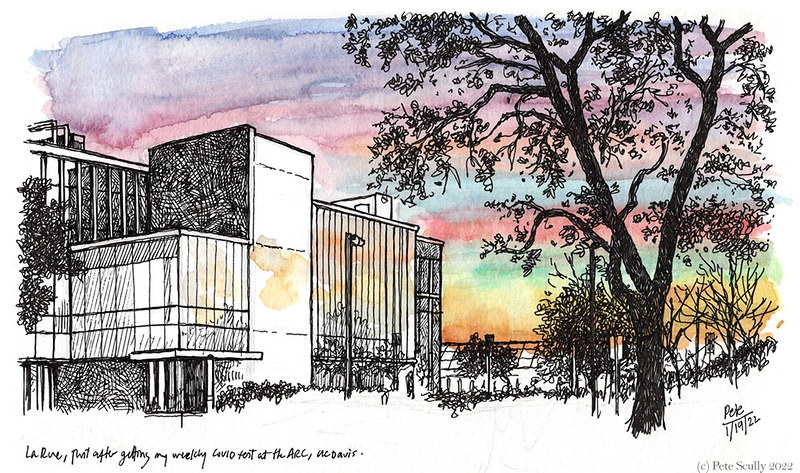 One evening after work, I was coming out of the ARC, which acts as the large Covid testing center for campus, and the sky was just blazing all sorts of colours. We get tested at least once a fortnight on campus, and it’s pretty handy, in and out. The building across the street there is the Student Health and Wellness Center. The sky was creating a psychedelic drama reflected in the windows, and so I grabbed my paints and a pen and tried as best as I could to draw what I could see. I couldn’t see the sketchbook too well in retreating light but I love the result. You can’t beat a good sunset. The colours are probably not that accurate and my paint makes a mess but that is the fun of capturing something like that, and my eyes are different from the next person. I got the general spirit of the sunset. There was a lot going on. We do get amazing wild sunsets here in January.