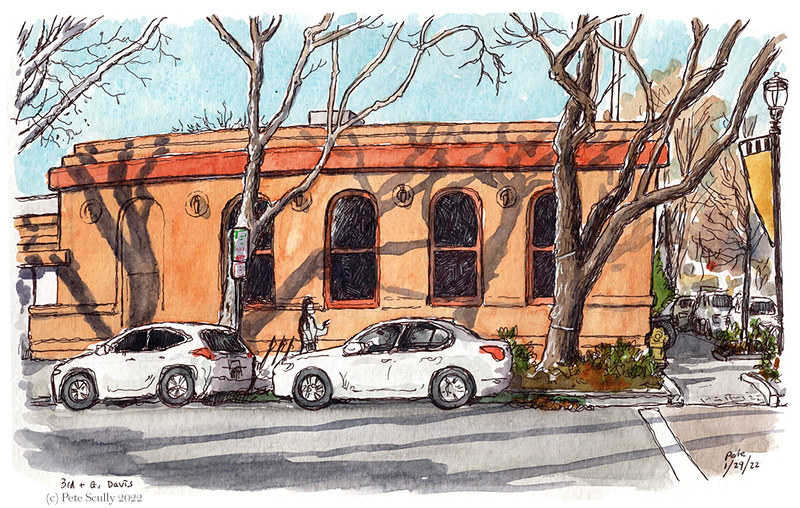 Another from downtown Davis. Done on the same day as the one in the previous post. Shadows against the building. This is on the corner of 3rd and G, and behind me G Street was closed off to traffic so the restaurants and bars could have people all seated out in the street. This building was (or still is, I don’t remember) a Thai restaurant, of which Davis has many. In decades past it was a bank, and it is a very ‘bank’ looking building. I was listening to a podcast about Neil Innes while drawing this. Along with the rekindled Beatles obsession I’ve started listening to the Rutles again, as they are a big part of the Beatles lunchtime legend. I went home and started playing a load of those Rutles songs on my guitar, and have been humming them ever since. I have been playing music more lately. I got a keyboard a week or so ago, and even though I’m a beginner I still remember the chords I learned when I was 13, and it’s fun to just play about with a few tunes. Like, a song will be in my head when I wake up, so I roll over to the keyboard and figure out how to play it from memory. I always liked doing that. This morning I had ‘Lonesome Town’ in my head, so I got up and worked that one out, mostly, before going to work. Reminds me of the 90s. What was that on, the Pulp Fiction soundtrack? Maybe it was the Reservoir Dogs soundtrack. Two CDs I used to listen to a lot in the day.