There’s a lot to explore in San Francisco, and I like a bit of urban hiking. The problem is that whenever I go to the city I usually only have a limited amount of time, most of which is spent stood on a pavement clutching a sketchbook in an awkward-looking but comfortable manner, drawing some building, and that takes up time. If I wander too far, I might miss the Amtrak bus back to Emeryville. A bit of urban hiking is fun though, although in this city it’s more like urban mountaineering, the hills are so steep. I had seen a few interesting city-scape views online that I’d not seen before, ones that would make good sketches, so I looked up the path to Corona Heights, a large hill between the Castro and the Haight, and filled with energy from a little sugary bag of Turkish Delight I’d bought at the Ferry Building I scaled the steep streets and found my way to the orange rocky promontory at the top, with a near 360 degree panoramic view of San Francisco. There were a few people up there, people with their little dogs, people just sat chilling and taking in the view, and the sun had come right out and was giving it all that. I always love to draw this city from above, so I found a spot in the shade of a rock and drew furiously. It was a lot of observation, although didn’t take too long. Drawing a scene like this you have to match things up like a puzzle, but also be careful not to put too much detail, and this pretty much reflects how my eyes were able to see things. Having the big rock formation in the foreground helped give it some perspective but also helped to make the job of drawing the landscape much easier, breaking it up so the view is more manageable. I remember drawing a similarly-sized panorama overlooking the city from Telegraph Hill years ago and it took ages, but was way less detailed, and I think it was because it overwhelmed me a bit. I take any opportunity I can to draw a cityscape but some are easier than others. This one for me represents a nice day, more than anything, exploring an area I’d not been to before. I got a text from my son while I was at the top, my new Casio keyboard had arrived, so I could play some tunes when I got home. I bought myself a keyboard to mess around with, not an expensive one, just one so that if I feel the need I can start playing a little music. I haven’t played a keyboard since I was at school, when I learned a bunch of chords from a teach-yourself-easy-keyboard book I got with my Christmas present keyboard in 1988. It’s nice having one again, and I’m already figuring out a few tunes. Anyway I think of that now when I look at this sketch. 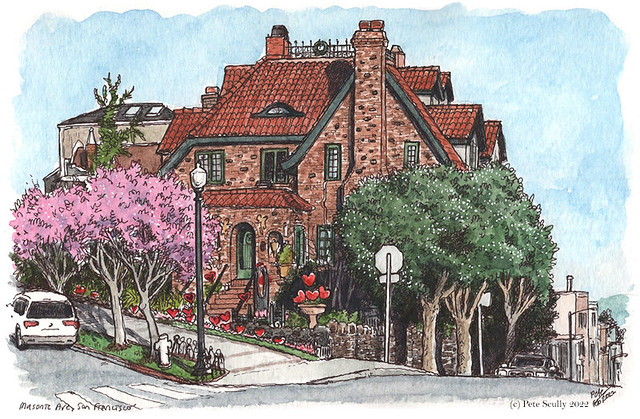 Afterwards I headed towards the Haight, so it was downhill, uphill, downhill, repeat. The streets curved and I might have gotten very lost were it not for that smartphone that keeps us all where we are meant to be, doesn’t it. I have been lost in some great cities. Paris, Porto, Portland. Even London, where those late night buses would take me to parts of the world I’d only heard rumours of, after I’d fallen asleep and the driver said it was the last stop. One time in Edinburgh back in the late 90s, I was leading my group of festival-flatmates back to our shared digs from the theatre, and we were so lost that they decided to go their own way, while I continued on my route. After about 30 minutes of being even more lost, I actually bumped into them again, coming in the opposite direction. They laughed at me for being even more lost, but they were lost too weren’t they? Still they ended up following me and we found the house, but I never heard the end of it. Thing of the past now, with our modern world. So I didn’t get lost, but I wandered about and saw some amazing houses. One of them I saw from below as I climbed Masonic Avenue, the rear looking like something from a Ghibli film, and I thought about drawing it then. However when I reached the top of the hill, I was blown away by the front, a picturesque brick house adorned with hearts for Valentines Day, with pink blossoms lined the street. The garden was very pretty and there was a sign calling it ‘le Petit Chateau des Cavaliers’ above a picture of two dogs. It wasn’t ‘petit’, but there were cavaliers; a man came out walking two cavalier King Charles spaniels, who I’m assuming are the masters of the house. I used to have a dog like that when I was a kid, she was called ‘Lady’ but I just knew her as ‘Soppydog’. I told him that this house was really beautiful and had brightened up my day hugely, as I was juts wandering around the city. He said it was a hundred years old. I stood on the corner opposite and did a very cursory outline sketch, but didn’t want to stand here too long and decided it was a ‘do later’. So I ‘did later’, drawing it on the train and back at home around the outline I had started. I went down to the Haight, and didn’t do any more drawing there because, well, I always forget I don’t like the Haight that much. So I went for a bit more urban hiking, and climbed Buena Vista Park, before making my way down again to catch the N-Judah down at Duboce. Day in the city, done. Though I did stop into the Lego store on the way home.