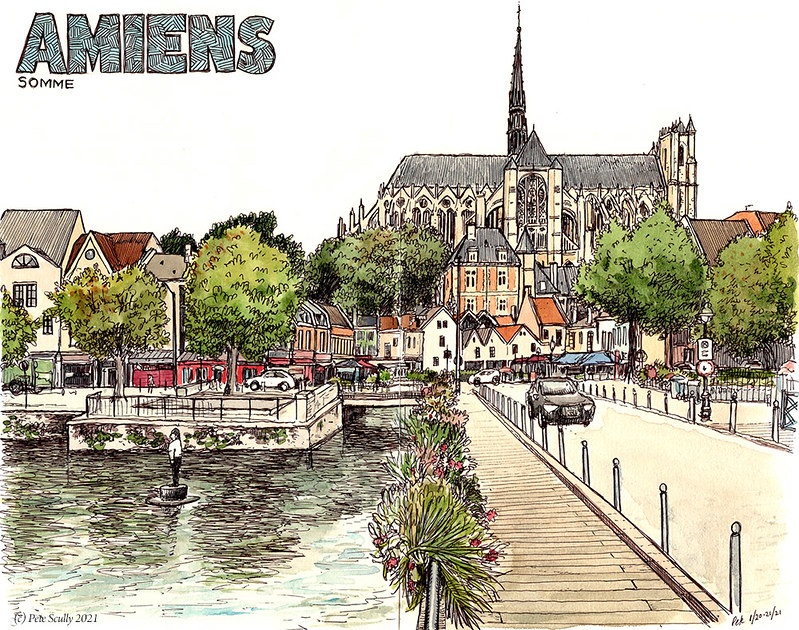 Stage 4 of the Virtual Tour de France finds us in the northern city of AMIENS, on the river (and department) Somme. It is difficult to say the name ‘Somme’ without thinking of the historic atrocity of the 1916 Battle of the Somme, in World War I. Three million soldiers fought in that battle, with over a million wounded or killed. Amiens is right in the heart of World War 1 country, and itself saw a 1918 battle that ended in an Allied victory. World War II didn’t exactly pass it by either, with another Battle of Amiens in 1940 when Germany took the town, and later on pretty heavy bombardment by the Allies in 1944 before it was liberated. There were wars and sieges and sackings here in the many centuries before, but Amiens and the Somme are inescapably linked with the awful World Wars.

This is a nice view though, down by the river, looking up at the cathedral. I could imagine coming here and eating lunch by the Somme, before driving on to another town for a bit more history. I found out recently that an ancestor of mine from Dublin fought in World War 1 and was wounded in a gas attack at Loos, not far from Lens. I saw my great-great grandfather’s photo (his name was James Higgins, as was his father, and his son who I think also fought in that war?) and he had the most amazing bushy “General Melchett” moustache. He wasn’t a general though, just a regular soldier. I also saw a postcard he sent home to his wife (my great-great granny) in Dublin from Loos before the battle took place. Fascinating stuff, I never knew he even existed until recently. I never inherited the moustache. It was a big handlebar one with two pointy tails, that reminds me a bit of the Red Bull logo, or two rats fighting. I would not know how to take care of an amazing moustache like that, I would probably get it in my soup, this is why I shave. I only briefly had a moustache, though it was part of a goatee, and that was for a few months in the 90s and that my friend is where for most people goatees should have stayed. Funnily enough I never saw anyone in France with that classic French moustache, the one with the twirly sides, that all cartoon French people have (along with the beret and the onions and the baguette), but I have seen many hipster people in America wear that ‘tache. I couldn’t pull it off.

There does appear what looks like a lifesize Subbuteo figure standing in the river, to the left there. I think it is called “L’Homme sur sa bouée” (“The man on his buoy”). It seems that it’s common for the people of the town to dress him up, put t-shirts on him and so on. He is the work of German sculptor Stephan Balkenhol and was originally installed there in 1993, but being made of wood and manhandled by so many locals it degraded a fair bit over the years and was replaced in 2019 by the artist, this time in aluminium. Or maybe it is still wood but now painted in aluminium, it’s hard to tell. L’Homme sur sa bouée has become a bit of local celebrity in Amiens. There are two other similar statues by the same artist placed nearby against the walls of buildings that the man in the river is looking at. If I ever got to Amiens I will look out for them all.

After Amiens we leave Picardy behind and head into another part of France famous for its role in World War II: Normandy. So join me on the Road to Rouen.