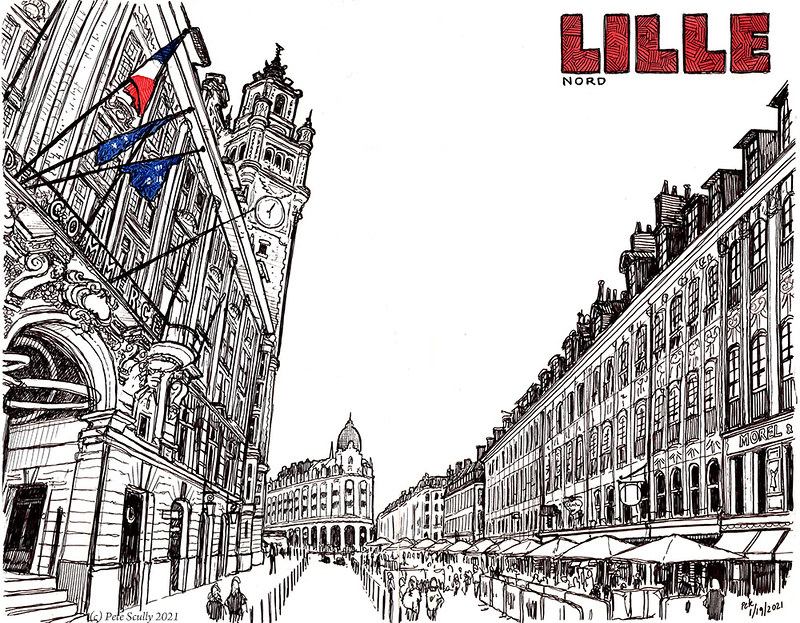 We have arrived at Stage 3 of the Virtual Tour De France, leaving Boulogne and the English Channel behind for now and heading to one of the biggest metropoles in France, the city of LILLE. In real life, I have only ever been here once, to change from a coach at the coach station to a train at the train station. That was on my way to Belgium, when I spent a year there during university. Despite Lille being so close by, and looking quite nice on my brief dash through the streets, I never returned. Originally I was supposed to spend my year in the nearby city of Tournai, a pleasant looking town, but this was changed at the last minute to the city of Charleroi, which is a less pleasant looking town. Next year the Urban Sketchers France Rencontre Nationale will be held in Lille, so if I’m lucky enough to travel at that time, I might try to go to. Being not far from both London and Belgium I can fit them all in. For now, I just have to make do with travelling via the magic of Google Street View.

There were a lot of places I could sketch in virtual Lille. I chose this one because I could tell there was going to be a theme of clock towers, or just towers in general, in my drawings. Maybe then I could call it “Tours de France”. I think I just needed to do a big complicated piece with lots of windows and perspective, although I didn’t quite intend for the tower to curve inward so much. I blame the reference, as well as the angle my sketchbook was at on my cramped desk. This is also so far the only one I decided not to colour in, just leaving the flags for a bit of bold accent. If I drew this in person, I may choose not to spend so long drawing all those windows. The perspective would also be very different, more in line with human eyes and not the differently-curved lens of a camera. It would also be lower down. It should be obvious in a sketch where the sketcher was standing. It’s obvious in this sketch for example that this was done from a photo taken by a camera taller than a human. If a person would have drawn this, they were either standing on a table, or they have a very long neck.

Lille – Rijsel in Flemish – is in the French part of Flanders, not the Dutch speaking part which is over the border. It’s the birthplace of Charles De Gaulle, one of the most famous Frenchmen of all time, as well as footballer Nabil Bentaleb, who played for Tottenham for a couple of years. This year the Lille football team (‘LOSC’) held back the oil-state-backed riches of Paris St.Germain to win the Ligue 1 title for the first time since 2011. These days that is quite an achievement, as PSG have been dominating since they won the Gulf-State Lottery, when they never did before. When Lille last won Ligue 1, it was in the middle of a period from 2008 to 2013 where there were six different French champions in six years – Lyon, Bordeaux, Marseille, Lille, Montpellier, and PSG. I am quite into French football, and have been since I visited France in the mid-90s when I was studying French A-Levels at college and discovered the amazing France Football magazine. At that time Lille were not really prominent, but a few other teams that have since fallen to the wayside were, for example Nantes, Auxerre and the local derby rivals of Lille, RC Lens. I decided not to stop in Lens on the Virtual Tour, partly because you can’t stop everywhere, partly because there wasn’t much I wanted to draw. Lens, just south of Lille, is in the heart of the mining country of northern France, and this region, including Lille, is the land of Ch’ti. Ch’ti or Ch’timi is the local Picard dialect of Nord/Pas-De-Calais, and not a dialect I have ever studied much of. There was a French film set in the Nord department called “Bienvenue Chez Les Ch’Tis“, which I’ve not seen yet, but was apparently massive in France. It’s translated as “Welcome To the Sticks”, which tells you how the French see the Nord. While the Nord area of France seems really close to me, coming from south-east England, to the rest of France it feels pretty far away and remote. My first knowledge of Ch’ti comes from a French friend I had in Provence, Florian, who gifted me a large bottle of Ch’ti beer when we watched a World Cup game together. I’ve read that the “Ch'” sound is sometimes used instead of “Le” or “La”, for example in “Ch’Carette” (The Car) or “Ch’Co” (The Cat); instead of “toi” and “moi” they say “ti” and “mi”, so that’s where “Ch’timi comes from. I suppose. I need to read more about this dialect. It has been a long time since I studied this stuff; at the library I used to pore over the Routledge book “The Romance Languages” which explored all the different dialects of French, Italian, Spanish etc, but haven’t read about this subject in years. Still, every time I think of Ch’ti I think of the taste of the cold refreshing beer Florian gave me in that hot summer in Aix-en-Provence. One day I’ll drink one sat outside a cafe in Lille, sketching and reading the latest France Football.

Next up in this journey, we’ll go into Picardy itself and to the city of Amiens.