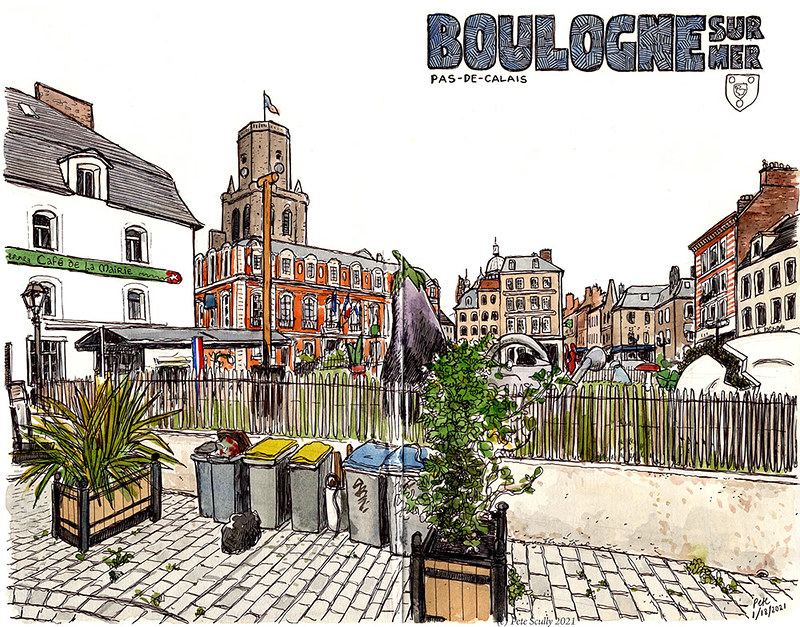 Stage 2 of the Virtual Tour De France finds us in BOULOGNE-SUR-MER, a little further down the Côte d’Opale from Calais. This image shows us the town square, with the historic Belfry (a UNESCO world heritage site), the town hall, a cafe, some bins, a cracked plate, a giant watering can, and a massive aubergine, what Americans would call an eggplant. When scouting locations to virtually draw, this was obviously the right choice. Boulogne is a historic town (they all will be, by the way, I’m unlikely to draw a town on this virtual tour and say “yeah, no history here lads”), going back to the Romans, being fought over between the French and the English in that famous war (“100 Years Of Hurt”), and of course during World Wars I and II. Napoleon used Boulogne to amass the Grande Armée ahead of his planned invasion of the Nation of Shopkeepers, but had to abort those plans when he realized those shopkeepers only allow two kids in their shop at a time, to prevent shoplifting. Foiled again, Boney! This part of the world, northern France, saw a lot of action in those wars and its legacy is inescapable. There was a large battle here in 1940 that ended in a German victory, shortly before the evacuation of Dunkirk, but the Allies were back in 1944 to take the town in Operation Wellhit, which is a name I love, because it sounds like WellHard. But of course as with so many other kids from south-east England, Boulogne is synonymous with school trips to France, easy access from Dover and Folkestone. We would go over for the day on a coach, and a ferry, walk about town a bit, take a big group photo, look at some old buildings, then go to the Hypermarkets for an hour or so to buy some cheese or foreign chocolate before driving back to London. I will never forget buying a chocolate bar called “CRAP”. It was probably the greatest moment of my childhood, being about 12 and finding a chocolate bar called “CRAP”. I kept the wrapper pinned to my cork-board in my bedroom for years like a trophy. Other people won football tournaments, spelling competitions, the Duke of Edinburgh Award, I found chocolate bars with funny names. My other favourite as you may remember is Big Nuts, from Belgium.

We did do a longer school trip here though in around 1990, in the third year, spending several days in a beach suburb of Boulogne called Le Portel. I have many memories from the trip, although at the same time my memory is very foggy. We visited a World War II Blockhaus, a huge concrete fortification from which Hitler and co fired massive rockets to bomb the UK. We went down to Paris one day as well, walked about by the Seine, looked at the Eiffel Tower, giggled at the Pigalle as our coach passed by. It was the first time any of us had seen a cop with a real gun. We all stood behind him waiting to cross the road pointing at the holster on his belt, we had only ever seen cops with guns on American TV shows. I remember we even visited Sangatte, the site where they were building this new thing, ‘Le Tunnel Sous Le Manche‘, an actual tunnel going under the English Channel, which I had thought was a pipe dream (haha) but now it was becoming real, and that meant that of course French rats would crawl through and give us all rabies, so that’s all we talked about. We stayed at a hotel near the beach, the perfect place for groups of kids to misbehave. My friend got banned from all future school trips for doing a ‘moony’ in the hallway. Another friend got his bag stolen off his shoulder in the street by a local kid on a moped, those local kids loved their mopeds and their bag-theft. In general though it was just usual teenage fun and games, mostly staying up chatting too late at night, to the point where our teachers actually had to wait in our rooms until everyone was asleep. It must have been great fun being a teacher on one of those school trips with a bunch of 13-14 year olds, huh. I had a little tape recorder I would bring around and we’d tape ourselves chatting nonsense on the school bus and listen to it later. I remember the tape getting very mangled so everything was distorted, I think we tried to add that mangled noise in to the background of one of our songs a couple of years later when we were trying to be a band. I do remember buying a record on that trip though at a local record shop, a stupid looking French comedy song with a ridiculous cover of classic French beret and mariniere wearing onions-and-baguettes types, I think it was called ‘Vive La France’ , but of course it couldn’t play on my tape player because it was a vinyl record, so I had to wait until I got back to England to discover it was unlistenable shite. It probably put me off French music for years. Apart from that, the memories are a blur, but good memories anyway. I’ve never been back to Boulogne.

Today is July 14, what we call Bastille Day (but the French don’t), the French national holiday. Right now the real Tour de France is on Stage 17 already, zooming around the Pyrenees from Muret to Saint-Lary Soulan Col De Portet, and should be in Paris in just a few days time. For this Virtual Tour, our next stop will be in the home of the newly crowned French football champions, Lille. A bientôt!