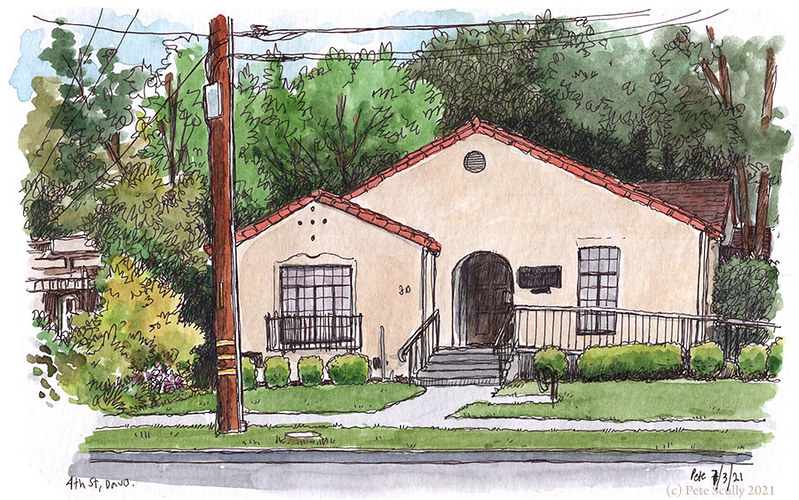 Day before Independence Day, the Day of England 4-0 vs Ukraine day, I went downtown on a Saturday afternoon to do some drawing and look in a couple of shops. I stopped and drew this building on 4th Street, some Law Offices I think (I need new glasses/eyesight). It was pretty quiet, I wasn’t harassed by any mad people this time (unlike just up the block a couple of months ago), and I wore my 2010 red England shirt, the only England shirt I own. (It’s coming home by the way, I don’t know if you heard, but it totally is). There were leaf blowers behind me blowing the leaves and dust or whatever, but they didn’t last long (maybe the leaves blew back, I had my headphones on). Amazingly I had never drawn this building, to the best of my knowledge. I probably have in the background of another, or maybe I have and forgot. I’ve drawn a lot of Davis drawings and usually remember them all, but I’ve been here a good long while now. Nearly sixteen years, coming up on that. I’ve been drawing it for fifteen of them. One day I’ll do a book of them. I’ll say that again in another fifteen years. I can never seem to get it together to write it, well I suppose a book of drawings doesn’t really need much writing. Be better off without it really (what was that 1 star Amazon review of one of my books that said “by the time he finished what he was saying I had forgotten what he was talking about” or something), the sketches are the words anyway. So, another one of 4th Street, Davis. Happy 4th, America! 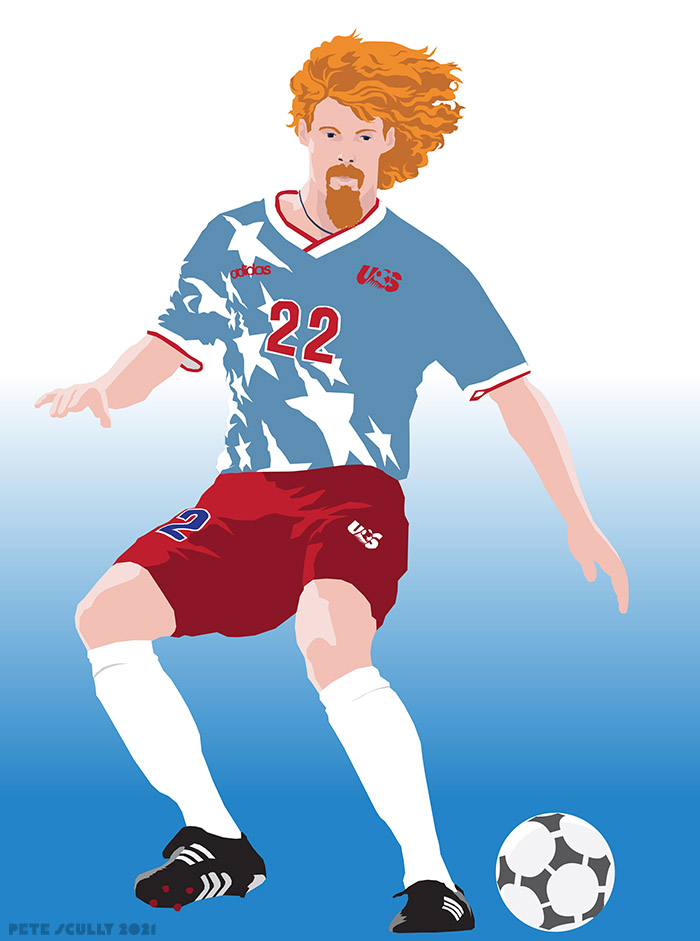 Yes, I know it’s Coming Home, and Southgate is a genius, and yes I did do a Kane illustration, but today is the birthday of my adopted country (actually I think it adopted me, although since I’m still a permanent resident I am really just fostered). 7/4 happens on July the 4th over here, unlike in Britain where people celebrate American Independence on April the 7th, along with all the old dad jokes like that. To celebrate, here is perhaps my favourite American football player (ok, my favorite American soccer franchiser) Alexi Lalas, wearing my favorite USMNT soccer jersey (see, I can speak American), the 1994 away kit. Along with the amazing red and white wavy stripe home kit, this was my favourite kit from the 1994 World Cup, USA 94. It is an all time epic. As a proper redhead myself I loved Lalas’s amazing barnet, and the King Tut-esque beard, and I actually did copy the beard a few years later (without the moustache) (it was the 1990s), though my attempts at the hair did not go too well. See my hair is curly, a bit like Lalas’s, not ring-curls but uncontrollable waves. I knew blokes with long hair who could just wave it around like an extra appendage, especially when dancing. Anyway my hair just grew upwards, like straight up. So that didn’t work. Lalas is a bit taller than me though, so maybe gravity works differently on his head, I don’t know. He’s often on TV these days doing punditry, no longer long haired and long bearded, but still with a bit of personality. So happy birthday United States, thanks for giving us Lalas and the greatest World Cup shirt in history.