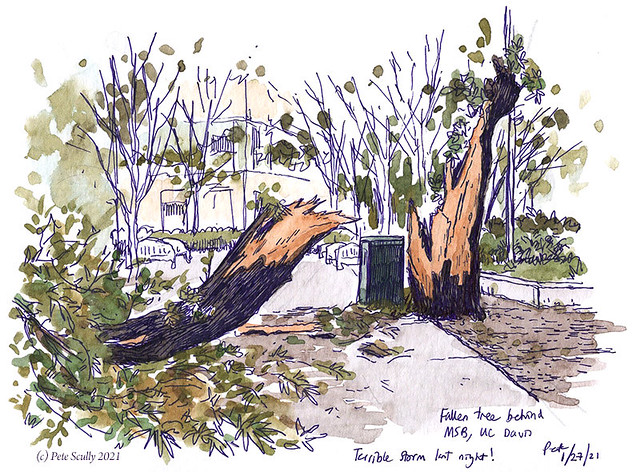 That big storm we had a couple of weeks ago felled a lot of trees. When I say ‘felled’ I mean ‘tore down violently’. The storm was loud, louder than I remember any storms here in Davis (and I’ve seen a few now, though very far between). Maybe it’s because I’m a homeowner now that I’m a bit more anxious about flying foliage and tumbling trunks but I didn’t get much sleep that night, listening to the deep booming howls and the intermittent crunching sounds from our neck of the woods. Next morning I went out to review the damage, while our internet was down, and power out for thousands (but not us, thankfully). Debris strewn everywhere, trees (or the tops of them) toppled, one large thick tree had fallen directly onto the roof of a house, another just missed the house but completely blocked the drive, other huge trunks blocked pathways on the Green Belt, but most concerning were the large branches in trees that had snapped but not quite fallen, hanging precariously, and it was still a bit windy. Falling branches can be deadly. So I proceeded with caution and went home. Still, I needed to do some work, so I went (carefully) down to campus, steering clear of dangling branches and passing many big old wounded oaks, and into the safety of our large solid stocky building. It always feels much safer watching the world from a window up there, but we’ve had our share of trees go down outside over the years, and this past storm was no different. I saw the tree above snapped like a broken doll at the back of the building, so I did a quick sketch of it. (I thought I’d keep a log of this event). Soon after it was cordoned off with yellow tape, and a couple of days later a man with a chainsaw had come to cut up what he could. It’s only now, a fortnight later, that many of the trees that went down are being removed, they had to deal with the most urgent ones first (like those plonked onto rooftops or blocking traffic, or the many that went down taking the powerlines with them). I wonder if any of them went down like Neymar, falling dramatically and rolling around a bit, maybe waving an imaginary yellow card. Poor old trees though.