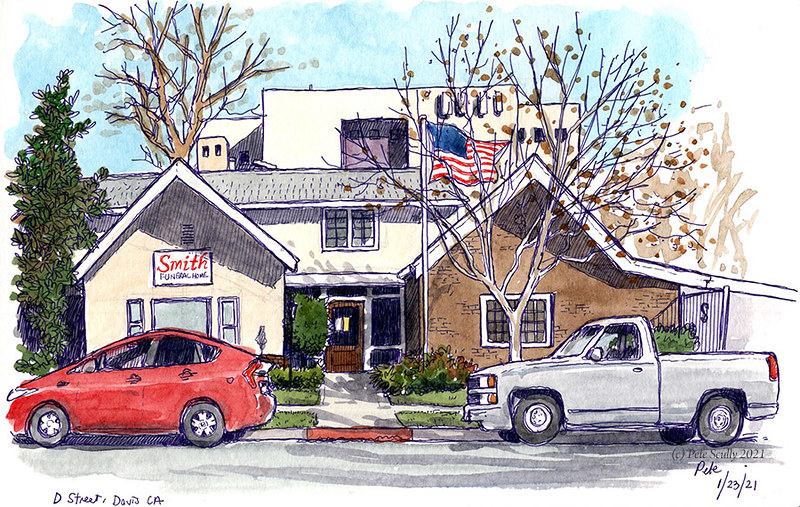 So far in 2021 I have drawn every single day. There was only one day that didn’t get a ‘dated’ drawing (Jan 17 I think it was) but I was probably finishing off another drawing, or I did two the next day or something. Either way I am in a bit of a productive patch with drawing. It makes it easier to do the next one, but it also means that I get worried about stopping, in case I fall into another period of non-drawing. I did got for periods in 2021 when I would only draw once a week or once a fortnight; in December I did only a handful of sketches all month. In the period of Jan 1st – February 3rd I have done 36 drawings, several of which are double-page spreads (in colour), and several more are very detailed drawings of places in northern France (I have started another Virtual Sketch Tour, this time De France, and the drawings are bigger than on my Great Britain one from 2020). At the same time, I have started running again. I was running a lot last year, and really improving my times b midsummer, but then the wildfires came, and the air was too dangerous to go outside in, and the running suffered. Since January started I am back running again, and I’ve run a total of 44.5 miles on 19 runs (should be a few more by the end of this morning, I am awake early again, and the pre-work schedule on early mornings is “write/draw/run/get ready for work”) (or more accurately, “get bugged by cats/write/get bugged by cats/give in and feed them early/draw/still get bugged by cats despite them being fed already/run/tell cats to bog off, they were fed already, but they’re like yeah we’re hungry again/get ready for work”). So yeah, trying to be more active in the exercises, both drawing and running, just hoping to stay fit both ways. You have to exercise your drawing muscles as much as any other. I do sometimes see sketches I’ve done after no sketching for a while and it’s obvious to me I was out of shape.

Anyway, this sketch was one of those lunchtime sketches I needed to do to keep drawing, just a ride downtown to draw a building, I settled on this one I have drawn a couple of times in years long past, Smith funeral home. Not a great subject in this time probably, a funeral home (and I know people who have passed away in the past month or so, and that was probably heavy in my thoughts), but it is an interestingly shaped building. I first drew it in October 2010 in my ‘Davis Moleskine‘, a long accordion sketchbook (from the first USk Symposium) filled with Davis drawings. Wow, that was over a decade ago. I would do another of those but you know how much I hate actually standing there with the accordion book, they wind me up more than other people. Others can stand or sit there with either side of the accordion pages falling gently to their sides like cherubs on a renaissance ceiling (what?), whereas when I try to draw with one I look like Frank Spencer fighting with a library. Although in the sketch below (from 2010) you can see I carefully folded the pages back into the book and added little clips (this is why I drew the book on the page, actually, to make it look like I knew what I was doing when in reality I could never get the pages flat and was flailing about annoyed at ever starting this project, which I drew using a brown Pitt fineliner and grey marker, all of which seemed Fine At The Time but aren’t my usual tools; I hadn’t yet quite discovered the brown-black uniball signo UM-151, though I will say the Pitt fineliner did move more nicely on the waxy Moleskine paper than the Micron did). The funny thing about that project, I left those gaps at the top and bottom partly so I would not have to draw quite so much (these took longer than a usual similar-sized sketch in the watercolor sketchbooks, for some reason), but also because I was going to write stories about Davis in those areas like the Bayeux Tapestry or something. I was obsessed with the Bayeux Tapestry. I’m glad I didn’t. I did add in various foreground objects such as trees, lamp-posts, Stop-signs to use as markers of transition from one drawing to another. The whole project was inspired by Paul Heaston’s recent long-form drawing of Main Street in Bozeman Montana, but I abandoned the ‘whole street’ idea myself immediately (though I did do something like that of Hutchison Drive in 2016) (and I still might do one of either 5th or 2nd St sometime). 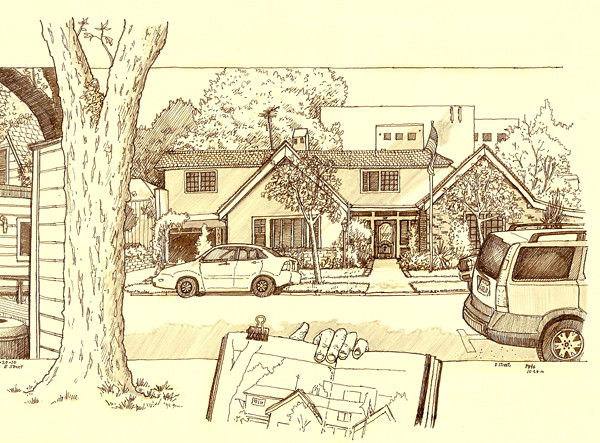 Why draw so much? My excuse has always been that I am recording the world I am in so I remember it later, and now I’ve been in this particular world so long I am just recording the changes, performing some sort of public service maybe, but I think it’s really so that I can have something I have made (other than an untidy bedroom) to show for my time here. Books, CDs, even football shirts are all just stuff that someone else has to not care about when you are gone, but I suppose a collection of sketchbooks might be a more personal leave-behind. I don’t know, it’s a bit early in the morning for this sort of thought. Time to feed the cats (again? seriously lads) and go for my run, the sun is starting to come up. It’s a new day, baby.