I’ve gone to work on campus a few times lately, though hardly anyone is about. The Davis sky has been interesting lately, for a change (I have gone through more cerulean blue paint over the years than any other colour, so I get really excited when I see a cloud). We did have a massive storm that knocked out many peoples’ power, as well as our internet for almost a week, as well as so many trees, I’ve not ever seen so many get blown down before. Anyway my department being on the fourth floor the view from the window is pretty good. For a long time working here I had no window and I’m still not used to the novelty. The view above however is actually from the recently-vacated office next door to mine, as the view was slightly different. I say recently-vacated, it hadn’t been used since last March, hardly any of them have, but the person who hadn’t been using the office has recently left. It’s odd rattling around the department with hardly anybody there, one other staff member comes in to do IT stuff, occasionally one of the faculty might be there and maybe a grad student, otherwise it’s like a ghost town. I worked straight through lunch this one day, not taking a break until after 3, so I decided to draw a panorama of the view. I drew a lot before my next afternoon Zoom meeting, but I finished most of the colouring after work, when the sun had already set; the sunlight doesn’t hang about in late January. Click on the image for a better view. You can just about make out the new construction in the background, the Teaching Learning Complex, while the ochre-coloured building on the right is the Crocker Nuclear Lab. Yep, this sucker’s nuclear. 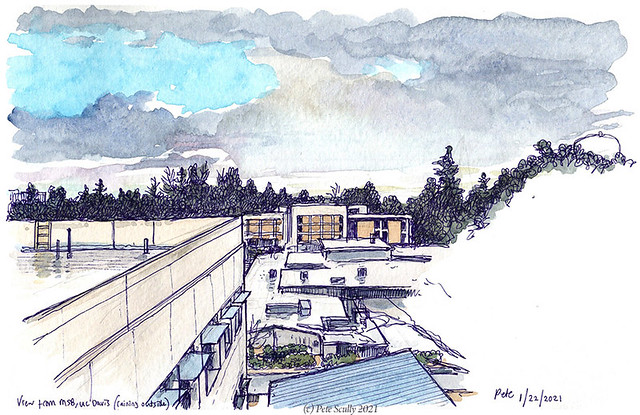 This is another view, also not from my office. It’s looking west, rather than north, and this was while there was rain outside. Moments after finishing, there was a beautiful rainbow. I took photos but had already put my paints away. This was done from the corner office, which I was in trying to reorganize office assignments for next year. There is a stand-up desk in there, an I’ve been contemplating getting one, so decided to try it out by sketching the view from the window. I liked it, I think I need one. The sky was all sorts of dramas. It was like BBC2 at 9pm or whatever. This was actually Davis at 4pm on a Friday. The sort of dramas you got then in England were more children’s TV shows like The Little Silver Trumpet, the one I was in when I was 4 and thought it was all real. The best school-age drama, Grange Hill, that would have been on at 5:10. Zammo, Ro-land, Mrs McCluskey, Bronson, Gonch, Ziggy, all them. Just Say No, kids. Sometimes on Fridays though you got those strange ones from the 70s, or dubbed German shows like The Legend of Tim Tyler (Tim Thaler in the original). Those were great, I used to crack up at the misplaced dubbing. I did see it in the original when I was in Austria aged 15 and it seemed so much more serious. 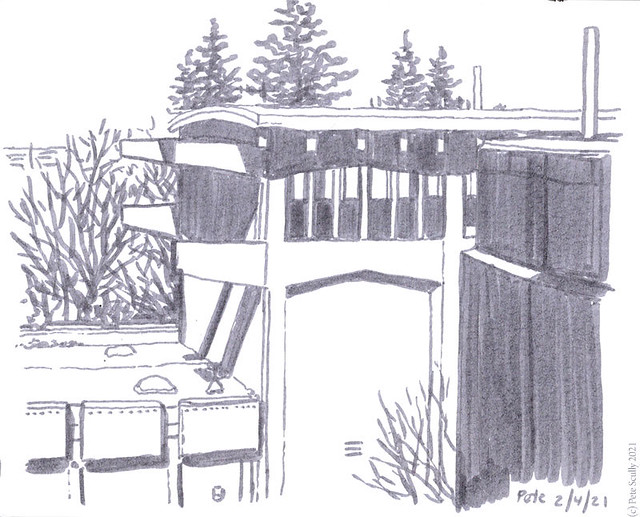 This one was drawn from my office, and it was just simple blue sky outside, no cloud at all. Bit cold though, and windy. I had an hour between Zoom meetings so I ate lunch at my desk, the Spurs v Chelsea game was on my iPad beside me (that was… excruciating), and I had a grey marker from one of the urban sketching symposia that I had not used before, so I did a quick drawing of the view with it. I am still working from home, same as the rest of the family, but on the day or two I need to come by to campus to take care of some things (often stuff like putting up required notices that hardly anyone will read), I like being back. Also, I don’t have cats bugging me all day. Can’t wait for us all to be back, but it looks like we won’t have that until the Fall. In the meantime I will continue to run, draw, work, meet via Zoom, listen endlessly to Belle and Sebastian (yet another B&S lyric for the blog post title; I have a lot of history and biography in this building now), watch bad Spurs games, not see people, and think about all the places I want to go after the pandemic is done with. In other words, the same as I was doing before the pandemic.