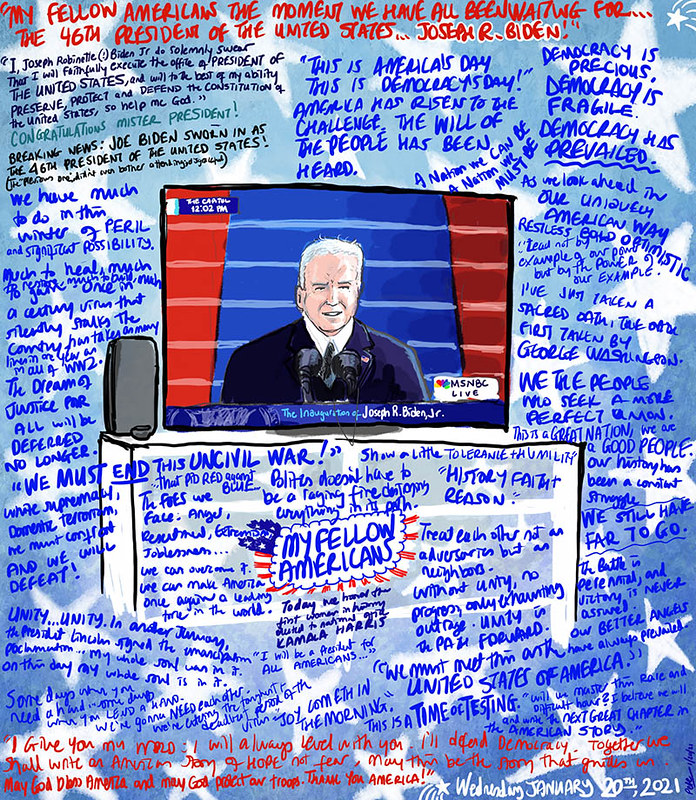 On the day of the Inauguration of the new President of the United States, Joe Biden, I watched and made notes on the iPad. I kinda don’t know where to stop when note-taking a speech as it’s going on, I feel like I have to inscribe every word, but you don’t know before going in what the most important bits will be. For example, I might write down a bit about coat-hangers or something, and then forget to write down the bit about a groundbreaking theory on dark matter or something. Not the topics of this speech but on a historic day you don’t want to be the person at FDR’s inauguration that wrote down the bits about locusts and profits but left out “The only thing we have to fear is Fear Itself”. So I just wrote words as they happened. I didn’t sketch during the incredible inaugural poem by Amanda Gorman, “The Hill We Climb”, I was just enthralled by that, it was a beautiful moment. I will probably sketch Ms Gorman’s performance some other time, I’ve rewatched it a few times already. I really enjoyed Kamala Harris’s speech too. But Biden’s inauguration gave me a great deal of happiness. I just wish I hadn’t drawn him looking more like Robert Kilroy-Silk. He totally does! In my drawing anyway, the real Joe looks nothing like Kilroy. Oh, Kilroy. Remember him? Americans won’t, he used to be on TV in the 90s, in the mornings, he had a kind of Jerry Springer-lite show called “Kilroy”. I remember actually watching it each morning on TV in the common room in the place where I lived in Belgium while eating a tuna panini for breakfast, so I always get the memory of the taste of tuna whenever I think of Kilroy. In fact it wasn’t like Jerry Springer at all thinking back; it was one of those daytime chat shows that was on at around 9:30 or 10am, right after BBC Breakfast Time or whatever was over, but the audience group was all sat facing the camera and there would be a topic they would talk about, I don’t know, whatever middle-England busybodies would talk about, holes in the road or immigrants or something, and Kilroy would bound about from person to person with his mike and his perma-tanned face and his kilroy-silky voice, and then he would tell you all to “take care of yourselves…and each other” in a totally non-creepy way, before his got show cancelled after he wrote controversial things about Arabs, then he was an early UKIPer, bounding about being all anti-EU, and I don’t think I ever thought of Kilroy once since leaving Britain in 2005 until now, when I accidentally drew him accepting the Presidency of the United States. The last thing we’d need is a perma-tanned TV personality with a history of having a go at muslims and banging on about immigrants in charge of things, eh kids. In fact I had to check my notes to make sure I didn’t mis-hear Biden saying “Take care of yourselves…and each other”; thankfully he didn’t. But anyway, welcome President Joe! And I had no idea his middle name was ‘Robinette’, you learn something new every day.