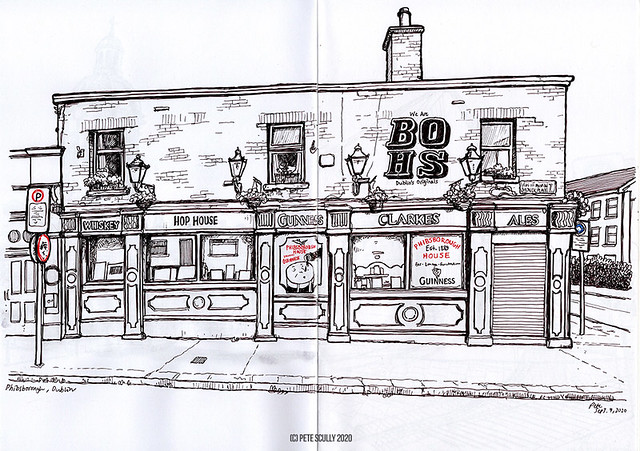 The final chapter in my recent (August and September…recent enough) virtual tour of Dublin, a series of drawings made on long and painstaking virtual walks around the city via Google Street View, reliant on the often unusual angles and above-head-height horizon lines, hoping traffic does not impede the view of something good. Thankfully I found some good views of several pubs, and in Dublin you are never very far from a good pub. I wish I could have gone inside, had a beer, sketched the interior, but I just had to imagine instead. This pub above is in Phibsborough, Clarke’s, aka the Phibsborough House. My next door neighbour Gregory here in Davis used to live opposite this pub, he said his cousin still frequents there. The large ‘BOHS’ sign above is a reference to the local football team (soccer that is, not Gaelic football, which is huge in Ireland) in Phibsborough, Bohemians. I have a Bohs shirt myself (courtesy of my neighbour, cheers) and the club’s supporters have a reputation for being very anti-fascist, pro-left issues, one of their recent kits had “Refugees Welcome” across the sponsor area. My kind of club. I did stay at a B&B in Phibsborough near the stadium on a visit back in the 90s. I liked this area a lot (I think one of my cousins lived there when I visited as a kid too) and would walk into downtown Dublin from Phibsborough every day. We never went to this pub, but my friend Simon who moved to Dublin in the summer has been here, and hopefully when all is Back To Normal and I can travel again, I’ll go there with him (and maybe say hi to Gregory’s cousin). 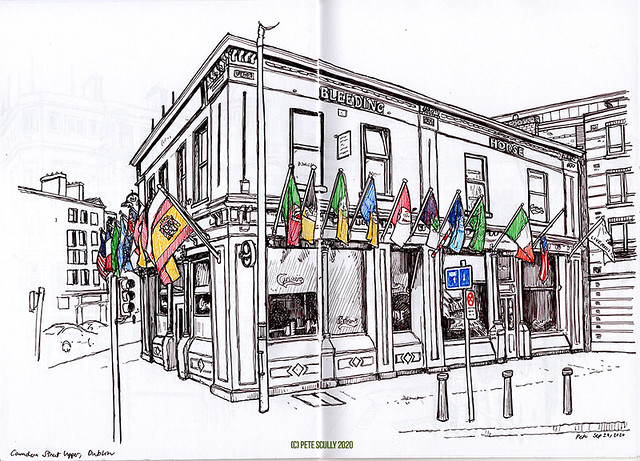 Walking on, this is south of the Liffey, down on Camden Street Upper. It’s called the Bleeding Horse and goes back to the 17th century. I don’t know how the pub got its name but it might be from an incident in the Battle of Rathmines in 1649, when apparently a horse that was wounded fled the battle. and YES, he WENT INTO THE PUB, and OH YES, the barman, the first ever barman to utter these immortal words, said to the horse, “WHY THE LONG FACE?” Oh yes he did. Although in this case he probably said “Why the long bleedin’ face?” Anyway this pub is just around the corner from the crosswalk outside the chicken farm, and the polygonal shaped parrot cemetery. The pub was mentioned in Ulysses, although I don’t remember that as I haven’t watched that cartoon since the 1980s, but I still remember the theme tune. The Bleeding Horse is a great pub name, but really is best said in a London accent, “the bleedin’awse”. Another one on my list of places to go on this future Dublin trip. I imagine this trip being one where I hope it rains a lot so I can spend more time inside the pubs drawing. It won traditional pub of the year in 2017 and 2018. 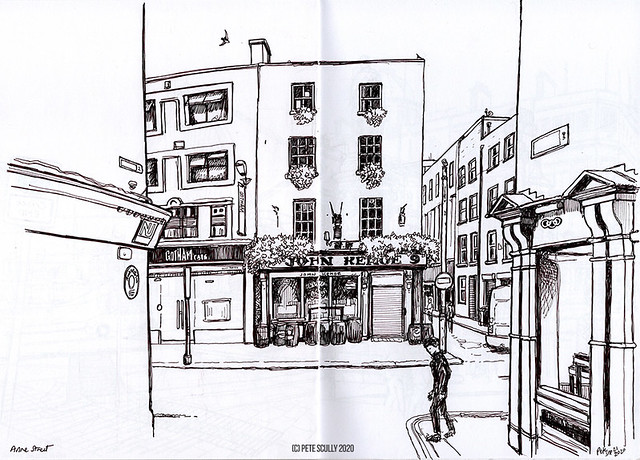 Next up, this one is on Anne Street in central Dublin not far from St. Stephen’s Green, called John Kehoe’s, which is described on its website as “an award winning traditional Irish pub in the heart of Dublin’s south city centre”. Sure it looks like a place I would spend an afternoon with my sketchbook and a couple of pints. I must confess though, I don’t like Guinness. Never been my thing. I’ll have a pint, but I’ll take a Smithwicks after that. Being where it is, I expect this place gets a lot more tourists looking for the authentic heritage pub than the others in this post, but as a Londoner who never minded tourists I don’t mind that at all, people on their travels and stopping for a pint or two are always up for a friendly chat. I’m usually a tourist myself. So this is another one added to the list, though I’d need to make sure I get there when I can find a good spot to draw the bar area. However I know for a fact that I would constantly be making jokes about the classic TV show “Through the Keyhole” because the name sounds a bit like keyhole. If here with my now-Dublin-inhabiting friend Simon, we would undoubtedly be going from Loyd Grossman’s distinctive New England twang “WHO LIVES in a HOUSE like THIS? DAVID it’s OVER to YOU” followed by David Frost, “Lets see…whose house…this is.” And of course it would turn out to be Michael Caine’s house, of course, so we’d have to do a Michael Caine voice, “Oi, get OUT of my HOUSE”, and I’ve only had one pint at this point. If you are thinking, no you wouldn’t, you’d think all of this but not say it, you are wrong. My now-Dublin-inhabiting friend Simon and I spent an entire evening in McSorley’s in New York City one sub-freezing February night doing a variety of voices, and when I say ‘variety’ I mean 95% Michael Caine, saying a variety of Star Wars quotes, and when I say ‘variety’ I mean almost every line in all of the movies. Even Jar-Jar. The poor couples sat next to us trying to enjoy a Valentine’s Day drink. But just imagine Michael Caine saying Han Solo’s line “Don’t get cocky!” I want to do a remake of Star Wars where all of the voices are replaced with Michael Caine saying the lines. “Mesa day … starten … pretty okey day … with A BRISKY MORNIN MUNCHIN!” Ok I can see you’re not impressed, let’s move to another pub. 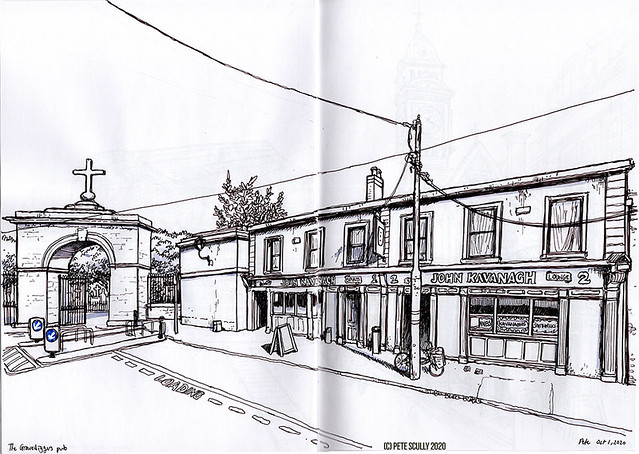 Slightly quieter spot now, north of the river, we might keep the Michael Caine impressions to a minimum at this one. John Kavanagh’s, next to Glasnevin Cemetery, is called the “Gravediggers’ Pub”. Right, so this one has a bit of history, and is even mentioned in Atlas Obscura, that book that talks about loads of interesting and obscure places in the world. The cemetery was apparently the first one to be opened up to Irish citizens of all faiths, Protestant and Catholic, in 1833. Anyway, Kavanagh’s is called the gravediggers’ pub because, well this is where they came after digging the graves. The story is that there used to be a hole in the wall that the barman would pass drinks through to the graveyard shift workers on the other side. A ‘stiff drink’ indeed. Here’s one: a gravedigger walked into a pub, asked the barman for a Guinness and a hot Lemsip. “Why d’you want the Lemsip?” the barman asked predictably. “For me coffin,” replied the gravedigger, also predictably. Thing is, the gravedigger has been a staple of comic humour for centuries, just think of the gravediggers scene in Hamlet, the funniest part of the very long play. Especially in the Kenneth Branagh version where Yorrick’s skull is very obviously Ken Dodd, even before it’s revealed to be he. And that always reminds me of the tongue twister, “Ken Dodd’s Dad’s Dog’s Dead”. Try saying that after a few pints at the Gravediggers’. 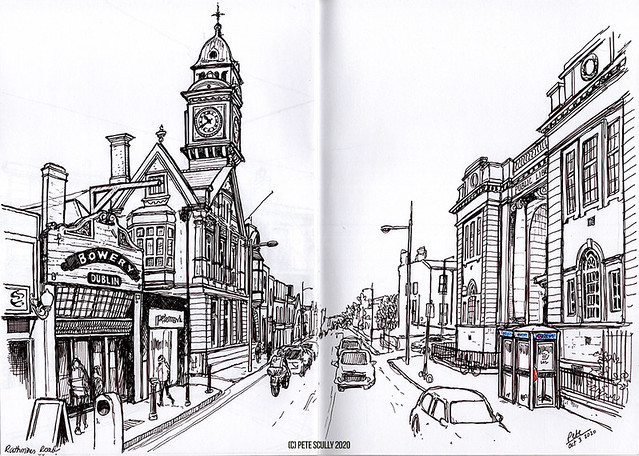 And finally, not a pub this time but the view from the middle of Rathmines Road, south of the centre of Dublin. This is the end of the book. There is a pub on the left called the Bowery, which seems to be built in the style of an old galleon, so very much somewhere I’d like to go. Except that I think it may have since closed, maybe eve pre-pandemic. Even before this past year, so many good pubs were closing down, and I really hope that they all can somehow survive this pandemic mess. I miss sketching in pubs, I miss the very idea of pubs, places of life, social history, and Michael Caine impressions. That clock tower kept making me think of the old song “Quare Things in Dublin” by the Wolfe Tones, there’s a clocktower in that song, and a pub of course. Rathmines I guess is an area of Dublin I’ve never been to but a lot of my great-grandparents and beyond lived around this neck of the woods, Harold’s Cross, Ranelagh, Portobello over the canal. Plenty of Higginses. The Scullys were from more north of the Liffey. These days I know what Dublin family I have is all over the place, I only met a few of them in my life when I was a kid, as well as many of the Higgins lot who’d gone down to Wicklow a long time before (I remember walking into my great-uncle Bernard’s house and it was like the hall of mirrors, so many red-headed Higgins who looked like me – this is where they were all hiding! None of my siblings or parents have red hair). It’s not like I’d be going on a family discovery tour if I went back to Dublin though, we’re not really like that; I remember when my nan died, end of 1988, when I was a kid in Burnt Oak, London, and her brother came to the funeral. I never knew about this brother before so that was a surprise great-uncle, I assumed he had come over from Dublin. No, he also lived in Burnt Oak, in the street next to my old school, but this was the first I’d ever heard of him. So I just assume that I’m probably related to loads of people I’ve never heard of, they just don’t necessarily all talk about each other. In fact I never even knew the names of my great grandparents until recently when my sister did some digging. Lots of people with the same names going back generations, it turns out, and mostly Dublin for at least a couple of centuries. Lots and lots of people called James Higgins, one (great-great grandfather) with an exceptional General Melchett moustache. One other thing we did discover, my grandfather William Scully, who died before I was born but who gave me my middle name William, well I found out his middle name was Edward, which completely coincidentally is my son’s middle name (which in this case was named after my older brother’s middle name, and he isn’t a Scully). I think my great-grandfather may have been Edward William Scully too. We like to re-use names.

So that was a brief jaunt around Dublin, in no order, on paper I probably would not choose to draw on again. I sent the finished book to my now-Dublin-inhabiting friend Simon (he actually got me the blank book in Dublin in the first place) and I hope he can explore all the historic story-filled pubs, once this bleedin’ pandemic is done with. My next virtual tour I have started already, a long tour of France, starting at Calais and finishing up in Paris, while circling around the country, 64 stops, much more detail. It’ll take a while, but I’m not going anywhere.