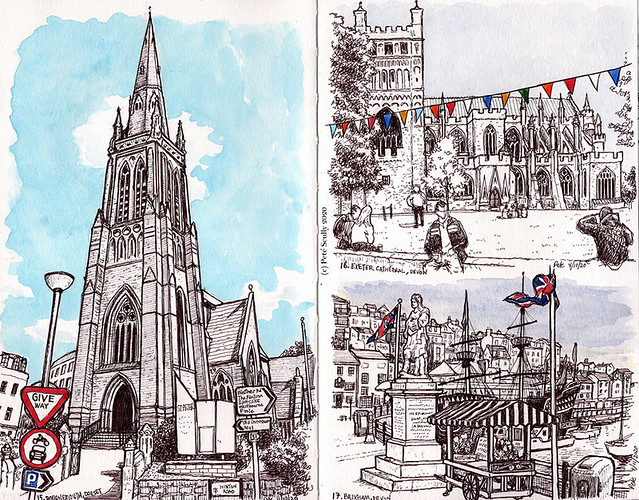 And just like that, we are in Dorset. Virtual tours go quickly. Hampshire might be a big county with a lot going on but there’s a lot to see. Bournemouth is the next stop, but I’m avoiding the beach because there are crowds of people, so I walked virtually inland to see if there was anything else to draw other than the pier. Time for the first church of the book, and this one is very tall, the 1879 church of St. Peter. Good name that. I have never been to Bournemouth but I know people that live there. My mum actually went there last week for the first time. It’s a popular seaside resort town, looks like a nice place for a weekend away, but I’d probably prefer somewhere a little less popular. The local football team, Bournemouth, got relegated from the Premier League this season after a few seasons, and I still can’t quite believe that Bournemouth were in the Premier League. I hope they come back some time.

Right that’s Bournemouth and Dorset done with, time to move along the coast. This is where I really start editing out the stopping points. I’d like to visit Poole, and Portland Bill, and I hear Weymouth is nice, and of course the Cerne Abbas giant in the hills further inland. I need to get to Devon though, one of my favourite counties. when I passed through Exeter last year I never left the train station, though I did sketch the platform. IF I’d had time I would have visited the cathedral, so I went there virtually on this trip instead. I couldn’t get a great view, and I’d dug myself into a bit of a corner for space on the page, so I just drew what I could. Little dash of colour from the bunting. Exeter goes back to Roman times, though their football team Exeter City’s nickname is the “Grecians”. It’s not clear why, some say it might be because of their location outside the city walls in St.Sidwell a century or so ago gave people the idea that they were the Greeks (or Grecians) outside the walls of Troy, honestly the things people think up. Dundee United’s fans for example call themselves the ‘Arabs’ because years ago they had lots of sand on their pitch, true story. Their other nickname “Tangerines” makes more sense given their orange shirts. Portsmouth are “Pompey”, a nickname for the town which could come from a number of origins but one I like is that Charles II’s wife Catherine of Braganza thought Porstmouth reminded her her Bombay, and mispronounced it. Bournemouth are the cherries, makes sense because of their historically red shirts (also apparently fruit orchards nearby their ground when the club was founded). But Exeter are the Grecians, but I’m not sure what they’ve done to urn it.

Always with the puns. I could write a book about football club nicknames but I don’t want to. My brother and I used to quiz each other on them years ago, the Shakers and the Quakers, the Addicks and the Latics, the Eagles and the Seagulls. But time is pressing and I have to move along. I couldn’t find anywhere I wanted to draw in Torquay or any of the surrounding towns, until I found Brixham with its pretty little harbour. Again though, it got a bit squashed into that corner. Pages like this made me rethink the spread layouts a bit, and the next few will evolve a bit more until I start getting much more out of the space. Brixham is on the southern end of Torbay, and apparently this is where the Dutch William of Orange landed with a big Dutch army on his way to taking the crown in the “Glorious Revolution” of 1688. That would be William the “No no no, I’m not a conqueror! I was totally invited here! And my wife Mary is the current-but-soon-to-be-former King’s daughter. All good? Throne please!”. King Billy, they call him in Northern Ireland. Yeah, that’s a story for another place, let’s leave William behind and move along. Brixham apparently has a big Pirate festival every year, which sounds like something I’d want to go to. This is getting into Pirate country down here in the SouthWest, especially once we hit Cornwall, in the next post. Bit more Devon to come yet though (I do like my cream tea and Devon fudge).