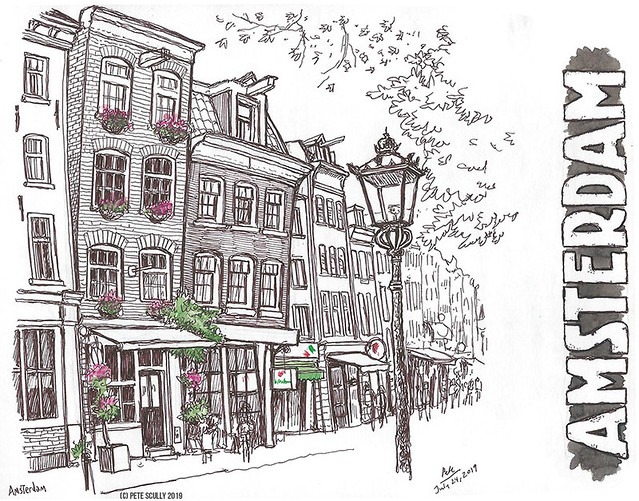 And so, on to Amsterdam. Due to the heat-related travel chaos I arrived later than I’d hoped (but still, I was lucky to make it), and so I missed the opening ceremony of the 10th Urban Sketching Symposium. This annual event started in Portland in 2010, and I’ve gone to many of them since. Boy how they’ve grown. I arrived in Amsterdam, waded through the crowds at Centraal (I’ve never been a fan of that station, and it’s just how I remember it), and checked in to my hotel, a spectacular historic building called the Scheepvaarthuis, now the Grand Amrâth Hotel. This might have been my favourite thing about Amsterdam, and in fact many other sketchers would come to draw the building. I didn’t stop too long though as I wanted to go and meet up with the other sketchers that I know. There were a LOT of sketchers milling around. I found many of my old Urban Sketchers pals who I met at the first symposium, and some went off to eat while I went off to sketch with Matt Brehm and Lapin, because you have to draw before you can eat. We drew the scene above. It was my first time in Amsterdam in 20 years, and I remember it as somewhere I always wanted to go back and sketch, but was not a fan of the crowds. These crooked buildings are just the thing to get me started though, and I like those girders that stick out at the top which are used as a pulley to bring things up to the higher floors of those narrow houses. After this, the three of us headed down to Amstelhoeck, which was where many urban sketchers would be gathering each night for a drink and draw, and we had much merriment, always nice to hang out with those lads. I’ll add in my people sketching in a later post. 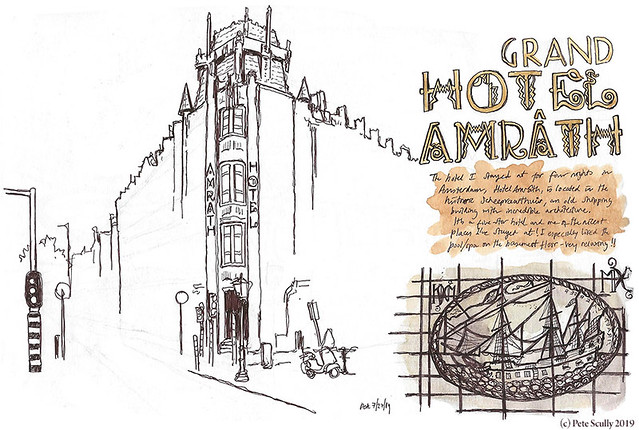 So here is my hotel, the Grand Amrâth. I spent a lot of time online looking for the right hotel. Everything was pricey, and I knew that I could stay further out and save some money, because the public transport is so good in Amsterdam and well connected, and I could even ride a bike around (spoiler alert, I never ended up riding a bike in Amsterdam, despite being a cyclist in America’s self-styled ‘biking capital’ Davis, I wasn’t brave enough!). But I also wanted to be in short walking distance from the symposium, without having to pass through too many crowds. I wanted somewhere with character rather somewhere bland and corporate, or meagre and depressing. Having stayed at an ok place in Porto which ended up being up a really steep hill and was modern having little character, I wanted to choose a bit more wisely this time. I found a decently priced room at this place, the Grand Amrâth, about the same price as many of the other dingier looking places, and chose it because the building looked like a haunted castle. In fact some of the reviews said it actually was haunted. So when I showed up and saw that it was in fact a five star hotel I was surprised. The place is an architectural wonder. The Scheepvaarthuis (“Shipping House”) was built in the early part of the twentieth century, and was the ornate headquarters of several shipping comanies. Architecturally speaking it is perhaps the finest example of the ‘Amsterdam School’ (and I say this knowing full well I don’t know any other examples). I enjoyed the elaborate stained glass windows, as well as the decorative ironwork, but also the entertaining moustachioed statues, one of which looked a bit like my sketching friend Arnaud de Meyer (he pointed it out, that it was the most accurate drawing I have done of him). Have a butcher’s at all of this though. I would definitely stay here again, if only for the sketching opportunities. 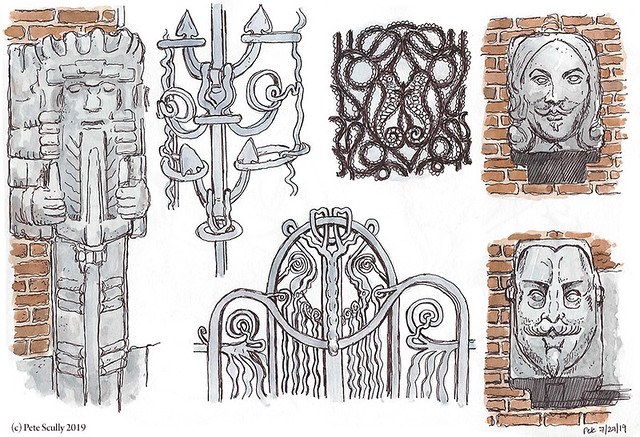 Other sketchers came out to sketch here too at various points, such as Lapin, Arnaud de Meyer, Martine Kervagoret and of course Gerard Michel (click on the links to see their sketches of the building). Plus many more. However I am really glad that I stayed here during the heatwave. My room (which was very nice, and always well-stocked with a free mini-bar, always lots of nice cold water and Diet Coke to come back to every night) had good air-conditioning, unlike a lot of the hotel rooms in the city. From stories other sketchers and tourists were telling me, apparently a lot of them were breaking down, meaning it was very difficult for people to sleep in their intensely hot rooms, to the point that people were sleeping in the cooler hallways. Thankfully I did not experience that here. There was also a nice indoor pool in the basement that I definitely took advantage of when the intense heat got too much for me (and boy did it, it melted my mind). I never ate at the restaurant, but I did eat an ‘Uitsmijter’ (a Dutch dish, three fried eggs with cheese on thick bread) at the small bar, also having a nice cocktail there. Look at the building at night, below, one side facing a quiet canal shrouded in total darkness. It’s one of the most spectacular places I’ve ever stayed in. I was looking for character, I found a whole Pirandelli. I would come back to Amsterdam just to stay here.

As I say, it was very hot. Below is an unrelated picture of a mn pressing a button at a crosswalk, which is a diagram you see on the pole, showing you how to press the button in case the ehat has melted your mind so you might forget. Next to that, a photo of a Mango flavoured Fanta. Mango Fanta is delicious. They do a whole spectrum of flavours of Fanta in the Netherlands (though what I drank most were the delicious fresh juices you get everywhere, so good), but the fancy flavors are expensive. I think this can was like 3.50 Euros, just for a can of soda. When the man in the shop opposite the hotel told me the price, my eyes popped out and I was like, no way dude, that’s a lot for a can of drink. I’m thinking, tourist shop, silly prices. So I went next door, where the price was exactly the same, and so I thought oh well, that’s what it costs, I’m thirsty. But as I walked past the other shop I hid my drink, the walk of shame. It was worth it though, best Fanta ever. 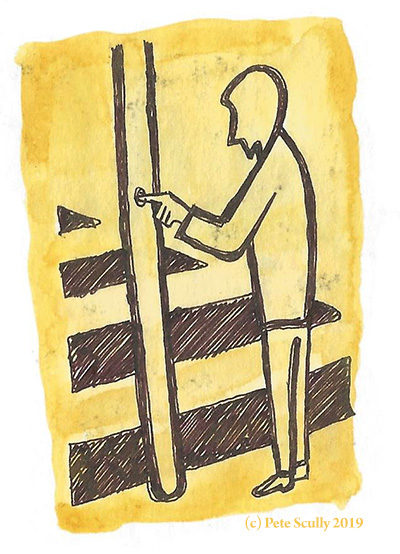 As always when I recount my stories from the sketching symposium it might take a few posts, but I’ll try to mix them up a bit. I sketched a lot in Amsterdam, but because of the heat destroying me I always felt like I could not sketch enough. The symposia always feel like a big competition to draw the most, when that’s never really the point of them, it’s about spending time with other sketching friends, learning from each other, seeing and experiencing the world. Matt Brehm said on this trip, “It’s ok not to draw.” All that said, I really did draw a lot…

2 thoughts on “Arrival in Amsterdam”