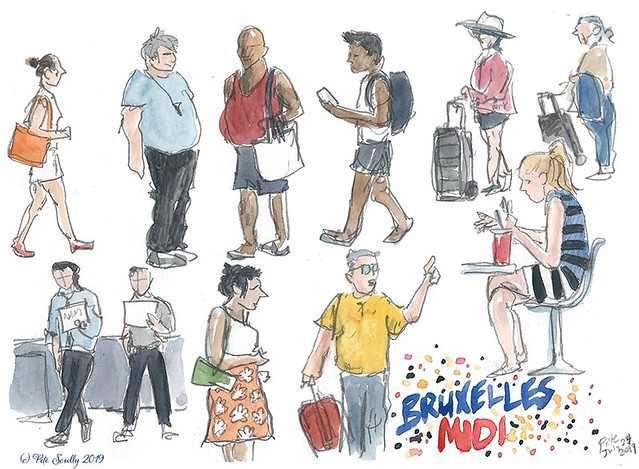 I got to Brussels Midi station early, I wanted to make sure I got my Thalys (the high speed train that runs between France, Belgium and the Netherlands) in good time, with a bit of extra time to wait in line at the infamously slow ‘Quick’ restaurant. It was still so hot, and as I sketched I heard of trains getting delayed. I had been telling people that I am ‘travel lucky’ – it always seems to work out for me, somehow. Well today my travel luck might be running out. The heatwave cancelled trains all over this part of Europe, especially in northern France, from where my Thalys was arriving. The Eurostar too was being cancelled, as well as many flights – several people I know coming from the UK were not able to make it to the Urban Sketching Symposium. 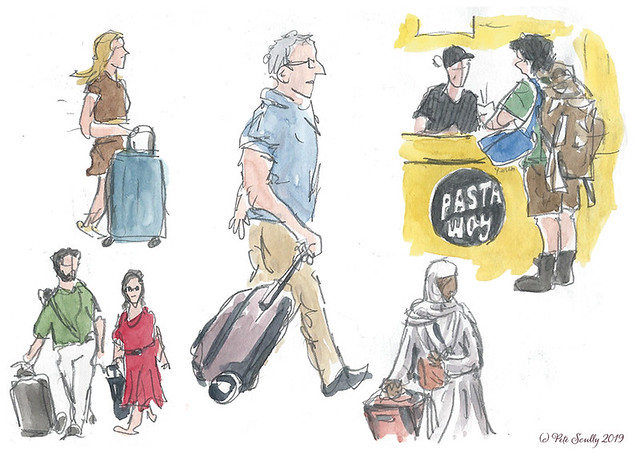 It was travel chaos, and there were many hundreds of confused or angry people lining the platforms, but not at the time when I made this sketch. In fact the sole woman on the platform at this time, she spoke to me a little while later and she too was going to the Symposium from France, in fact she ended up being in my first workshop. But this was before all the delays had really kicked in. After many hours being stuck in the station not sure of what to do, the train was officially cancelled, as were many others, so I tried to find a route to Amsterdam by slower means. I have never enjoyed being stuck at Brussels Midi (or ‘Zuid’ as the Flemish call it) but well, what can you do. 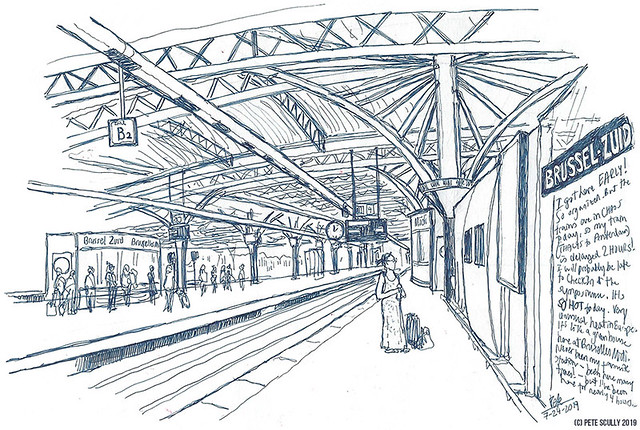 Eventually I was in line to get a ticket for a slow train, and right at the moment my number was called I noticed on the screen that my Thalys, by some miracle, was not cancelled but on the platform. I dashed upstairs and got on board, not believing my luck, and while the journey was slow, I sketched and had some free beer provided by the train staff. So in the end I was travel lucky. Off to the Symposium! Where the weather would get even hotter and more unbearable… 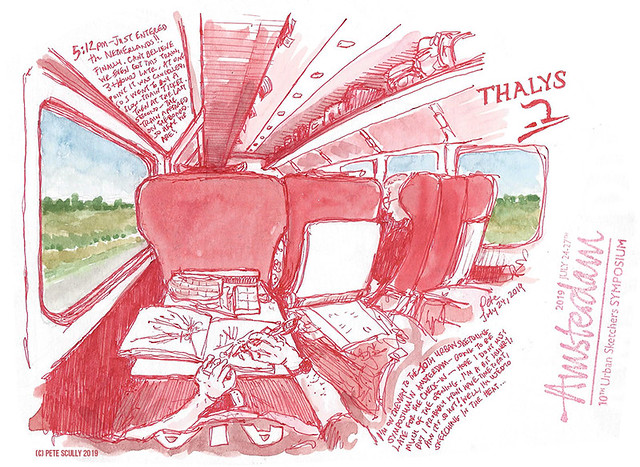 It was so hot that my Big Nuts melted. Big Nuts is one of my favourite Belgian chocolate bars and when I bought one, I did know it would probably melt but I bought it for the silly punchline. I still ate it though (well, drank it).

Here was the weather at the time. (By comparison Davis was up in the 108s, but we don’t notice it as much in Davis because we have good air conditioning and dry heat, in the low countries of Europe these temperatures are totally unbearable)

One thought on “a day hanging around brussels midi”