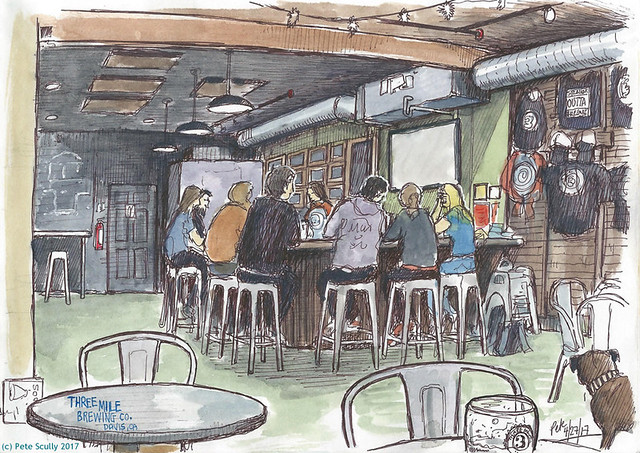 This is Three Mile Brewing in Davis. Everywhere is a brewery these days. This place is fairly new, and brews right here, in the courtyard of Cedar Court behind 3rd and G Streets. I came here one other time and had a ‘Frankenweizen’ which I quite liked. This time I had an Irish stout which was less my thing, followed by a Kolsch, which was nicer. I enjoyed drawing here, having come here one evening after working late (March and April this year had a lot of those long work days!). They have a lot of t-shirts and merchandise which of course all the breweries do these days. The name ‘Three Mile Brewing’ actually comes from an old Davis law, though, that was established in the early 20th century after much lobbying by the Women’s Christian Temperance Union that alcohol could not be sold within three miles of campus. This ban went until 1979 you know. Even since I’ve lived in Davis the number of bars has grown by a lot. I should know, I have drawn them all. I enjoyed sketching at the table here, listening to people talk the evening away, and there was a dog that was very contentedly sit next to his family a table away from me. Some of the bars in Davis are quite dog-friendly, with the University of Beer for example having “Puppy Hour” on weekends, most of the day rather than just an hour, where you can get a buck off your beer if you bring your dog. Woof! I don’t have a dog so I pay full price. What if I brought someone dressed up as a dog? What about werewolves? Where do I go from here after talking about werewolves? Let’s get back to the sketch. It took two beers (the aforementioned Stout and Kolsch) to draw including all the colour, and it was another practice test in perspective observation. Knackered, I finished up and went home to my bed, to get up early again next day.