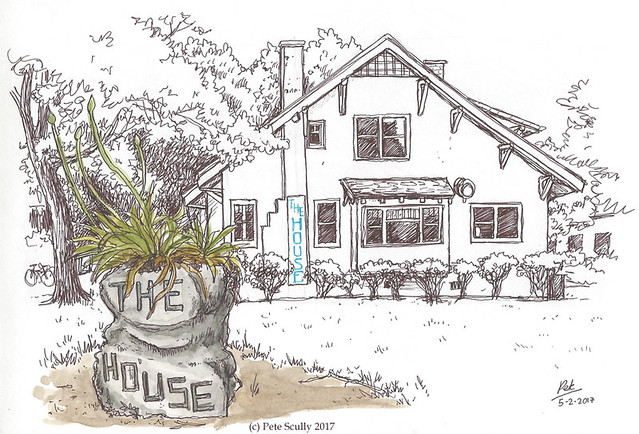 Yeah, another posting break. I can assure you that I have been sketching a lot though – a LOT. Almost as if I needed stress relief from the world at large. 2017 really is making 2016 look like a golden age, as predicted. So I am about a month behind posting my sketches, and this one is of ‘The House’, a building on the UC Davis campus. I really wish The House was located on A Street. It is a good name though, because it is exactly what it says it is. It’s a bit like The Barn, another campus building. I for example work in The Mathematical Sciences Building, which to be fair is equally as descriptive. And A Street is, I must concede, A Street. Have you missed this? The inner workings of my thought process made into pixellated reality to justify the space beneath the drawing, as if the larger the paragraph the more justified the illustration (this paragraph is totally not justified though, it is left aligned). This year has flown by, and at the same time felt so long. There is still a lot of it left. Tomorrow is the British snap general election (actually it is today now) (I’m up late writing from California), because we weren’t already drained enough. It feels so much worse than even a decade ago. I remember drawing a political cartoon for the 2005 general election that actually got shown on the Channel 4 website, with the leaders of the Three Main Parties as the Three Bears, with Goldilocks running away from them, it seemed funny and innocent at the time.  These days I’d draw it as something like the Brothers Grimm’s ‘Death of the Little Hen’ or something equally, well, grim. I ain’t going all politics here though, I honestly cannot be bothered right now. So, this is The House. Actually I really wish it could have been located on R Street, maybe in the middle. I’d write a song about it.

5 thoughts on “the house”