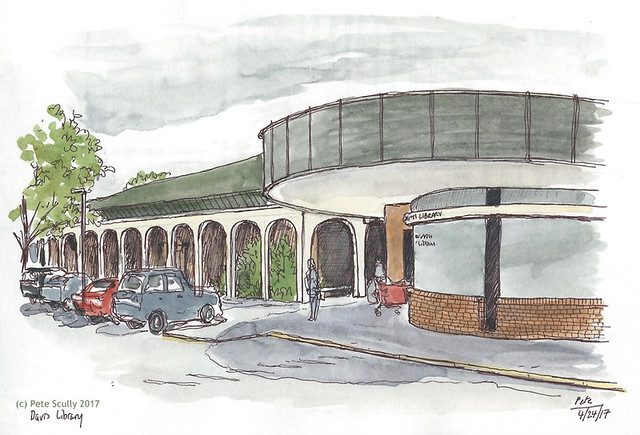 This is the Mary Stephens Library in Davis, our local public library. I like it here, and am super thankful for the fact that public libraries exist. I spent so many years in the library, looking for the exit. No when I was a kid I would go to Burnt Oak Library after school and read every book I could, mostly the ones about other countries, I always wanted to travel. I never thought I would end up in America; I do remember reading all about Australia, and Germany, and Hong Kong – there was this one book about Hong Kong I used to read over and over, and to this day I still have never been. Nor Australia. I used to read a book about Australia and learn all about exotic things such as Lamingtons, Flying Doctors, Funnel Web Spiders. I loved the library. Sometimes I would go to Hendon Library, a couple of stops away on the tube, but it was much bigger and had a music section. I would check out records there, they had a lot of old BBC Sound Effects records I used to enjoy for some reason, you know the ones with “Door Creaking” or “Thunderstorm”, I remember they would check the record for scratches before giving it to you, marking each imperfection with a yellow crayon, and don’t even think about bringing it back damaged. Hendon Library. I spent so many Saturdays in there, sat in the Languages section, they had a lot of books about Languages. That’s where I did most of my reading about Languages when I was a boy of 13 or 14, amazed that there were so many in the world, I tried to learn different alphabets and was especially enthralled with the Cyrillic alphabet, this being back in the days when the Cold War was about the end and it had such a distant and exotic feel, and I loved how different languages that used Cyrillic did it in their own different way, the special letters in Serbo-Croatian (the Serbian side anyway) that the Russians didn’t have, and then all the others across what was then the Soviet Union. I devoured those language books. History too, I would read whatever I could about anywhere, especially the remote far away places; I read one book about the history of the Falkland Islands once, cover to cover. I didn’t only read about Languages and Countries and History but also a lot of fiction, especially fantasy fiction, though my favourite books were always the Fighting Fantasy series of gamebooks, I still have my collection of them (except a couple which I lent to my nephew many years ago) but I would read many many more at the library. Sometimes I would go to Hendon Library on a Saturday after lunch and get a bunch of books at the library, and then get the bus from The Burroughs, the 183 to Harrow, reading book after book on the way, and then in Harrow I would go to the bookshop near the St.Ann’s shopping centre and read more books, mostly about Languages, before popping by the Games Workshop to buy some colourful dice, getting a bag of chips from the chippy, and getting the 114 back to Burnt Oak. Those really were the days. When I grew into adulthood I still spent ages in the Library, like Crouch End Library when I was jobless in Hornsey, or the Maughan Library when I was studying at King’s, and of course the massive Shields Library at UC Davis, the first place I ever came to spend my time when I first moved here, reading as many books about Old English as I could find on the shelves. Libraries were always my natural home, my quiet retreat, and they still are. I stand up for libraries. This one here in Davis is near my house, and I sketched it one afternoon before picking my son up from school, with grey clouds hanging in the sky. We went in afterwards, and spent some time with the books.

7 thoughts on “the library years”