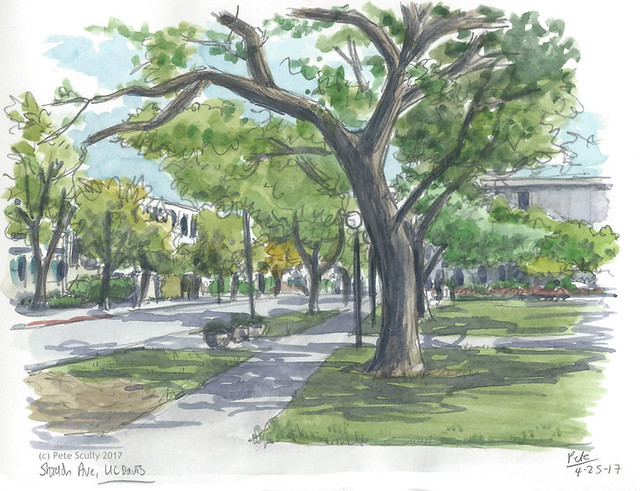 This was sketched in the middle of UC Davis (not the geographic middle because it doesn’t half stretch out west, “beyond the cows”, but I’m not counting that part of campus) that is to say, between Shields Library and Mrak Hall. It’s on Shields Avenue. That’s officially the UC Davis address, “One Shields Avenue”. I know, “1, Shields Avenue” probably makes more sense but more often than not we write “One Shields Avenue”. (Yes I know “Shields” is plural but only if you mean the thing, the shield) (For all you know “shields” is a verb in the third person) (Well this actually refers to a surname, Peter J Shields) (Look just leave it). Mail doesn’t even go there, it goes to Mail Division out in the far west of campus near the airport. Oh does UC Davis have its own airport? Well yes it does thank you very much. The address does remind me of “Number One, London”, the actual address of Apsley House, by Hyde Park Corner. Yes if you wrote a postcard to “Number 1, London” it would go there. That is the former house of the Duke of Wellington, he of Waterloo fame (the battle not the Eurovision-winning song) (Waterloo did reach Number 1 in the UK though, funny enough, but not in the US) (Hey, Abba were Number 1 in the UK when I was born but I’m not telling you the song) (Because I can’t remember) (Look just leave it). The Duke of Wellington, or Arthur Wellesley as he was known to his mum, was also called “The Iron Duke”. Ah, because he was a famously firm and strong-willed commander. Or perhaps because he kept a whole bunch of special arc-reactor-powered flight and combat suits in his basement. Well neither of those in fact. When he was Prime Minister he was not particularly popular and people often came to Number 1, London to throw things at his windows, so he put iron shutters on them to stop them from breaking, hence “Iron Duke”. I know, it doesn’t make any sense. Perhaps Iron Man should have done that when those helicopters came knocking on his window in Iron Man 3. Speaking of Marvel and of Shields, I’ve really been enjoying Agents of S.H.I.E.L.D. lately, that’s been quite a fun show, very comic-book. But anyway back to the sketch, this (as I said) is of Shields Avenue, and I actually sketched it in pencil rather than pen, then adding the paint as usual. This was late April, sketched in the latest Seawhite of Brighton sketchbook (#6 I believe, though I may embark on a complete sketchbook renumbering project, my sketchbook show last Fall has kind of prompted that).