There were many interesting and varied talks that you could attend at #uskmanchester2016. Yes, I just used a hashtag in a sentence. Now if were saying that out loud I wouldn’t say the word “hashtag” but then that is why the written medium is capable of things that the spoken medium just isn’t, and vice-versa, and then there is the drawn medium. One thing I like about sketching at talks and presentations is that you can use it not only to document the visual of the event, but also take notes on the text. There is the issue of course that you must be careful what you write down, as that then potentially defines the speaker’s points in possibly unintended ways – take a sentence out of context, written down in a hurry, and sure they did say that, but it may not be what their talk was about. So whenever I have drawn presenters, I have been aware of this and tried to write down the thoughts and phrases that seem most to encapsulate it, though it’s impossible to catch it all.

I only managed to attend one talk in Manchester, having been off sketching the streets all the other times, taking advantage of the non-rain, but I wasn’t going to miss this one, “The Art and Habit of Travel Sketching“, by my friend from Portland, Rita Sabler. I first met Rita at the first symposium in Portland, learning that she was a UC Davis alumna, and have followed her sketching work ever since. She has a really cool and vibrant style, with a lot of travelling under her belt as well. In this talk she showed us some of her amazing travel sketches and shared her experiences around the world, both the good and the sometimes scary. She offered tips and advice on travel sketching, and spoke in general about the act of keeping a sketchbook, and the unexpected interactions it can bring. I wrote down some of what she was saying – click on the image above to get a better view – and some of my favourite takeaways were:

I really enjoyed the talk, and everybody else that was there enjoyed it as well – and it was a full house. I was surprised that more people were not sketching though! I did spot a few others with sketchbooks out. Here was Rita afterwards, holding my book: 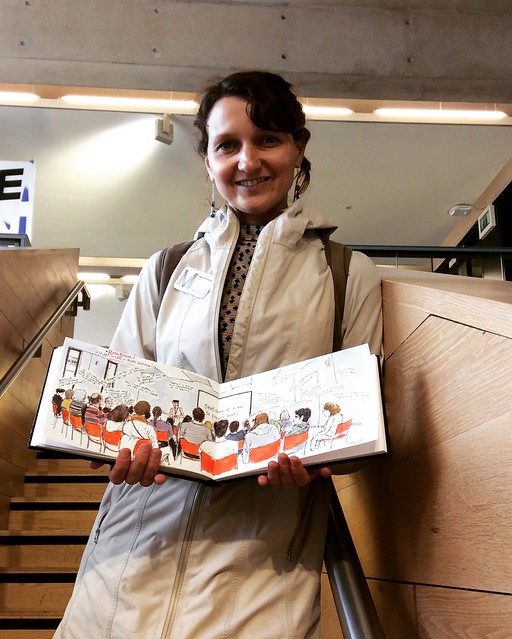 You can see more of Rita’s work on her website www.portlandsketcher.com, or on her Flickr page. You can also see three awesome chapters written by Rita in my book, Creative Sketching Workshop!