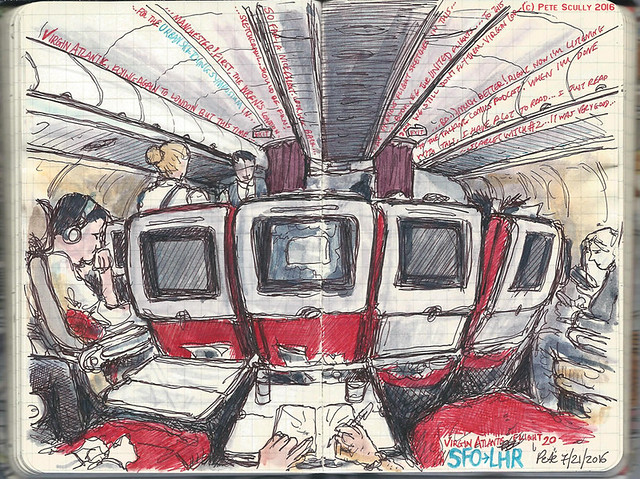 Transatlantic travel can leave you feeling cramped up for days. Well, it does now I am 40. I don’t remember it happening so much when I was 39, a few months ago. Ah well, a week of non-stop sketching and wandering both London and Manchester clutching sketchbook to my body in that peculiar way that I do probably added to the effect somewhat. I have not started all the scanning yet from the many sketches I did at the Urban Sketching Symposium in Manchester (July 27-30), as well as the Sketching Wren’s London sketchcrawl (July 24) and the Let’s Draw London sketchcrawl at Trafalgar Square (July 23). Here though are the sketches in transit, starting with the Virgin Atlantic flight to London from SFO. As usual I barely slept a wink, my knees being squashed against the seat in front. I love flying Virgin Atlantic, but their legroom in Economy truly sucks. 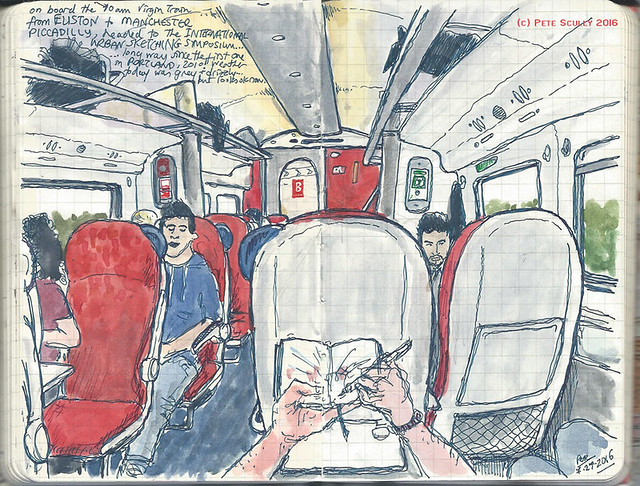 Virgin Trains on the other hand had pretty good legroom, and the train up to Manchester was a very pleasant journey. I sketched again in the “Lapin” Miquelrius notebook and listened to music from Mancunian bands while the countryside whizzed by.

On the train back from Manchester I sat by the window and sketched a much larger panorama; I had taken Paul Heaston’s workshop in Manchester and realized I do need to stretch that curving perspective a lot more. While I do love a bit of the old curvilinear as you know, I don’t stretch it quite so often as I might, and it’s a good game to play. 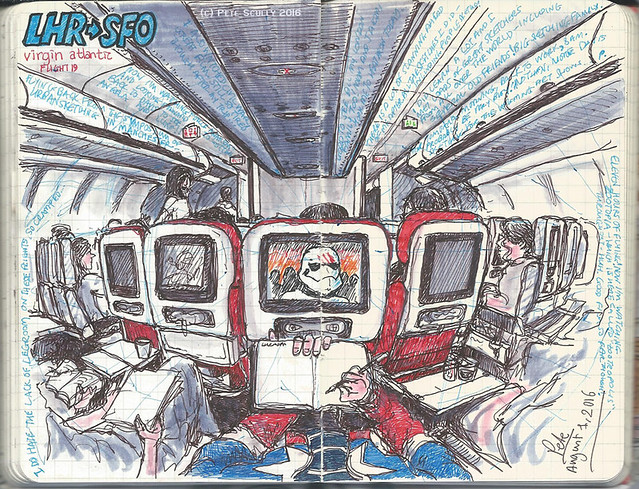 And in this last one, the squashed flight back to California. I watched Force Awakens as you can see, and Civil War (while wearing my Captain America hoodie). I also watched Zootopia, or rather, “Zootropolis” as it is called for some reason in the British release. Stay tuned for the sketches from England. There are a lot of them…