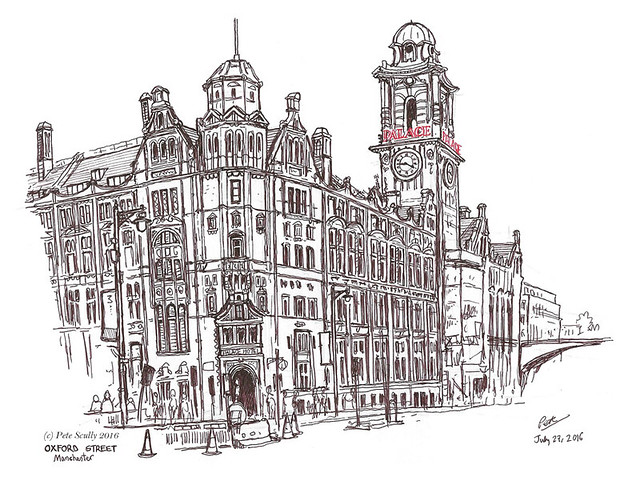 Two weeks ago, I attended the 7th Urban Sketching Symposium in Manchester, in the north of England. I went as a “Workshop Pass Holder”, which is the full access pass, though of course there are so many workshops and activities there is really only time to do a few, but I certainly packed a lot in. I had never been to Manchester before, and had no idea what to expect. It was pretty awesome actually, lots of sketchable buildings, lots of old pubs, and yes, it rained almost every day. Well you’re not doing Manchester properly if you don’t get rained on a bit.

When I first arrived, I checked into my apartment at the Atrium on Princess Street, did a bit of shopping at Sainsburys Local,and then sketched the magnificent Palace Hotel, above. I had intended on colouring it in but when I was finally done, I preferred it like this. Also, I needed to go and check in at the Symposium venue, the Manchester School of Art. I enjoyed sketching this; I stood beside a group of Jehovah’s Witnesses and I chatted to one of them, a nice chap who told me about his passion for photography, but that he hadn’t done any drawing in quite a while. I told him that Manchester was about to be flooded with hundreds of people out drawing the streets, sketchers from all over the world. As yet I had not seen a single one, but as I thought about that, I bumped into Vincent Desplanche, a prolific French sketcher who I met last year in Strasbourg. I stood with him and sketched the Oxford Road station and this curving picture house on the corner of the street. I was moved by the words on the sign which read, “Thanks for 30 years…see you at home.” To see old cinemas closing down like this, beloved old buildings falling into disuse by the swift steely march of modern times, and with that big crane in the background, and the touching, sad sentiment of “see you at home” obviously being some reference to the fact people don’t go and watch films any more, they stream them all nowadays, sitting on their armchairs and microwaving popcorn, where is the community, where is the shared cultural experience, oh then someone pointed out to me that “home” meant “HOME”, not “home”. “HOME” is a big new arts, theatre and film complex just down the street, and I guess the cinema was just moving there. Well. Now I know. So much for my poignant image, people streaming by on their way “home”. 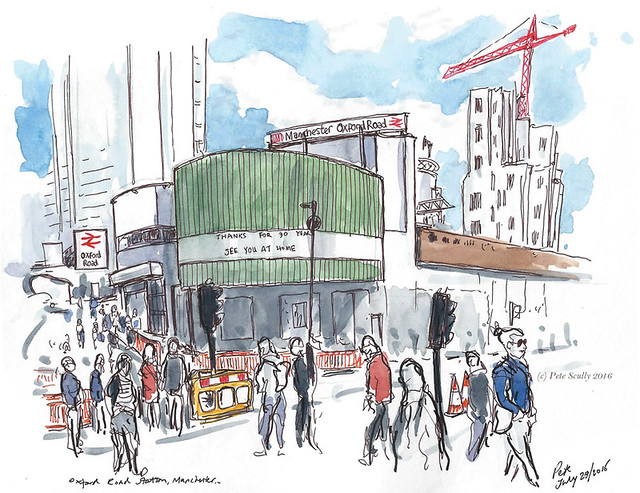 Here is a map I added to my sketchbook. I will be documenting my time at the Symposium in a less ‘chronological’ and more ‘themed’ type of way, with a post for each of the workshops I attended, including what I learnt and a bit about the instructor, as well as the social gatherings, sketches of pubs, and other miscellany. I will probably post these all over the next week or so, but will also be posting current sketches as well. Oh, and the football season is about to begin so expect some new football kit posts too. I’ll also do a couple of posts about the exciting upcoming projects coming from me this Fall. I will also ramble on about some nonsense you don’t care about, make a few terrible puns, and explain why proper north-of-England chips in gravy is the best food ever. 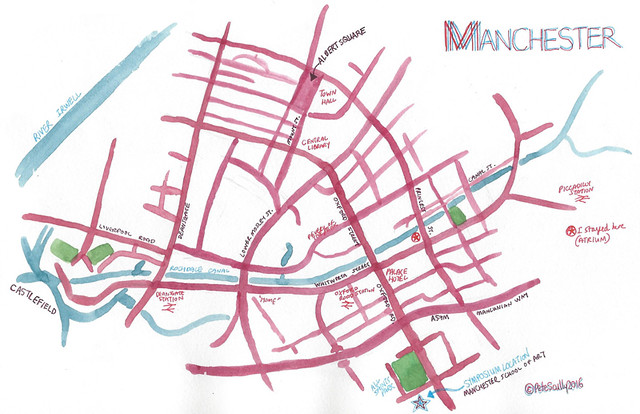