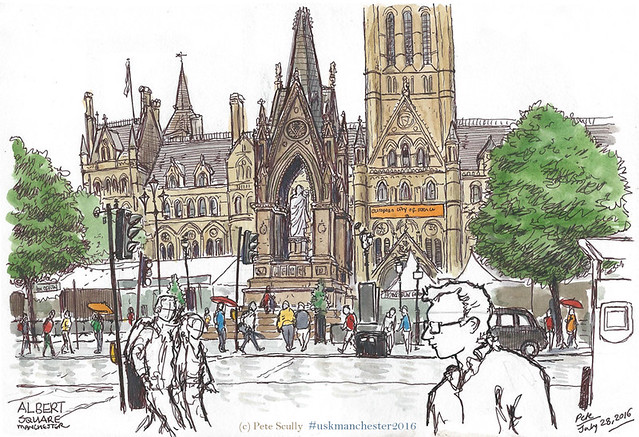 The second workshop I attended at the 7th Urban Sketching Sympo – er,”USKManchester2016″, let’s just call it (that’s the official hashtag by the way, #uskmanchester2016, if you happen to be on Twitter, Facebook, Instagram, MySpace, well maybe not MySpace, anyway all those so-called media sites (that is the term right?), just use that hashtag and you will find everyone else’s Symposium stuff. It’s pretty damn wicked.) Sorry, just interrupted a sentence to shorten it with a longer sentence. Ok. The second workshop I took in Manchester was called “Capturing the Crowd“, taught by James Richards, assisted by his wife Patti, and held up at Albert Square (no, not that Albert Square, a real and much better one). 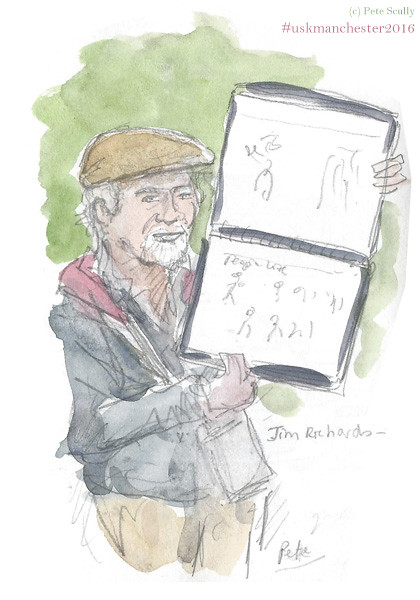 Jim is an excellent teacher who went through everything step by step, how to construct a scene with a crowd of people in it, tips on detail and colour, tricks for poses and perspective. I’d not met him in person before so it was a real treat to learn from this master, especially as I have been trying more and more to add crowds of people into my location drawings. The only thing we didn’t really have was a crowd – that afternoon was pretty rainy (hello Manchester!) – but that wasn’t a problem. People were always walking past, and if you draw enough of them, then voila – you have a crowd!

There is Jim on the right there, I managed a very quick sketch while he was going over the mechanics, as it were. He was extremely well prepared. Now I won’t go over every aspect of what he taught us, but if you pop over to Jim’s website, he has put together a thorough step-by-step demo.

Here are the first quick sketches I did in the workshop, just rapid sketches of people as they passed by, working on poses and using people to create perspective. The final drawing I did is at the top – I stuck around the finish it after the workshop had ended. The rain didn’t last all afternoon, though I stood beneath an arch. I did bump into former USk London sketcher and animator Nathan Brenville, who was visiting family in the north (he now lives in Madrid). He has a colouring-in book coming out soon which is all about Maggie Thatcher!

Cheers Jim! Check out more of his lovely work at www.jamesrichardssketchbook.com/

*Ahem. After this I was supposed to meet up with other sketchers at the Peveril of the Peak pub, but I totally got lost TWICE. Even after being given directions. I made it eventually…

4 thoughts on “Capturing the Crowd (with James Richards)”