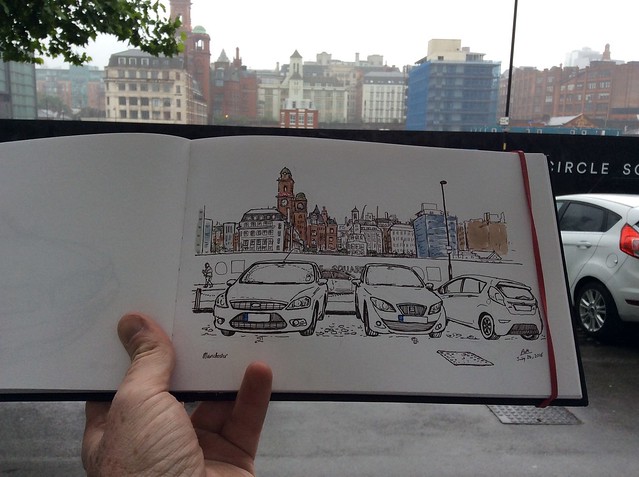 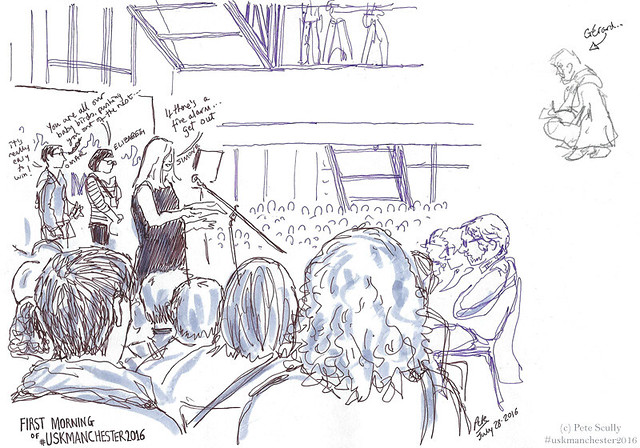 The 7th International Urban Sketching Symposium kicked off on the Wednesday evening with a big gathering at Manchester Town Hall in a huge, wonderful room that was not unlike the Great Hall at Hogwarts, but more ornate and elaborate. I didn’t however take any photos or do any sketching, busy as I was meeting with old friends and chatting away. I did got for dinner afterwards and sketched there but I will post all the ‘dinnertime’ sketches separately I think. I’d like now to dive into the Symposium itself – above is a quick sketch I did of the first morning introduction session, with Simone Ridyard, Elizabeth Alley and Omar Jaramillo there. It was time to go and sketch, and my first workshop was one I was really looking forward to: “Cars in the City“, with Lapin and Gerard Michel. 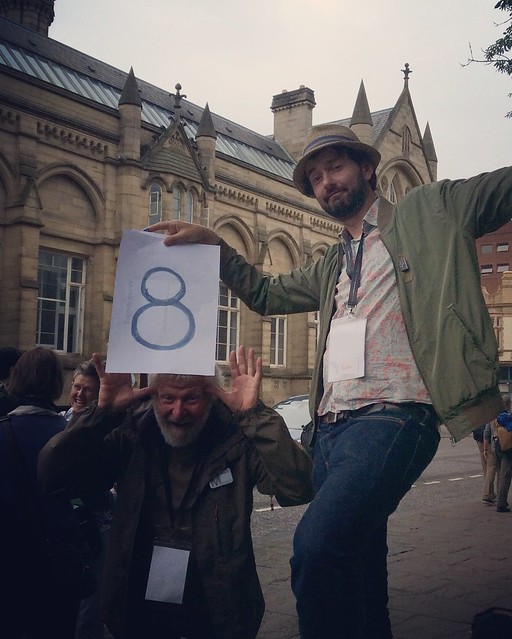 Yes indeed. I’ve known Lapin and Gerard since the first Symposium (though have followed their work since the start of Urban Sketchers), both have very different approaches but have a big love of drawing cars, especially classic vehicles. This workshop of course was originally to be co-taught with Florian Afflerbach, the great sketcher of cars who sadly passed away earlier this year. I took a workshop Gerard and Florian co-taught in Lisbon, teaching me a lot about perspective. While this workshop was not necessarily about large scenes and mastering vanishing points, the workshop did focus very much on how the eye perceives the world based on our distance from what we are sketching, and Lapin and Gerard did a good job of showing us what they mean. 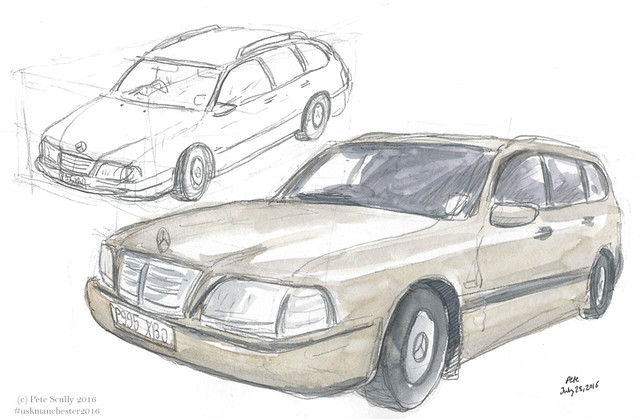 Our first assignment was to sketch a car from a distance of about a metre or so, maybe a little more. The view of the car would be more typical, and they gave us an example of how to work out the shape using simple boxes. My first car happened to be a Mercedes, and I drew in pencil (thinking again of Florian), keeping a little way back from the car, crouched, as it looked very much like it might rain. Oh and by the way it certainly did rain. 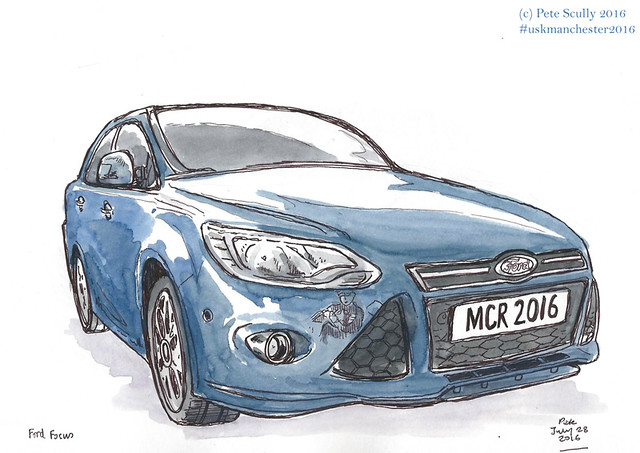 So we found a car-park not too far away which was sheltered beneath an overpass, and sketched in there. Lapin asked us to sit very close to the car we wanted to sketch – the closer you sit, the more warped the perspective would start to look. This is a good rule for perspective – you position matters enormously, and even slight changes to your position can alter the perspective of what you are drawing immensely. I found a blue Ford Focus – hardly a beautiful car but still attractive for the sketch’s purpose. I drew my reflection in it and also changed the number plate to something more fitting the Symposium. Lapin came and said, sit even closer! I was pretty close, but still two feet or so out – he suggested going right up to the car, and seeing what happened. His suggestion to the class was that we don’t think about perspective rules, rather, just see what is in front of you as a series of shapes, and draw the shapes, letting the picture unfold itself. For my next car then I chose a Rover 400 (below), a more classic British brand, and sat right up to the headlight. 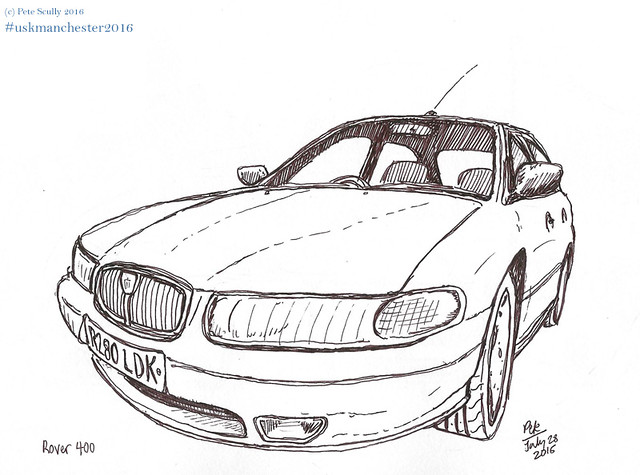 Well I think you can see the difference! Immediately everything bends that bit more, yet the sketch really starts to pop out. This is something I would like to try a bit more. We ran out of time before I could add colour, and we had a little gathering to discuss what we had learned, but the parking attendant in charge of the car-park came along and booted us out; I guess the car park is private property, but it was good shelter from the rain. We moved along to a spot around the corner for the final part of the workshop, drawing cars with the city around them. This was very much Gerard’s part of the class and he showed us some examples; including the cars in the foreground of the sketches helped to add depth but also some foreground anchor to help understand the perspective of the scene. there was a nice spot away from the rain next to an office block, showing a clear view of Manchester’s skyline (thanks to a building having been demolished, I believe it was something to do with the BBC). We did go into the building and ask permission to sit beneath it and sketch, and they were fine with it. It was a very interesting view, with the Palace Hotel there, but oh so rainy. 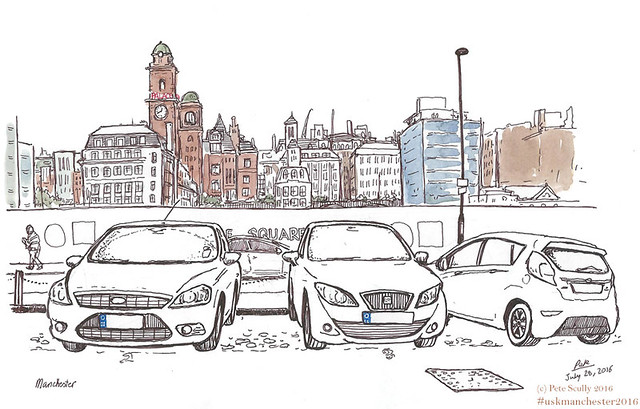 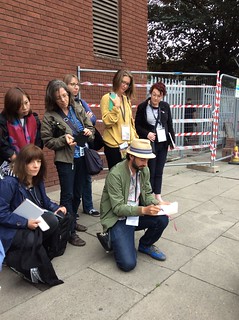 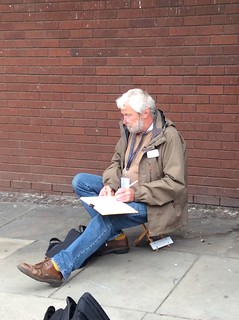 Many thanks to Lapin and to Gerard! Awesome instructors!