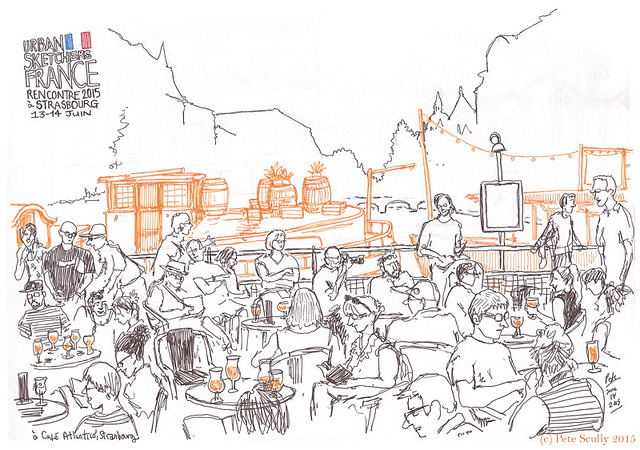 When I first read that Strasbourg was the location for the third annual Urban Sketchers France ‘Rencontre Nationale’, I knew I finally had an excuse to go back there. I still left it a long time ultimately deciding, but I tied it into a short visit back to London (to surprise my dad for his birthday), and then threw Aix into the mix as well. I had wanted to go to one of the French ‘rencontres’ since the first one in Lyon a couple of years ago. These are literally just large gatherings of urban sketchers from all over France (and neighbouring countries too), serving as sketchcrawls held over several days, informal, relaxed and friendly. I like the International Urban Sketching Symposia, the sixth of which is now taking place in Singapore, but they sometimes feel like a lot of rushing around and can be pretty overwhelming, with all the workshops and organization. Sometimes I prefer something a bit more simple, like this (that said, I do really wish I were at the Singapore symposium sketching with everyone!). The sense of freedom afforded just wandering about a city with no time restraint, but still having the opportunity meet and learn from other sketchers, especially those whose work you’ve followed online, is great, and I really love following Urban Sketchers France. Of course, I’m often shy and my French is atrocious so those don’t go in my favour, but thankfully there were several familiar faces here!

The 2015 Rencontre National USk France was organized largely by local illustrator Lolo Wagner, who had put together an impressive programme of information and suggested sketching routes and locations, as well as places to stay, to eat, to drink. Every evening after the sketching was done the croqueurs urbains would meet up en masse at the Cafe Atlantico, on the banks of the river Ill, to boire un verre and check out sketchbooks. If you wore your USk France badge you got a good price on your beer too. As you can see above, it was a pretty nice location to end the day. We also met up on the Saturday evening for a large group get-together to eat tarte flambée. Many sketchers stayed at a local hostel called CIARUS, a place I myself have stayed a couple of times back in the late 1990s (a nice place too).

I sketched the scene at Cafe Atlantico (top sketch), and you may notice that the page is a bit dirty. What happened there was that I was talking to some people, and my hand which was covering my page luckily saved the sketch from a random bird’s dropping, falling from the sky. That was a good save! So I joked about how American I am now because I am prepared with hand sanitiser and wipes, and I put my sketchbook down for a moment on the ledge next to me which was also the sidewalk and…a bike cycled over my book. It was right by the railing, not like in the middle of the street, but it left a big tyre mark across the page. Oh la la, I said. The cyclist apologized, we all shrugged (gallically of course), not that big a deal. He said it makes it look more artistic. No, not really, it looks like a bike cycled over it. I got most of the track marks off, but you can still see it, and I decided not to get rid of it in the scan because – the cyclist is right – it does at least mean I can tell this story. It’s not necessarily a very good story, but it’s a thing that happened. 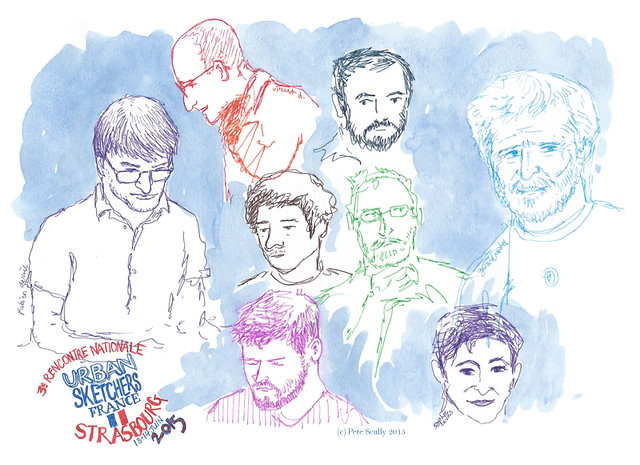 As I mentioned, we got together on the Saturday evening to eat Tarte Flambée at the Brasserie De La Bourse, a large 1920s-era restaurant in between Place d’Austerlitz and Place de l’Etoile. I don’t eat certain meats, so my tarte flambée came without lardons, but normally this most Alsacian of dishes – which is kind of like a flat pizza-like bread covered in cheese and onions – usually comes with little strips of pork called lardons, a bit like bacon. They love lardons in France, and my non-pork-eating status means I’ve missed out on many lovely French dishes (in Aix one of my colleagues often came to our apartment to make ‘tartiflette’, which was delicious but I had to pick the lardons out.

There were some sketchers I knew and a few I was meeting for the first time. My sketching friend Gérard Michel, the famous urban sketcher from Liege in Belgium (who I first met in Portland in 2010) was there, and it was great to see and chat with him again, and see his amazing sketchbooks. If you’re not following Gérard Michel on Flickr, your really should be. If you want to see what you can do with the art of perspective, have a butcher’s at his album ‘Perspective Games‘. Mind-blowingly good. I keep hoping to finally have time to visit Belgium again to sketch architecture with him, and the Liege crew. His nephew Fabien DeNoel, who I first met in Lisbon in 2011, was also there, and his work is equally as impressive. I sat with them and some other Liegois sketchers, in fact there was a large Belgian contingent at the Rencontre. I had met some others such as Corinne Raes  in Lisbon and Barcelona (she’s great and I got to meet her husband Werner, who took video at the Rencontre), and it was nice to meet a few more too. I also finally met Dutch artist Rene Fijten, whose work I’ve admired for many years, he’s a nice guy. I had met Paris sketcher Martine Kervagoret a couple of times before so it was nice to see her again, I like the Paris urban sketchers. I met for the first time some of the sketchers from the Aix-en-Provence group, such as Caroline Manceau (I think she actually lives in Marseille) whose work is great, and Nicolas Doucedame, whose sketchbook was mightily impressive. I really hope to sketch with the Aix group in the future, they organize regular sketchcrawls down there in my old home. A couple of other sketchers I met whose sketchbooks really impressed me were Sophie Navas, who I think is from Clermont-Ferrand and had some amazing sketches (I did meet several Clermont sketchers when I was in Barcelona, and I’d love to finally attend the Rendez-vous de Carnet de Voyage in CF some day, it’s just I never get the time), and Vincent Desplanche, who had an unbelievable amount of sketches in a short time, and is my new hero of the two-page spread. His style is loose, in pencil and watercolour, but so effective. 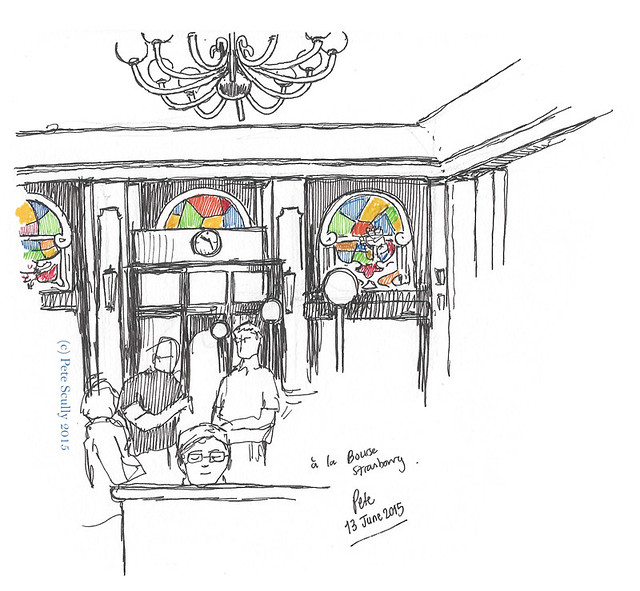 I did sketch at dinner a little, the restaurant windows above, and a few sketches of people (further above), including Gerard, Fabien, Vincent, Sophie and others whose names I have forgotten. However I struggle with sketching people, especially when I am surrounded by people who sketch people, I get more self-conscious than usual. I daresay if I was in a room full of fire hydrants, someone who doesn’t sketch fire hydrants may feel the same way, but I did my best, and in fact went one better. It wasn’t my idea (it was Fabien’s) but I did a sketch of Gérard Michel using a local material, namely the Tarte Flambée. And it actually did make a good likeness, or at least a better likeness than my pen sketch, I think I captured his famous smile. He loved it; here it is: 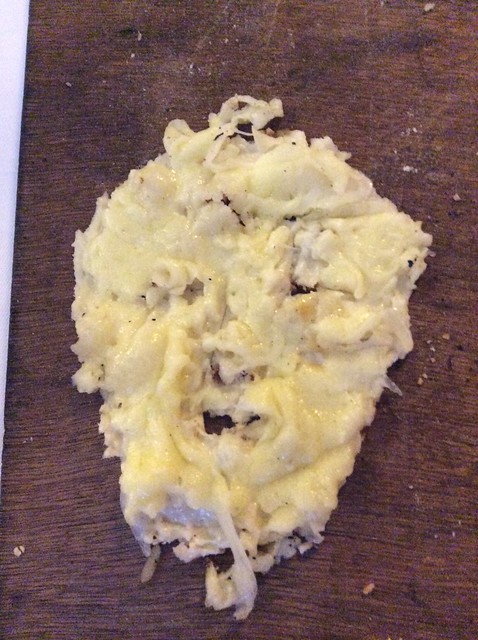 But we urban sketchers, Gerard and me and all the others, we sketch architecture, and cathedrals the most. Ok it isn’t to scale, but here is Strasbourg Cathedral, made out of Tarte Flambée. I’m sure I’m not the first. And it tasted great! 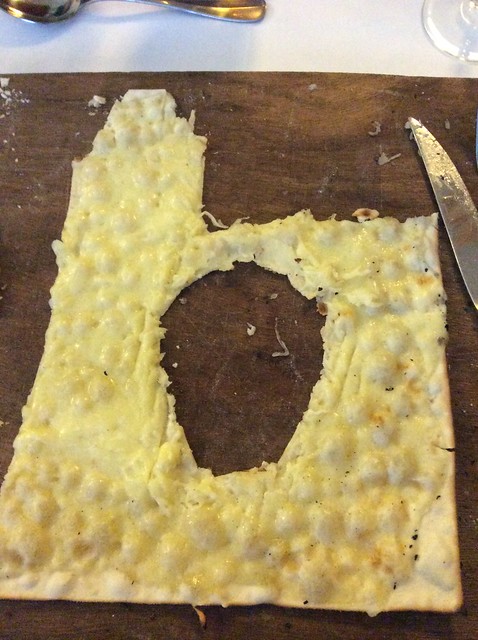 You can see some great posts from the Rencontre by USk France members at the Urban Sketchers France website (tag “rencontre USk France”). This post is particularly nice as it shows the group photo (taken by Marc van Liefferinge) as well as a newspaper article in DNA (Derniere Nouvelles Alsace): http://france.urbansketchers.org/2015/02/rencontre-usk-france-2015.html.

Lolo Wagner also put together this great album of photos from the Rencontre on Flickr: https://www.flickr.com/photos/lolowagner/sets/72157654652186532

In the meantime I have more sketches to come…