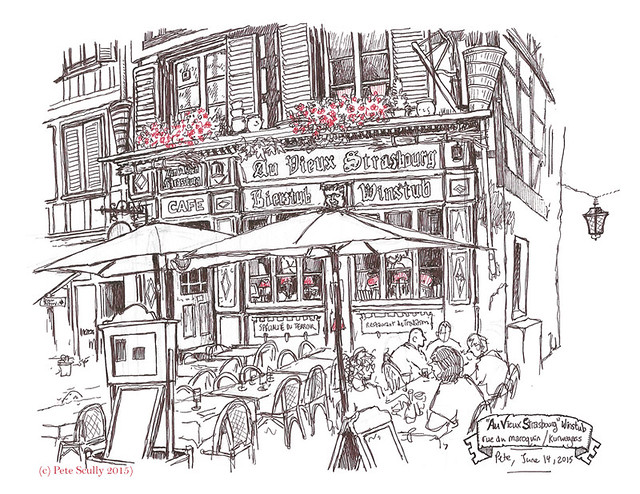 Here is the final post with my sketches from Strasbourg, though there will be one epilogue with a map. This might end up being quite a long post, so if you like long posts with a few sketches and a lot of talk about things from previous trips that I can barely really remember properly, then this is for you. Or if you prefer just looking at the pictures, you can do that by scrolling past the text, looking at the sketch without all of the barely related context, and you get the same effect. I do like to offer an insight into what might have been going through my mind when I sketch though, which is basically the side of the drawing that I see when I look at it, but you as the non-Pete can’t see. To be sure, you have the undoubted advantage of seeing a sketch just for what it is, while if I post a sketch of, for example, a bike shop in Davis, I can say that it reminds me of a podcast about the Peasant’s Revolt that I was listening to at the time, or the music that was playing in the bar down the street, or the smell of the food someone was eating as they walked past, or it reminded me of the time when my bike broke down and I had it fixed, or the time when and so on and so on.

Take the sketch above, which is of a winstub/bierstub (it’s what they call cute little places where you can drink beer or wine in Alsace), “Au Vieux Strasbourg“. This is just down the street from the Cathedral on what is very much one of the main tourist runs. I stood against a wall and sketched as all nationalities walked by. To my right was a man selling little paper puppets in the street. These puppets would dance, all by themselves, making people (mostly kids) laugh and give money to buy one. At one point, the vendor sat at a table and had a drink at Au Vieux Strasbourg, and another man came long, and tried his best to figure out how the puppet was dancing. He looked at me, a glint of excitement in his eye and said “it’s on a line! I can see it, it’s on a line!” Obviously this was in French. “No,” I replied, “it’s magic. See?” “No, no, no,” he said, “it’s on a line. It’s hard to see, but it’s there.” “It’s hard to see because it’s magic,” I insisted. I don’t know how I became the spokesperson for dancing paper puppets but if there’s a cause I’m willing to stand up for, then well. He scratched his head as if he had made some revolutionary discovery but still didn’t quite believe it. ‘Sacre bleu’ I thought, and just carried on drawing, while the puppet master, still sitting with his cold drink, just shrugged. I actually couldn’t see the line, so it might have been magic. Further down the street, two musicians who had been playing an accordion and, I don’t know, something else, were joined by a middle aged American who decided it would be brilliant if he whistled loudly and in great tune along to their music. It reminded me of the guy Walter from the Muppets movie a few years ago. More puppets. When I was done, I had a cold beer at Au Vieux Strasbourg, and watched the world go by, and the little puppets kept on dancing. 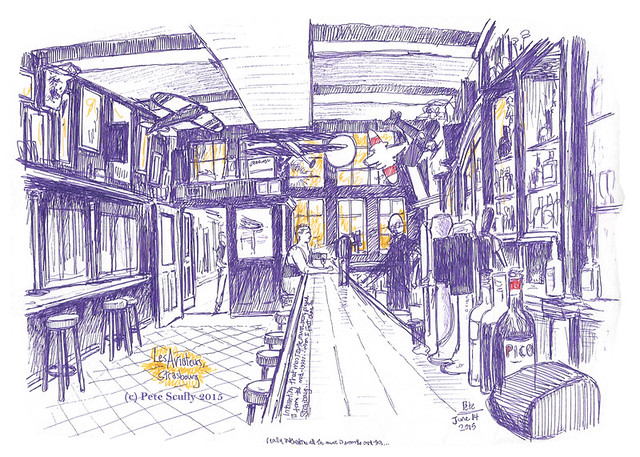 This is the interior of “Les Aviateurs“, an American-themed bar I had heard of years ago but I don’t think I ever visited. There are model airplanes on the ceiling. As I was walking back to my hotel from the Cafe Atlantico on the Sunday evening, thinking about dinner, I happened across it. So after dinner I made a point of coming here to do a sketch. I was pretty exhausted, so I just had one drink and sketched furiously until my purple pen expired. There was only one other person in there for the most part, other than the barman, who chatted to me in English because, as he said, one needs to practice a foreign language otherwise you really do lose it, it”s not like riding a bike. Amen to that my friend, that’s exactly how I felt with my French on that trip. This bar is cool, and has been here since 1984, so I am glad I was able to find it and sketch it (here is their website). The music was all British indie music from the mid 1990s which was very appropriate. 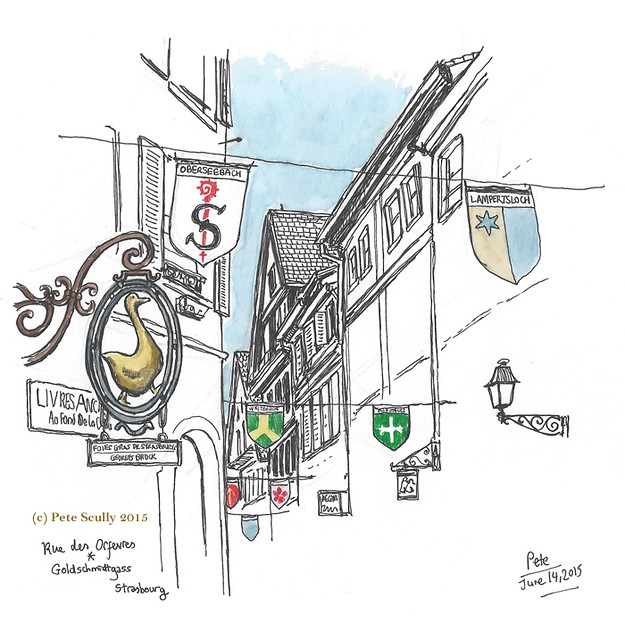 There are a lot of municipal flags of towns from all over Alsace hung above the streets of Strasbourg. At least that is what I presume they are, and I think it’s a fairly good guess.I like that green one that looks a bit like a pair of y-fronts. This was on the rue des Orfevres, also known as Goldschmittgass, and this Foies Gras vendor that I stood next to had a golden goose as its shop sign. Strasbourg however loves its storks, they are the symbol of Alsace and the mascot of tourist shops everywhere in the city. I never sketched those. 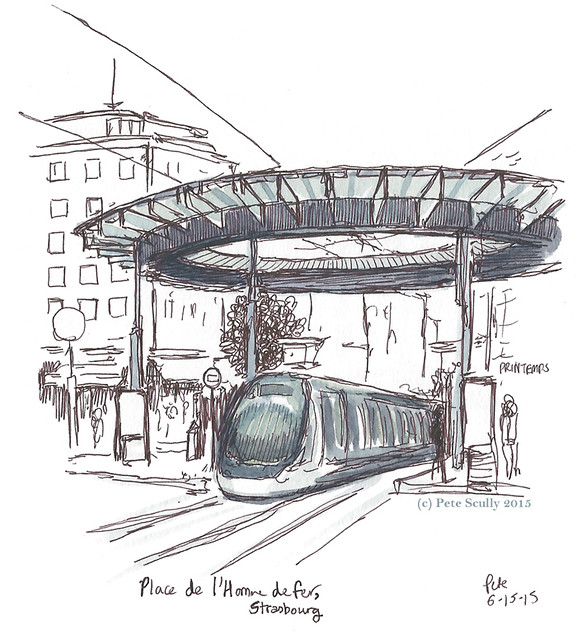 The Place de l’Homme de Fer (above) is the central downtown hub for the Strasbourg tram. It literally translates as Iron Man Place, and the large circular structure above the tram station reminds me a bit of an arc reactor. Twenty years ago when I first saw it, I had no idea what an arc reactor was (and barely remembered anything about Iron Man) so I never made that connection then. This was however, with the exception of the cathedral, the thing I was most impressed with about Strasbourg. Coming from London which at the time had the very old rolling stock of London Underground trains (the old grimy greying trains with the ghostly front face and the partially wooden interior, not the shinier more colourful ones you get now, with their LED screens and automated “the next station with this train is Colindale” announcements), the Strasbourg trams and their futuristic downtown station were a glimpse into the space age. This is what life could be like. I enjoyed riding the tram so much, arriving at ‘Langstross’ and other exciting locations. I’m a bit less easy to impress with futuristic technology now, in this age of smartphones and holograms and teleporters, but on my last day I did take a ride on the tram again just for old time’s sake. I went down to Neuhof, which was where, in 1995, I had been on that exchange trip to the Lycee Jean Monnet. I walked about the neighbourhood for a little while, remembering all the old fun of that trip, all the people that I met. It hadn’t changed very much, though to be honest I could not remember enough to say what would have been different. There was a lot of that in Strasbourg, turning a corner and another distant memory popping up, much in the same way that you remember last night’s forgotten dream the moment you hit the pillow, and then it’s gone again. I passed by the street where my old friend Roland used to live, who I last saw when we watched the 1998 World Cup semi-final on TV, France beating Croatia. There were lots of celebrating fans on the streets that night.

I was hungry, so I didn’t sketch around Neuhof, and just jumped back onto a tram and headed to Les Halles for a Quick and some more shopping (or rather, leche-vitrine, window shopping – my backpack was too small to buy all the cool things I wanted to buy, such as big new Ninjago and Marvel Lego sets at the toystore which even now are not yet available in the US, much to my son’s annoyance). 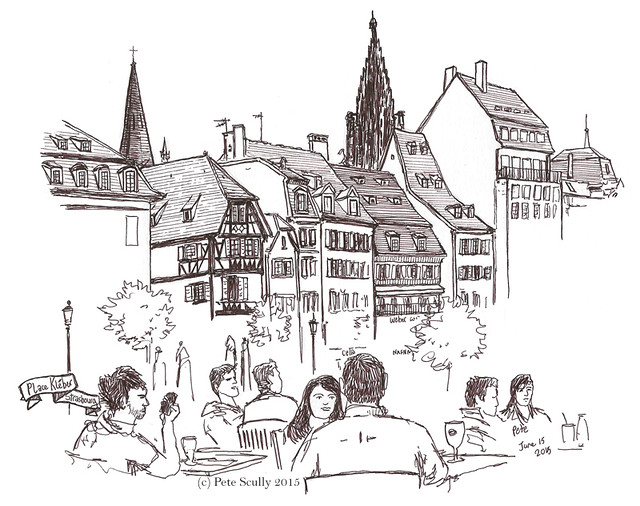 And then it was time to go home. my flight back to London was late on a Monday evening (and very cheap too, about $15, plus it took just a few minutes to get to the airport from Strasbourg train station). The Monday was my day of exploration, so I spent time in bookshops such as Librairie Kleber (I love the smell and feel of French bookstores, even if the spines are all upside down), and of course the big store FNAC. The FNAC in Strasbourg was the first ever FNAC I had been to and it hasn’t changed much. I spent ages in their BD section – that’s Bande Dessinee, or comic books. French (and Belgian) BD is amazing, especially the artwork, and often comes in large hardbound volumes. There were a good number I would probably have bought, had I not brought such a small backpack with me (Ryanair carry-on friendly). I did buy one small-ish new piece of Ninjago Lego for my son though, so clawed back a few Daddy Points for all the other Lego and Playmobil I didn’t get (I did buy him some French ‘Pokemon’ cards in Monoprix though, his friend apparently had some German ones from his dad and he wanted to go one better). I bought biscuits in nice little Alsace tins, had a take-out curry dinner which I ate on a bench on the Rue du 22 Novembre, before finishing off with one last sketch of the large Place Kleber, Strasbourg’s big central plaza. The cathedral poked above the rooftops, looking towards Rue des Grandes Arcades. The Marks and Spencer that used to be here is gone, but the McDonald’s is still here. Why mention the McDonald’s? Back in 1997 they gave me a Big Mac instead of a Chicken Sandwich. I didn’t realize until I was already on the coach back to London, so I couldn’t change it (me not being an eater of the hamburgers). My friend Terry ate it instead, and we’ve basically joked about this ever since. We agreed that if ever I went back there, I would go to that McDonald’s, slowly walk up to the counter like a bounty hunter in an Old West saloon and say, “1997, September. You gave me a Big Mac. I asked for a McChicken sandwich. That was one long, hungry bus journey. I’m here to claim my debt.” I didn’t, but it would have made a brilliant BD.