Jacksonville, Oregon. Click on the picture to embiggen it. Over the Seventh of April weekend (sorry, Fourth of July, I always get date-confused) we went up to southern Oregon to visit family, and on the 7th itself (sorry, the 4th) I was able to take a couple of hours in the baking hot afternoon to visit the historic town of Jacksonville, about five minutes away from Medford. I really love Jacksonville, and have sketched it before on several occasions (usually around Independence Day, which is particularly nice because all the flags are up). On this occasion I was desperate to draw a panorama, and so I did. I would love to draw this entire street, building by building by building. On the right there you can see a sketch I did exactly five years before (on 7/4/10), which was in black ink so noticeably darker values. In the panorama above I used dark brown ink. I did the penwork on site (except for some of the 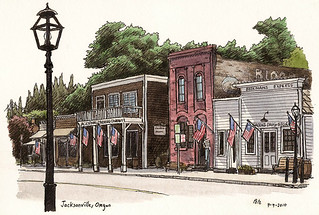 more repetitive brickwork), and did some of the colour too, to get the right shade for the hills and trees, but coloured the rest in a couple of days later.

Jacksonville was founded after the discovery of gold nearby, and retains many of its old 19th century buildings. One of the main pioneers was a man called Peter Britt. I am also Pete, a Brit. That’s a really good joke, huh, I do a lot of really good jokes like that. Anyway, Jacksonville was the cultural and commercial hub of southern Oregon  for a long time, according to their website, until the railroad was built in 1884 in neighbouring Medford, “when Jacksonville’s prestige began to wane” (anyone who visits Medford will see that Medford is clearly the more prestigious). Jacksonville still had cultural relevance though. Did you know for example that Goofy comes from here? Well not Goofy himself, but the guy who did his voice, Pinto Colvig, he was from Jacksonville. Gawsh! I met the real Goofy once at Disneyland, he signed my sketchbook. Evil Dead actor Bruce Campbell also comes from Jacksonville. Anyway, these days Jacksonville has somewhere under 3,000 residents, and the surrounding countryside with its vineyards and rolling hills is most pleasant.

After sketching, I popped into the Jville Tavern to cool off before heading back to the family get-together. The temperature was about 104 degrees (Fahrenheit, not Celsius).

6 thoughts on “jacksonville on the fourth of july”