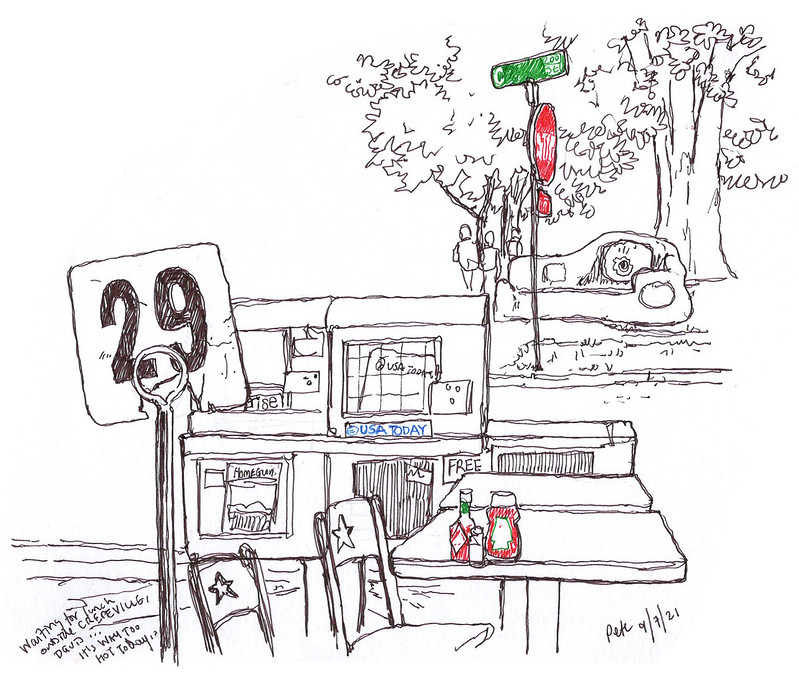 I drew this quick one while waiting for my lunch outside Crepeville, downtown Davis, on one of those very very hot days we have. Crepeville always makes me think of that Radiohead song, Crepe, you know the one, the one that goes “I’m a crepe, I’m a weirdo, what the hell am I doing here, I don’t have long hair.” Of course in America they substitute the word ‘hell’ with ‘heck’. They don’t like the word ‘hell’ as much as we do. Mind you they don’t say “flippin’eck” as much as we do, so it all evens out. My crepe was good. Of course if I in my London accent tell people that for lunch I had a crepe, they assume I spent my lunch hour in the toilet (or the bathroom, as they prefer to say here). Many people have assumed I am Australian. I learned years ago that it’s sometimes difficult for some Americans to tell the difference between a Cockney and an Aussie, but in my case it’s the tinnie of Fosters, the boomerang and the hat with all the corks in that I wear, they just assume I’m Australian. Seriously though, the last time it happened, this one guy in another department at work called me up and was asking me l these questions about Australia. His daughter was going to be spending some time there. I had to break it to him, I know you’ve known me for years, but I’m from London, never been Down Under. Furthest Down Under I’ve been is the Walkabout bar in Shepherds Bush. Another time in a shop that sold books and DVDs that isn’t here any more, the guy at the counter asked if I missed Australia much now I’m in California, and I was like, I’ve barely spoken how did he make that assumption? I nearly called him a “flamin’ galah”, whatever that is (Alf Stewart on Home and Away used to say that a lot). I was buying a DVD of “Prisoner: Cell Block H” at the time, that may have been why. Incidentally that is one of my favourite shows of all time, I bloody loved that programme. Bea Smith, Vera Bennett, Lizzie Berdworth, Joan “the Freak” Ferguson, Marie Winter, Franky Doyle, Meg Morris, Fletch the Letch, all of them. Anyway. I didn’t have time for a big sketch. I didn’t stay long while eating to draw too much more either, because the sun was starting to get to me through the gaps in the trees. The heat makes me uncomfortable. I can’t take the heat. That bench in the background, behind the stop sign, I’ve never drawn it before but I realize it looks a bit like Jabba the Hutt from this angle. This is on Third Street, Davis, corner of C Street.

One thought on “crepeville lunchtime”