A few weekends ago, I went down to the city for the day. It was my third trip to San Francisco since June, that is, my third trip to San Francisco since months before the pandemic even began. Making up for lost time, making the most of an opportunity to get out of Davis, catching up on the sketching for this year. Lately I have found it harder to fit the sketching in, what with the heat, the soccer coaching (I have been tending to spend lunchtimes desperately trying to plan practices), and also the thing about having drawn everything in Davis and the need to go and draw something new. So, I went to San Francisco, and drew some things I have drawn before. It was a Sunday, and I arrived in the middle of the city right by the Westfield on Market, where I made a beeline for the Lego store. So much great stuff. It was also lunchtime by this point, so I went to the Food court. Now on the way down, my wife had mentioned to me, oh by the way I think San Francisco requires you to show your vaccination card to get into anywhere to eat. Um what? I didn’t bring it, I had no idea. Thankfully I remembered that I had a scan of it uploaded into my UC Davis profile, which I was able to access because, for sure, they checked them before entering the food court, where I had a delicious chicken philly sub. That saved me from a day of eating Snickers bars from train station vending machines. Anyway, well fed and ready to sketch, I headed out into Market Street and looked for a building I last drew about nine years ago. It is the big one with the dome, no not that one, the smaller one with the green dome and a big sign saying ‘The Hibernia Bank’. I’ve always just called this the ‘Hibernia Bank Building’, meaning I assume it’s actually called something else obscure like the ‘Howlett-Summers-Grey Building’ or ‘Number 1 Jones’ something. But no, it’s called the Hibernia Bank Building, and it dates back to 1892. Yes, before the Earthquake in 1906, which it totally survived, probably giving it all “call that a quake?”. Well it had a bit of damage in the fire but not too badly. The architect was a man called Albert Pissis, but I’m not going to make fun of his name, that would be taking the p-, er, that would be taking the mick. It’s a great looking building though, placed at an angle against Market which cuts diagonally through the edge of the grid. Below, that’s the sketch I did back in 2012, obviously from a few steps further along the street, 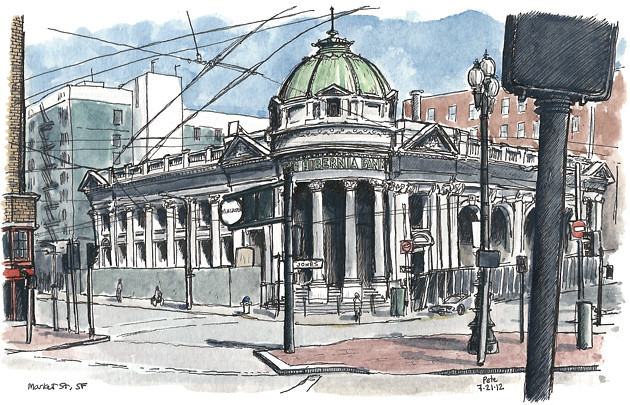 Okay, back from 2012 to 2021. Did I ever imagine nine years later I’d be sketching the same thing, but this time on the other end of a pandemic which has done what it’s done? No of course not. But drawing the same thing again over a period of many years does provide a kind of constant to anchor yourself to in time. Yes, I rewatched Lost recently, I love that oddball Faraday. When I was done with this sketch I decided I’d take the Muni up to the Inner Sunset, sketch around the Park. I had to stop though to take a look at the San Francisco City Hall. There was a market going on at UN Plaza, so I stood in the middle of the sunlight for a few quick minutes and sketched the big dome, which is the other big dome I referred to earlier. That was foreshadowing. Actually its not really foreshadowing if it’s not really a big event is it? It’s more like a callback. A small reference made earlier to a small reference I would be making later. I don’t think there will be any more of those, so don’t worry if you weren’t paying attention. So City Hall – this was where my friends James and Lauren, visiting from England, got married back in 2015, with me as the only witness. A beautiful day in the city that was, one I will always remember. The interior is pretty breathtaking, beneath that big dome. Now though, Civic Center Plaza is home to a huge homeless encampment, which is mostly fenced off. 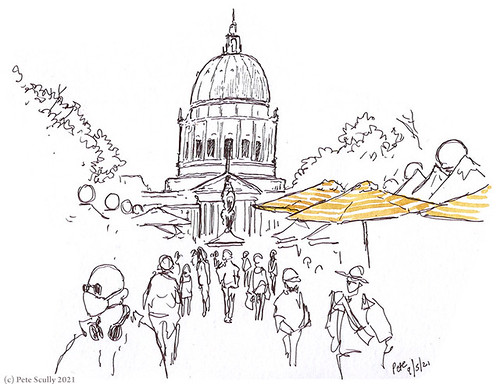 I’ve drawn this here big dome before, but I’m not going that far back. It’s further back than 2012. Ok, you’ve twisted my arm. Here are a couple – the first was done in, gulp, 2007, while the second was in a much more recent feeling 2009. Oh mate. I have been sketching San Francisco since 2006, and it turns out that’s a long time ago. Like, when I first sketched San Francisco, it was as far away in time from now as it was from when I was a gangly fifteen year old at school playing guitar and obsessing about Spurs and spending my Saturdays wandering about London or in libraries reading books about languages and drawing big fantasy buildings and writing silly stories. Haha, ok when you put it like that, maybe I’m not too different. Anyway here they are. 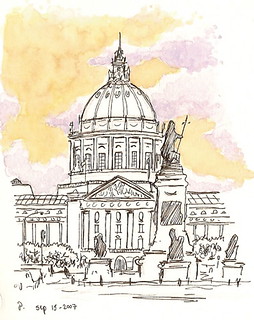 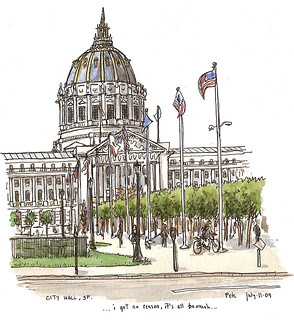 I did go to Inner Sunset but I will leave that for another post, because I can tell you need a sit down after this hike down memory lane. I think when you decide to head off on that trail, the memory lane, you need a guide to tell you if it will be ‘easy’, ‘moderate’, ‘difficult’ or just ‘bloody painful to think about’. I look at pictures from the olden days, the long long ago, and it gets me a bit sad. You can’t pause time, can you, it just won’t let you. (Admittedly we did try to back in March 2020, and we would have gotten away with it, but the months since just slid by like a shot of whiskey on a long saloon bar. Speaking of which, my next post will feature My First Interior Bar Sketch Since 2019, which is quite a milestone. You’ll have to wait for that though. 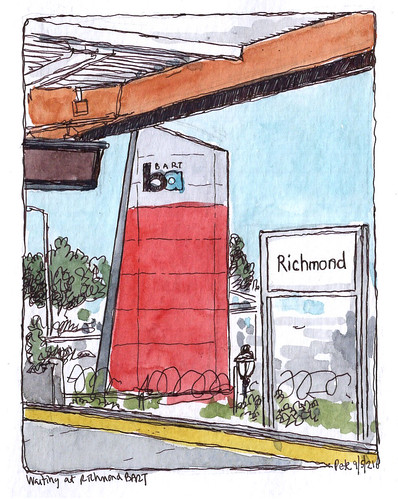 Speaking of waiting – nice callback there* – when I first arrived at Richmond station for the BART train into the city, I had to wait for 29 minutes for a train, 29 minutes that felt a lot longer than 29 minutes (just like years, the first 29 last forever, then after that you’re on a speeding train that ain’t stopping till it stops), so I got the sketchbook out, and drew. The sketch took about 15 minutes, because I needed time to fiddle about with my iPod deciding whether to listen to an audiobook or a podcast, and also there was an odd man loudly muttering nearby. Plus ça change…

(*Sorry not a callback, that was a segue)