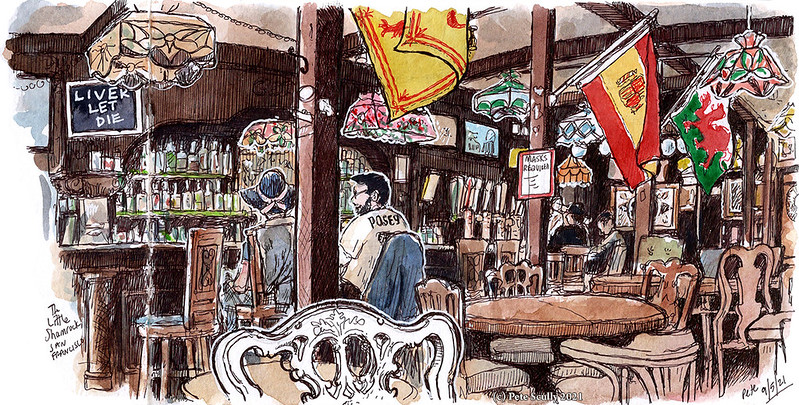 Many of my favourite things to do got sidelined during the pandemic. Going to the cinema – I loved doing that. The last thing I’d watched at a cinema was Sonic The Hedgehog; I was determined not to have that be the last thing I saw at a cinema before the cinemas all closed down and replaced with streaming. I love travelling to other countries, not exactly an easy thing to do even now. My last trip to the UK was November 2019. And I love to sketch in pubs. I love to sit at the bar, nice slow pint, sketchbook out, putting the atmosphere of the pub on the paper. Historic old pubs, all the better. I’ve missed that. So, down in the city for the third time in less than three months, I found myself in the Inner Sunset neighbourhood, on my way for an afternoon wandering about Golden Gate Park, because I’ve not really spent much time doing that. I had some new green paints and fancied drawing a bit of foliage. I am usually bored by foliage but I thought, different park innit. However, I needed a wee. I didn’t think I could wait to go looking for the public toilets in the park, so I stopped by the Little Shamrock pub on Lincoln, which dates back to 1893. As I approached, I could see through their open window that they still have a sketch of the pub that I drew in 2013 hung proudly on the wall, next to all the historic photos and articles about the old place. That was a nice surprise, and a sign that maybe I didn’t need to go to the park just yet. so I decided to stop here; you still have to show the vaccination card to get a drink, but it wasn’t very busy and I found a lovely table by that open window for the breeze (and I was sat beneath my old sketch). And over a couple of beers, I drew the scene above, which is my first pub interior since 2019. I was pretty pleased with it. It surely ate into my foliage sketching time, but pah, I prefer sketching a pub. The couple seated at the bar were, I guess, on their way to the baseball to see the Giants, the man was in a Buster Posey jersey. That brings me back to 2012, 2013 myself, when we were watching the Giants a lot ourselves. Back when they were winning stuff. Posey was the young buck; he’s still there. I haven’t watched baseball in about eight years. I think the game I was watching might still be going on. Anyway there is a lot to sketch, all the flags, all the colourful lamps, all the ornately shaped chairs. The dark areas, the light areas, oh I have missed this. I spent a good hour and a half or so in there. Here’s my old exterior sketch on the wall, I love the red frame. Makes me feel like part of the story. 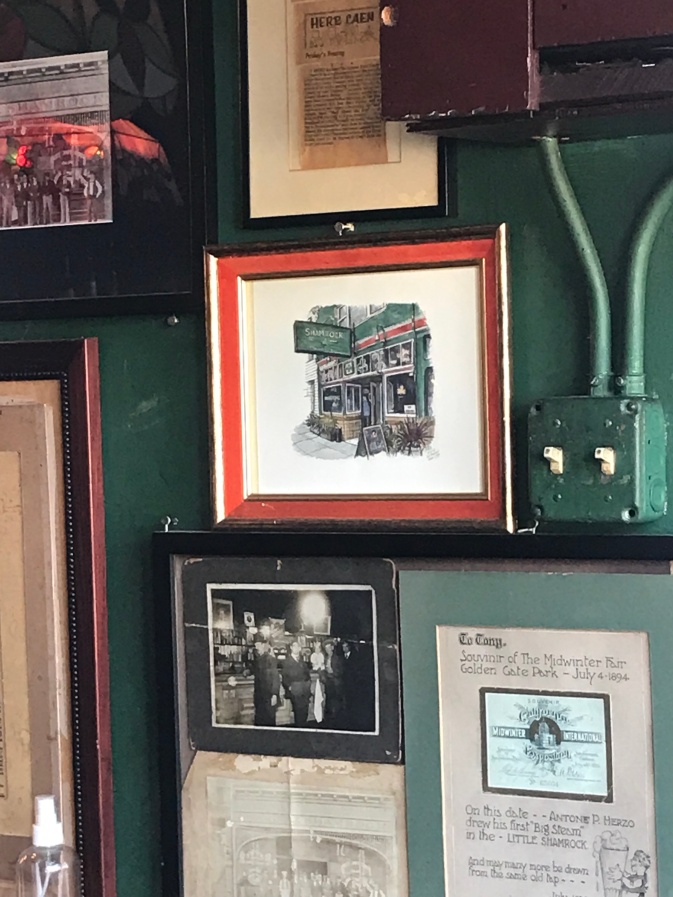 And here is my other sketch from 2013, for a bit of ‘Throwback Thursday’ on a Saturday. This was done sat at the bar. I remember listening to a couple next to me talking about the art world, I think they worked in galleries, so I knew I was in good art company. I usually am, in the city. I had just attended the annual ZineFest, and was armed with some of my own zines, that short bar-zine I produced back then, Davis Bar-By-Bar. The guy who worked there even bought one, and really liked my sketches of the day, and not too long after that they must have bought that print of the exterior sketch, because next time I came here with my wife we saw it in there. It’s a great old pub this, maybe my favourite in the city (well top two, I do love Specs down on Columbus) it would be nice to come back in the evening some day. I’m not quite ready for busy bars right now though, but this was a fun way to spend the afternoon, and involved very little foliage sketching. 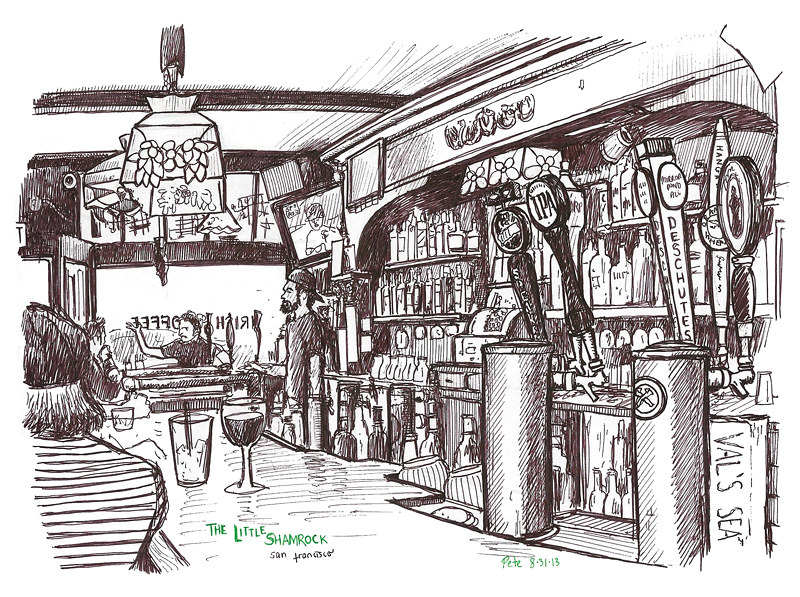 I did go to Golden Gate Park though, eventually, wandered about. But there were a lot of people, a lot of cars, and not really enough things I wanted to draw. There was a long line to go into the Japanese Gardens, and it was a bit expensive for the amount of time I’d have been in there, so I gave it a miss. I wandered without sketching, and headed back to the Inner Sunset. 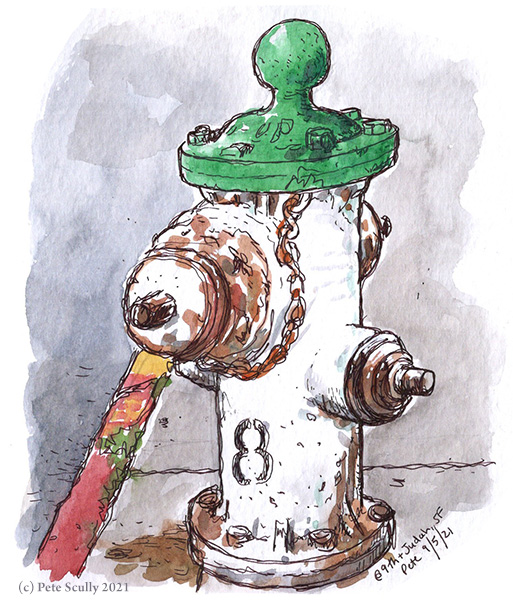 I used a bit of the green paint. After stopping for a cookie at a counter, I crouched down on the corner of Judah and 5th and sketched this hydrant with a nobbly top. There’s always a fire hydrant. These ones with the little metal bobbles on their hat are very specific to San Francisco. I was told years ago that it was for the horses, the fire horses would be tied to the big ball on top of the hydrant. That’s true, I’m going to say. It has been a while since I drew a hydrant like this too, I think. 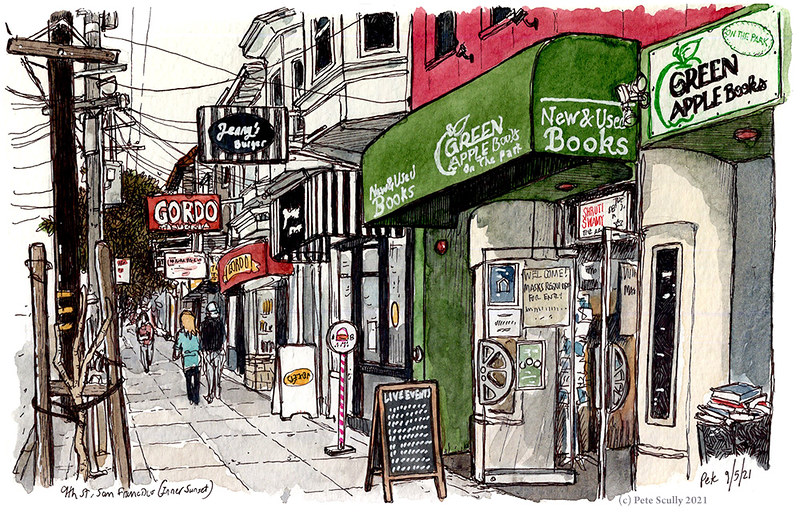 I had wanted to go across the park to the area along Clement, to finally find Green Apple Books, to explore a part of town I’d not been to. Alas I never made it. But there is another branch of Green Apple Books right here, “By The Park”, so I went in for a browse and picked up a little postcard book of artwork from My Neighbour Totoro. I had a little bit of time before I had to jump on the Muni back downtown, so I stood in the street and drew as much as a I could of the shop and the view up 9th. The fog had rolled in by this point, but it had been a really nice day. I had to finish it off later, but I was tiring and needed to get back to Davis. Another well-worth-it day out in the city, I can’t wait for the next one. I’m already studying the map for more exploring. ‘Sketchploring’. I am a sketchplorer. Or maybe a sketchsplorer?