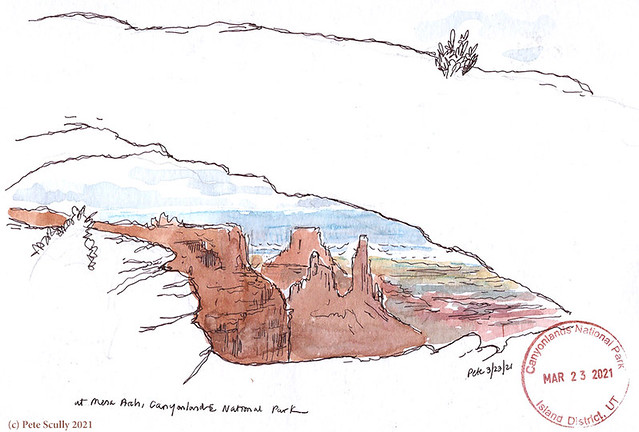 On our second day in southern Utah we drove to a much larger National Park, Canyonlands. The elevation was a bit higher than Arches, and it was a cooler day with more cloud, so we even had a few flurries of snow as we made our way out to the Mesa Arch overlook. While Delicate Arch is the place to watch the sunset, Mesa Arch is the sunrise spot for people who like being around lots of people watching the sky go from a bit dark to a bit light. We went well after breakfast when the sun was already up, so it wasn’t too crowded. Canyonlands is so big it is divided into three sections that aren’t easily connected (there are literally massive canyons in between them): the Maze, the Needles and the Island in the Sky. They sounds a little like Marvel comics prisons or Dharma stations from Lost. We went to Island in the Sky, and it’s easy to see how it got its name. The plateau floats about a network of enormous canyons that seem impossible to believe, like you are inside an enormous IMAX cinema or looking at a vast painting. I have been to the Grand Canyon years ago and the impact is similar. Well it’s the same river, the Colorado, just further upstream. Canyonlands is where the Colorado meets the Green river, making all kinds of fun patterns on the planet surface. Out at Mesa Arch the family bundled up beneath a blanket while I spent a few minutes drawing, as best I could, and various people took photos inside the opening that looks out onto another world. I had decided that I would probably not attempt to draw any canyons, they would be a little bit beyond me, as someone who typically draws fire hydrants and pubs. I wanted to catch some of the colours I saw, but I also wanted to just stop and stare, and take in the vastness without thinking about how to translate that into scratches and splotches on a sketchbook. Below, a couple of photos, looking out toward Mesa Arch, another looking out at the Candlestick, and another of the strange and otherwordly Upheaval Dome, where we hiked to next. 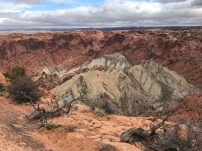 Upheaval Dome was a place of some mystery, a large crater filled with rocks of a very different colour from those around it, like the remains of a large green asteroid. I hiked as far up on the overlook as I could, but there is a much longer and arduous primitive trail that runs around the entire thing and can be quite a challenge. Not a challenge we were up for. The second day was going to one of shorter hikes with massive views, so once we were done with Upheaval Dome we drove down to the Grand View Point for a really impressive ‘Grand Canyon’ moment. I can’t really get over how spectacular the southwestern United States is, and that the National Parks do such a great jo of maintaining them so that we can enjoy them respectfully. I spent a fair bit of time in the park shop that morning getting souvenirs and what not, including metal pains, so now I want to start some collection of those whenever I go to a new one, seriously, great idea but what am I going to wear them? Grand View Point was stunning. There is a massive maze of canyons that looks like a galactic animal footprint from above. We walked along the trail going along the rim, until the family could bear no longer to be on the edge of the cliff and went back to the car. I stayed out and hiked a bit further, before heading back to the Point and deciding, sure why not let’s have a quick sketch. So I got out the Moleskine and a pencil and started just quickly drawing as much as I could see. Around me I heard as many American accents as license plates in the parking lot. It’s interesting to actually hear other North American accents in person, living in California where the accent gets homogenized into TV American, the only time you really hear different US accents with any strength is in TV stereotypes. I added in some paint and then finished off later; it was snowing, though very lightly. I was pleased with the result though, this isn’t a type of landscape I would ever get much chance to experience. Click on it to see it in more detail.

We had planned to swing by Dead Horse Point state park after our day in Canyonlands, but decided that would be a ‘next time’ visit. We had our fill of amazing views, and the park experience was so different from Arches, so we drove back to Moab for dinner and rest. We had one more day in Arches to come before our long journey back home, and the next day we would be hiking some of the Devil’s Garden.

One thought on “Utah 3: Island in the Sky”