On the third day in Moab we returned to Arches and this time started our day by exploring the popular Devil’s Garden area. This place is packed with arches, and I’m glad we got there early because before long it was packed with hikers too. People like to do the Devil’s Garden loop, a seven mile or so hike that includes some tricky scrambles over rocks but gives some amazing postcard views. We didn’t do that whole thing, but just went part of the way in. The walk to the long and fragile Landscape Arch was really pleasant, a well-worn path through some short narrow canyons, easy to get to. My son had done a state project on Utah at elementary school a couple of years ago, the main reason we wanted to come and explore Arches with him, as he had made a model of Landscape Arch and wheeled it around the playground in the “parade of states”, this is a popular thing kids learn about at American schools. This particular arch used to have a bit more to it, and the trail would pass underneath it, but then about thirty years ago a large chunk of it fell off, so now you can only get so close, in case more comes down. I overheard a geologist say to his kids while I was there, “hey kids,” (I might be paraphrasing) “he kids, I’m a geologist and I think that more of that rock might come down. All it needs is an earthquake, maybe even a bit of wind, and that rock’s gonna tumble like a lizard in a blizzard,” (Yes I am definitely misremembering what he actually said, I think the Wild West scenery probably clouded my memory a bit). Below, that’s me sketching the Landscape Arch. 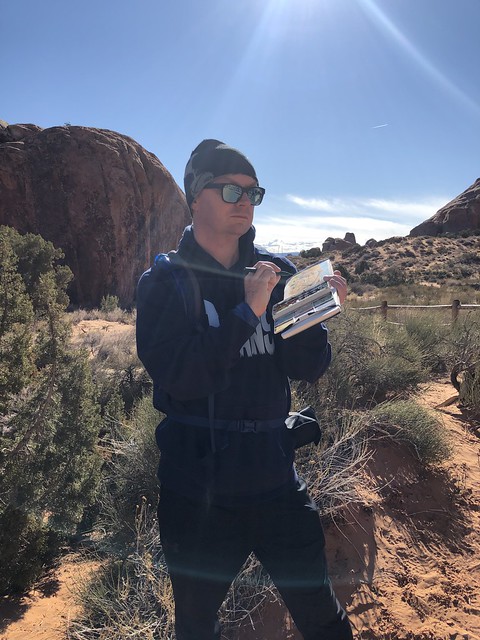 We didn’t go a great deal further along this trail, because it reached a spot with a very steep and narrow rock that needed scaling, and we weren’t feeling that brave. We watched some other people bounce up the rocks, and a few others scale cautiously, while others also sat that one out and there was a group of people in what I thought of as the ‘waiting room’ while their family members hiked on the higher grounds. I gave it a go; first time I wasn’t feeling brave enough, but after a little bit of time I thought, ah why not, and I made the climb. It was only a short climb but the drops were quite rocky, but I made it up top and went bounding around for a little bit to look for the Navajo Arch and the picturesque Partition Arch. I didn’t stop to draw as the family were still in the waiting room below, and I didn’t march off to the Double O Arch, so I’m saving the rest of the Devil’s Garden for next time. We had plenty of other arches to explore.

Broken Arches (with my Brucey pose)

We went and looked at Pine Tree Arch, before doing the sandy trail between the narrow slot canyons around Sand Dune arch. That was a huge sandpit full of kids playing, while others bounced about the rocks. We then walked across a plain of cacti and desert brush to reach the magnificent Broken Arch. That one isn’t actually broken at all, but was definitely one of the more impressive arches we saw. There were a number of people there making large echoes boom through the arch but when they left the silence was grand. A good time to stop and rest up the feet; a good time to sketch. This was one of my favourite ones to draw. 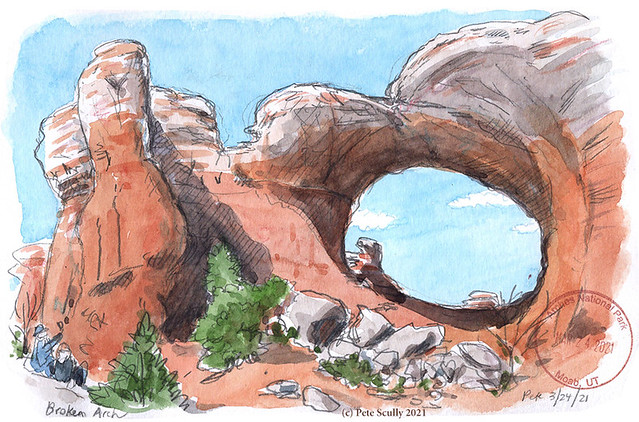 (Interjection – can I just say I really hate this current WordPress editor with all these clunky blocks? The old editor was much cleaner and easier)

After this arch we were getting tired, so we made only one more stop, and what a stop. The Park Avenue trail is short but looks exactly like the backdrop of a Western. I walked into the valley for a bit before heading to the giftshop and back to the hotel for a rest. Arches was well worth the effort, and now that we are officially hikers we’ll be back some day.

One thought on “Utah 4: Devil’s Garden”