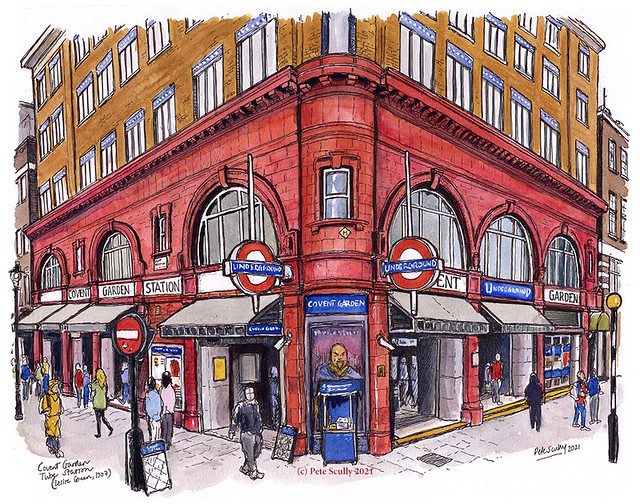 For this year’s Pence Gallery Garden Tour show, they couldn’t actually have the in-person garden visits like they have done in years past, with the artist painting or drawing in the garden (and sneezing, in my case) while visitors looked about at the pretty plants and flowers and then we exhibited our finished artwork at the Pence later. I’ve done it a few times and it’s fun (apart from the sneezing). But as I say, they can’t do that this year so instead they are having a garden-themed show, and asked us to submit our garden-themed artwork. I don’t have a garden (just a small back yard with not much in it) and haven’t been sketching much foliage this year yet, but…well I have been drawing old Leslie Green tube stations from London, and I hadn’t yet got around to drawing Covent Garden…that is garden themed, right? It’s one of my favourite gardens after all, and I really love drawing these old Leslie Green stations. I drew a whole load of them last summer, using only three colours (QOR watercolor paints Nickel Azo Yellow, Ultramarine, and Quinacridone Magenta – I don’t often use a limited palette but these very strong paints were a winning combination). I just realized while searching for those old posts to link to that I never actually posted them here, so I guess I’ll need to write a new post about those old stations…soon. Maybe I will draw a few more first.

I miss London, and I especially miss wandering about the little shops of Covent Garden. I don’t miss the tube station itself (I never get off there; coming down on the Northern Line I always get out at Leicester Square and walk up, it’s quicker) (the distance between the tube stations of Leicester Square and Covent Garden, which is on the Piccadilly Line, is one of the shortest in London – the tube actually takes twice as long as walking, especially as you have to get into a crowded lift at Covent garden tube, ugh). (Plus I use all the short cuts to beat the crowds). After living away from London for sixteen years now though, many of those short cuts through the centre of the city are becoming lost to me, not just through memory but through construction. The CrossRail project demolished many buildings around Oxford Street and changed a lot of the geography. There was a really useful unsignposted short cut between the central and Northern lines inside Tottenham Court Road station that meant avoiding the escalators, but that is now blocked off.) Thankfully Covent Garden isn’t too changed, it’s a labyrinth as it is, but some landmarks are gone or moved, such as Stanfords map shop, which is now smaller and around the corner from the old Long Acre site. I used to run through Covent Garden’s narrow streets on the way from the 134 bus-stop at New Oxford Street to my classes at King’s College London on the Strand when I was doing my master’s degree, that was a long time ago now. I miss London. I miss the pubs, and the people from all over the world, and the stories, and the sounds, and the smells, and the memories it makes me think of every time I dash round a corner. I love living in California, but blimey I miss London.