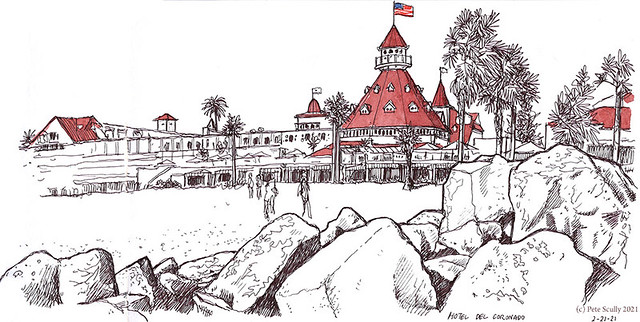 We spent a couple of days in Coronado, San Diego, at the amazing Hotel Del Coronado (commonly known just as the “Del”). We stayed pretty socially distanced – we got a fantastic room that opened right out to the ocean, with a firepit for toasting marshmallows (we made delicious s’mores). It was a once in a lifetime type of hotel room, not huge, but pretty spectacular. Coronado is pretty spectacular. The weather was beautiful (February and in the high 70s), the sunsets incredible. I didn’t draw much; we relaxed, had cocktails, looked at the sea. I did do a little sketching – I went out to the beach and looked back, and did a quick sketch which I added to later, of the Del itself. It’s a historic building (the movie Some Like It Hot was filmed here), and one that my wife has wanted to stay in all her life. This was her birthday trip and we all enjoyed it here. The Pacific Ocean was cold but we still splashed our feet in it. The sand itself glistened with a strange metallic golden sheen, I think there must be a lot of shiny minerals in this particular sand. It was also full of these strange little round objects I had never seen before, but that my son told me are ‘sand dollars’. Beautiful, delicate little things, so I drew a few of them. Apparently there are legends about these things, also called sea biscuits, that they are the currency of mermaids or from the lost city of Atlantis, I mean they might be I suppose. 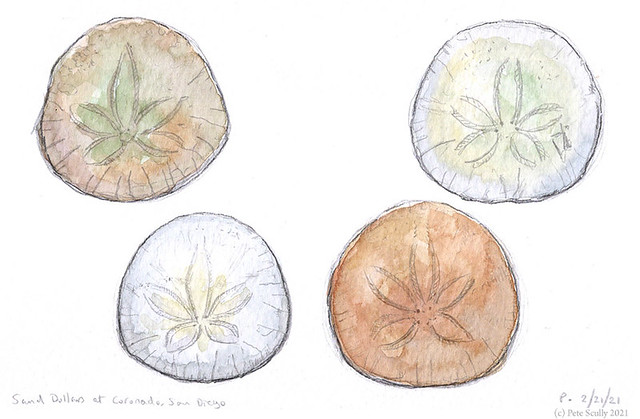 On the way to san Diego we did stop at one historic Mission, the Mission San Juan Capistrano. It’s pretty big with a lot to see; it’s pretty expensive too, and cost almost $40 for the three of us to go in. I had to get at least one sketch. Much of the older parts are just rubble, destroyed by an earthquake not that long after it was founded (they must have known even then not to rebuild those bits, so they could charge people a lot to have a look at them years later). Still, these historic places need a lot of upkeep and we want them to be open for us to see and learn from, so it’s worth it I suppose. I had been reading a Bill Bryson book on this trip, and he regularly infuriated me whenever he would turn up at a museum he had taken a while to get to, then baulked at a small entrance fee and refused to go in, before going off to a cafe to complain about their sandwich prices and moan at serving staff for not understanding punctuation, or something. Seriously, Bryson. 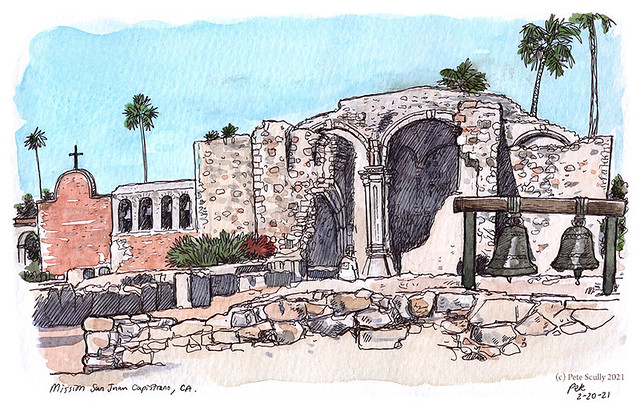